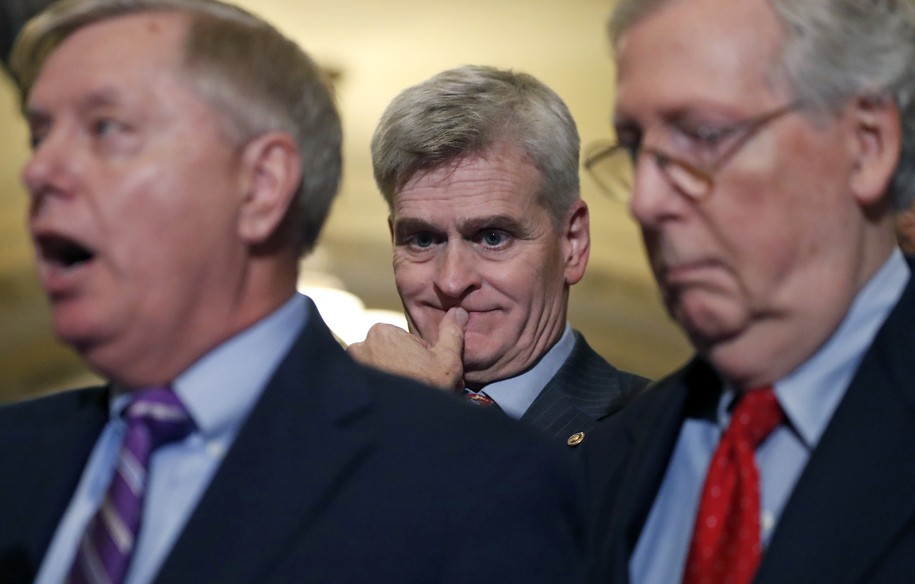 Republican Sen. Bill Cassidy of Louisiana is now exhibit A of why many GOP senators are simply too spineless to examine the impeachment case against Donald Trump on its merits. On the opening day of arguments over whether the Senate had the constitutional authority to proceed with the trial, Cassidy had the audacity to actually weigh the arguments by Democratic impeachment managers against the Micky Mouse presentation offered by Trump’s defense attorneys and conclude it was no contest.

“It was disorganized, random,” Cassidy said Tuesday of the defense while explaining his vote to proceed with the trial. “The issue at hand, is it constitutional to impeach a president who’s left office? And the House managers made a compelling, cogent case, and the president’s team did not.”

D’oh. The issue at hand? How dare he! The Louisiana State Republican Party sprang into action, declaring itself “profoundly disappointed” that Cassidy was supporting a “kangaroo court” that amounted to an “attack on the very foundation of American democracy,” according to The Washington Post.

Cassidy, newly elected to a six-year term in November by a 40-point margin, seemed unfazed. “As an impartial juror, I’m going to vote for the side that did the good job,” he said. Cassidy was so persuaded by the tightness of House Democrats’ rationale that he actually flipped his vote on the constitutionality question from last month, when he voted in lockstep with 44 other GOP senators against the legitimacy of the Senate trial. This time, he joined the other five GOP senators who parted with their peers both times on the matter: Sens. Susan Collins of Maine, Lisa Murkowski of Alaska, Mitt Romney of Utah, Ben Sasse of Nebraska, and Patrick Toomey of Pennsylvania.

Cassidy is clearly a rare GOP bird at the moment, and he may feel empowered by his overwhelming reelection and the fact that he’s got six years to live down this vote. Who even knows what form the Republican Party will exist in by then.

But the conversation between him and his state party is exactly what Republican lawmakers across Washington fear—or at least those Republicans who have any hints of sanity left. Under Trump, the state parties radicalized and high turnout in 2020 worked in their favor in downballot races even as a decisive number of conservative voters split their tickets to reject Trump. So Trump or no Trump, those parties are clinging to the electoral successes of 2020 as they draw the battle lines for 2022.

Frankly, it should be fascinating to see how Trumpism performs in 2022 without Trump on the ticket. Based on past statewide races in Kansas (2018 gubernatorial), Louisiana (2019 gubernatorial), and last month, and Georgia’s two Senate runoffs, Republicans have repeatedly lost high-stakes contests where Trump wasn’t present. So state Republicans are betting on pro-Trump fervor to carry the day in 2022 in a situation where Trump won’t be on the ticket, many of his supporters actually believe the GOP has betrayed him, and many other conservative voters are leaving the party altogether.