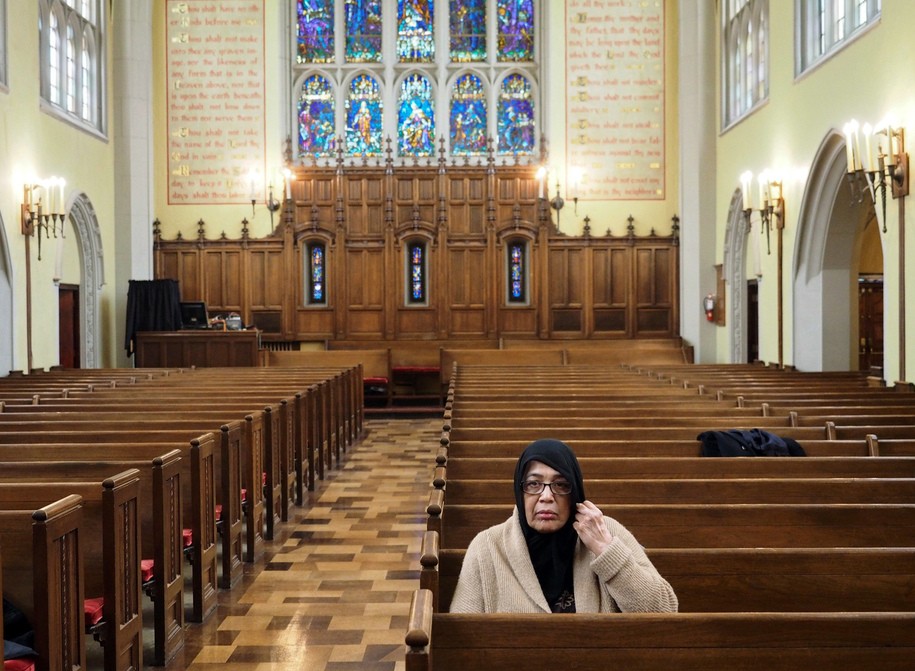 After nearly three long years, a 65-year-old asylum-seeker will soon be able to leave the Kalamazoo, Michigan, church that has helped protect her from mass deportation agents. Saheeda Nadeem first went into sanctuary in March 2018, after Immigration and Customs Enforcement (ICE) threatened to deport her to Pakistan, which she hadn’t visited in four decades, The New York Times reports. Her son, a Deferred Action for Childhood Arrivals (DACA) recipient, would likely have to leave along with her.

So since 2018 and throughout the novel coronavirus pandemic, Nadeem has called First Congregational Church home. But the Times reports that following the implementation of new immigration priorities by the Biden administration, Nadeem received wonderful news on Wednesday: Not only was the threat of deportation against her dropped—meaning she could now safely leave sanctuary after three years—but her visa application would be getting expedited.

The Times reports that Nadeem had to travel to meet with ICE officers as part of the order of supervision, a process that Michigan Immigrant Rights Center (MIRC) managing attorney Susan E. Reed said understandably made her “quite nervous.” From the earliest months of the previous administration, advocates condemned the rise of “silent raids,” when immigrants, after years of regularly checking in with ICE, began to get detained during their appointments with officials.

Thankfully, Nadeem’s appointment appeared to go fine. Reed told the Times that Nadeem received more good news when she found out that her U-visa application would be sped up. “Ms. Reed said she could not elaborate on how Ms. Nadeem had become eligible for the visa program,” but it’s a special visa that puts undocumented immigrant victims of violent crime who work with law enforcement on a path to legal status. Law enforcement must also provide “certification” as part of that process.

In a video shared by MIRC on Twitter, Nadeem expressed gratitude to her longtime supporters and for policies that helped lead to this week. “Today, I have freedom. I want to express my thanks,” she said. Nadeem “thanks Rev Nathan Dannison, MIRC’s Susan Reed, & all who have helped along the way,” MIRC tweeted. The church had even built a small apartment in the basement of the building in helping to shelter her. “While sanctuary has never been an immigration solution, we celebrate with Saheeda,” MIRC continued. “We appreciate Biden admin’s new approach & will continue to work for a more just system for all immigrants.”

🎉 Exciting news! After 3 long years, MIRC’s client Auntie Saheeda is leaving sanctuary @KalamazooFCC! New ICE priorities have provided relief for this beloved member of Kalamazoo’s community. “Today, I have freedom. I want to express my thanks.” 👀https://t.co/hDmEXquGia

While other immigrants have also recently left sanctuary—like Oneita and Clive Thompson, who left sanctuary in Pennsylvania after nearly 850 days—dozens of others remain, including two people in Michigan, the Times said. Despite the good news for Nadeem and the Thompsons, ICE remains a grave danger to immigrant communities overall. In recent weeks, ICE has targeted Black immigrants in particular, assaulting immigrants in detention and deporting others, including infants and children, back to unrest.

Even though ICE’s policy is to generally avoid enforcement actions at “sensitive locations” like churches, its also resorted to other deplorable tactics to terrorize immigrants who have been in sanctuary. Prism’s Tina Vasquez reported late last year that the agency used an “obscure law” to try to impose astronomical fines as high as half a million dollars on a number of people being shielded by churches. ICE did this knowing immigrants would be unable to pay these fines. The goal was emotional terrorism.

“I don’t know how they expect me to pay this fine when I can’t even work legally in this country,” one woman told Vasquez. “Are they trapping me into breaking the law?” Accountability at ICE and protection of immigrant communities needs to begin now, with the knowledge that the Department of Homeland Security (DHS) has wide, established authority to remove the individual threat of deportation from immigrants. The cases of Saheeda Nadeem and Oneita and Clive Thompson have clearly shown that.

“Like so many other immigrants, Saheeda’s legal fight for dignity and permanent protection from deportation continues and we will continue to walk alongside her,” Reed continued, according to MLive. “Auntie Saheeda is a dear person who has done nothing but care for others in our community; she gives us hope.  We celebrate with her today, we appreciate the government’s new approach to her case, and we will continue to work for a more just system for all immigrants.”