These state statistics are enraging, and they explain so much of our modern politics 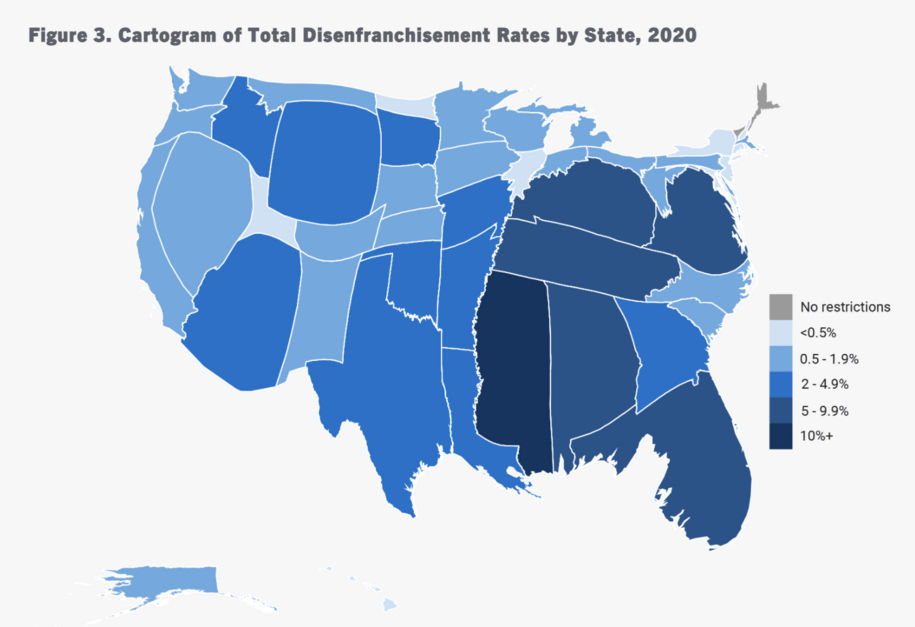 I’m pretty obsessed with and worried about voting rights these days. For the most part, I’ve been looking at Republican-held swing states like Arizona, Georgia, Texas, and Ohio, because each state government is looking to enact powerful voter suppression laws this year. That those states may soon become lost to Democrats for a generation is a terrifying notion.

The true nightmare scenario would have these states become lost causes in the same way that Deep Southern states are lost causes for Democrats. We think of the Deep South as fire-red Republican, but that’s only because so many people who might belong to the Democratic Party are disenfranchised in those states.

In Tennessee, a number of formerly incarcerated citizens are suing the state for making it functionally impossible for them to register to vote after they’ve paid all their dues and are technically eligible to cast a ballot. The situation sounds a lot like the chaotic maze Florida Republicans installed after the state’s voters overwhelmingly approved an end to felony disenfranchisement via ballot initiative in 2018.

This stat explains so much about why these states are so controlled by (white) Republicans. It also made me nauseous.

Nearly 450,000 Tennesseans, or 9% of the voting-age population, can’t vote because of a felony conviction, according to a 2020 study conducted by The Sentencing Project. Only Mississippi has a higher percentage of its voting population disenfranchised.

That’s a horrifying number and goes a long way toward explaining the partisan divide. In Tennessee, 44% of prison inmates are Black despite Black people making up 17% of the state population overall.

Now, Donald Trump won Tennessee’s electoral votes by 700,000 votes last year, so it’s not as if disenfranchisement alone accounts for the party discrepancy. Still, a culture of mass disenfranchisement leads to a culture of disenchantment. Tennessee has taken so many Black men out of the system, seizing their power and voice, removing them from the local discourse that can power activism and political evangelism.

Tennessee isn’t alone in this remarkable level of racially driven disenfranchisement. In fact, it’s just one of seven states where at least one in seven Black adults is disenfranchised. The others are Alabama, Florida, Kentucky, Mississippi, Virginia, and Wyoming—all red states except Virginia. And Virginia is about to end felony disenfranchisement for good. We also know that Florida has a massive number of disenfranchised people overall (over 800,000!), and a majority of them are Black.

This is why I’m so obsessed with not only passing a new version of the Voting Rights Act (VRA), but also expanding the Supreme Court to ensure that the new VRA (i.e., the For the People Act and John Lewis Act) stands. So many states are going to be putting a chokehold on voters of color over the next year, and if we do not expand the court, the current one will defend the racist states at all costs.

“When a party is structurally attached to lying, really anything can happen,” Aaron Belkin, a professor and legal activist who led the charge on ending Don’t Ask, Don’t Tell and is the founder of Take Back the Court, told me in a recent story for my newsletter. “One of the things they lie about is elections, which is exactly what you saw last month, and that’s a very quick road to tyranny. The only path to de-radicalizing Republicans is to force them to compete on a level playing field.

“If they had to appeal to a majority of Americans, if there were no voter suppression or gerrymandering, if campaign finance limitations were restored, it would be much harder for them to win or engage in magical thinking, because they couldn’t appeal to the majority of the public on the basis of conspiracies and lies,” he adds.

Imagine if all disenfranchised people could vote—the kind of civil participation that would be fostered, the number of new activists who would be minted. County and local political parties could be revived and turned into formidable machines. And most importantly, people who are being unfairly punished, often on the basis of their race, would have a say over their government.

P.S. I have a political newsletter called Progressives Everywhere, which focuses on health care, voting rights, workers’ rights, and criminal justice reform—especially in red states. We’ve raised over $5.8 million to help flip seats in tough districts and red states. Last week, I did a big story on progressive ballot initiatives in red states with a leader of the ballot movement. I’ve helped put the spotlight on then-unknown progressive candidates like AOC, Mondaire Jones, Katie Porter, and many others during their primaries. It’s news you won’t find anywhere else—or at least, it’ll be in the newsletter before you’ll find it anywhere else.

It’s free! You can subscribe to the newsletter here!