This suburban St. Louis district hosted one of the closest presidential contests we’ve ever seen 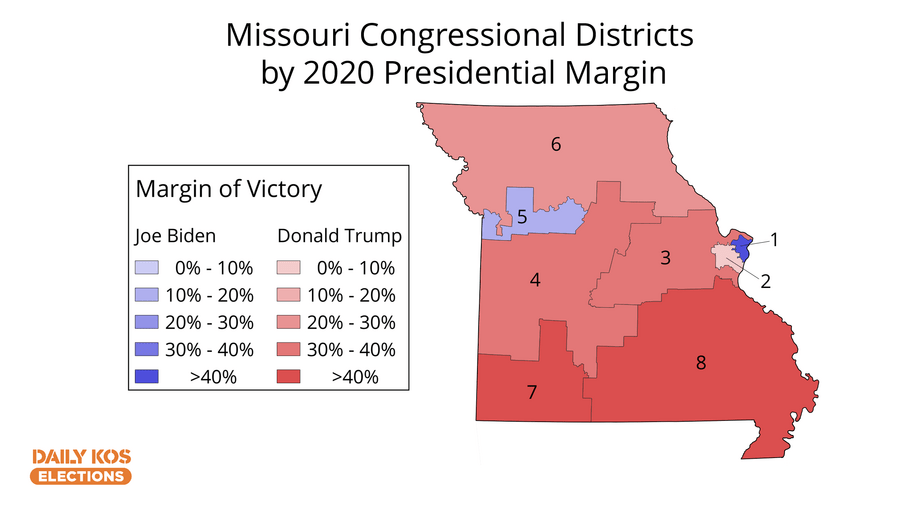 Our project to calculate the 2020 presidential results for all 435 House seats nationwide tours Missouri, which was home to what will almost certainly be the closest district-level presidential outcome in the nation. You can find our detailed calculations here, a large-size map of the results here, and our permanent, bookmarkable link for all 435 districts here.

The site of that election was Missouri’s 2nd District in the St. Louis suburbs, which Donald Trump won 49.18-49.16―a margin of just 115 votes. This represented a giant crash for Trump from his 53-42 performance in 2016, but it still wasn’t enough for Democrats looking to unseat Republican Rep. Ann Wagner. Like a number of Republican House candidates running in ancestrally red suburban seats, Wagner ran well ahead of the top of the ticket and defeated Democrat Jill Schupp 52-46.

This extremely narrow victory is the tightest presidential result we’ve found for all of the 404 congressional districts we’ve released 2020 data for so far, and we’d be very surprised if it gets displaced when we wrap up our remaining three states (Alabama, Louisiana, and Pennsylvania). The second-closest seat in last year’s elections was Iowa’s 3rd, which Trump claimed 49.15-49.02, a gap of 567 votes. Four years ago, the most competitive seat was Oregon’s 4th, which Hillary Clinton edged out Trump by 554 votes, or 46.14-46.0. (Joe Biden took it 51-47 this time.)

As it happens, our preliminary calculations suggested that Biden had won Missouri’s 2nd, but the closeness of the results sent us on a rigorous hunt for more accurate data that even involved researching election system software manuals to determine whether such data might be available at all. Fortunately, it was.

In St. Louis County, which makes up about three-quarters of the district, official election returns assigned every vote to a precinct, and no precincts were split between districts. We could therefore be certain that we could correctly assign every vote to its proper congressional district because we know which precincts belong to which districts.

However, official results from the other two counties in the district, Jefferson and St. Charles, only assigned Election Day votes to precincts. Absentee votes, which were almost a third of all votes cast in both counties, were only reported countywide in both cases.

In such situations when we have no other choice, we can use techniques to estimate how we should divvy up unassigned votes like these between districts, which is how we arrived at those extremely tight preliminary numbers that showed Biden just ahead. But we couldn’t settle for an estimate in this case given the narrowness of the margin.

Thankfully, we learned that the software used in both counties was capable of producing reports that break down election results by congressional district—in other words, they could automatically execute the very task we almost always have to perform manually. After weeks of pursuit, and with the help of friendly local officials willing to work with us, we obtained these breakdowns for both Jefferson and St. Charles. We’re extremely glad we went the extra mile, because the final results differed from our initial estimate and ended in an extraordinarily narrow win for Trump.

We should note that even with these more accurate reports from Jefferson and St. Charles, about a dozen votes (mostly absentees) remain unassigned. But since Trump’s margin was more than 100 votes, we can say with certainty that he carried Missouri’s 2nd Congressional District—just barely.

Zooming out statewide, Trump won Missouri 57-41, which wasn’t much of a change from his 57-38 victory four years ago in what used to be a fiercely contested swing state. The Show Me State’s remaining House seats were also anything but competitive. Biden took Rep. Cori Bush’s 1st District in the city of St. Louis 80-18, while he carried fellow Democratic Rep. Emanuel Cleaver 5th District in Kansas City at the other end of the state 59-40.

Trump, meanwhile, won the other five GOP-held seats with more than 63% of the vote. Republicans will have their chance to protect Wagner, and possibly make life more complicated for Cleaver, though, as they’ll have complete control of the redistricting process.