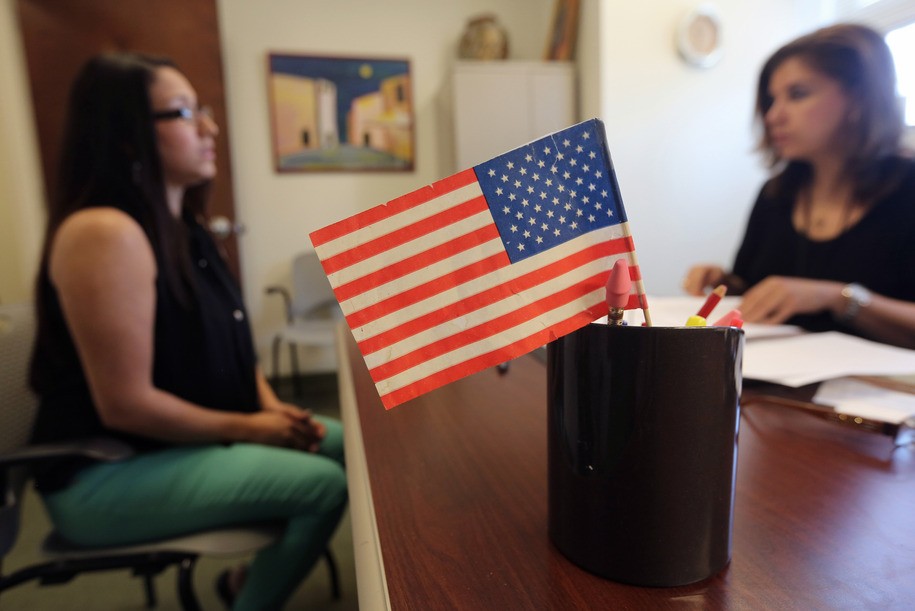 “Immigrant groups and attorneys claimed the changes were part of the Trump administration’s overall effort to restrict immigration and curtail the number of people able to gain citizenship,” BuzzFeed News reported. “Agency officials, however, said it was part of a process to update the questions to prepare immigrants to become US citizens.” One guess as to which explanation is more likely.

Initial reports on the previous administration’s changes said that U.S. Citizenship and Immigration Services (USCIS) doubled the number of civics questions that applicants were to be asked, from 10 to 20 out of a possible 100, meaning the passing score would tick up from six correct answers to 12. In other words, making it harder to pass. But other edits make absolutely clear the political nature of the changes, including one flat-out wrong question that had a direct link to the previous administration’s anti-immigrant agenda.

In one example cited by BuzzFeed News, “the answer to ‘Who does a U.S. senator represent?’ was altered from ‘all the people’ to ‘citizens of their state.’” But U.S. senators, like U.S. House members, represent everybody in their state! “This is not correct,” immigration policy expert Aaron Reichlin-Melnick said last year. “Members of Congress represent everyone who lives within their district, regardless of citizenship status. It’s been that way since the nation was founded.” Not according to the previous administration, which spent years trying to unconstitutionally erase undocumented immigrants from the U.S. Census, which is used to determine congressional apportionment.

Following a whistleblower report that top U.S. Census Bureau officials pressured staffers to rush a last-minute, “statistically indefensible” count on undocumented immigrants to turn over to the previous administration, director Steven Dillingham resigned with a year left in his term. “As President Biden begins his presidency, undoing the harm President Trump levied against the census should be at the top of the list, and I will be a ready and willing partner on those efforts,” New Hampshire U.S. Sen. Jeanne Shaheen said. And that needs to remain an important priority.

While BuzzFeed News reports that a USCIS spokesperson “had nothing ‘final’ to share at this time,” the plan is to reportedly return back to the 2008 version of the test. That test was put into place over a nearly decade-long period, with input from over 150 organizations, the report said. Migration Policy Institute policy analyst Sarah Pierce told BuzzFeed News that the process the previous administration went into in implementing its version of the quiz was, like many of its other policies, extremely questionable.

“The Trump administration’s revision lacked all of the transparency and wide input of that effort,” Pierce told BuzzFeed News. “Instead, they simply explained that they had received input from ‘experts in the field of adult education’ and that they tested it with an undisclosed number of volunteers during the summer of 2020.”

Right. Just like when the previous occupant of the Oval Office claimed in 2019 that 20 “mountain climbers” tested prototypes for his stupid border fencing. “We got climbers. We had 20 mountain climbers. That’s all they do—they love to climb mountains,” The Daily Beast reported at the time. The previous president’s claim was never proven, likely forgotten with whatever crime or scandal his corrupt administration was engaged in next.

“The incoming Biden administration could likely reverse the changes to the test or eliminate some of the more controversial questions,” Reichlin-Melnick continued last year. A reversal appears to be in the works, thankfully. “While changes to the citizenship test are periodically made (the last update was in 2008), these significant and politically motivated changes will do nothing but drive up backlogs and make the citizenship process unnecessarily more difficult.” And that was always the goal.