Cases of COVID-19 are down, and a blast of winter weather may be just what this pandemic needs 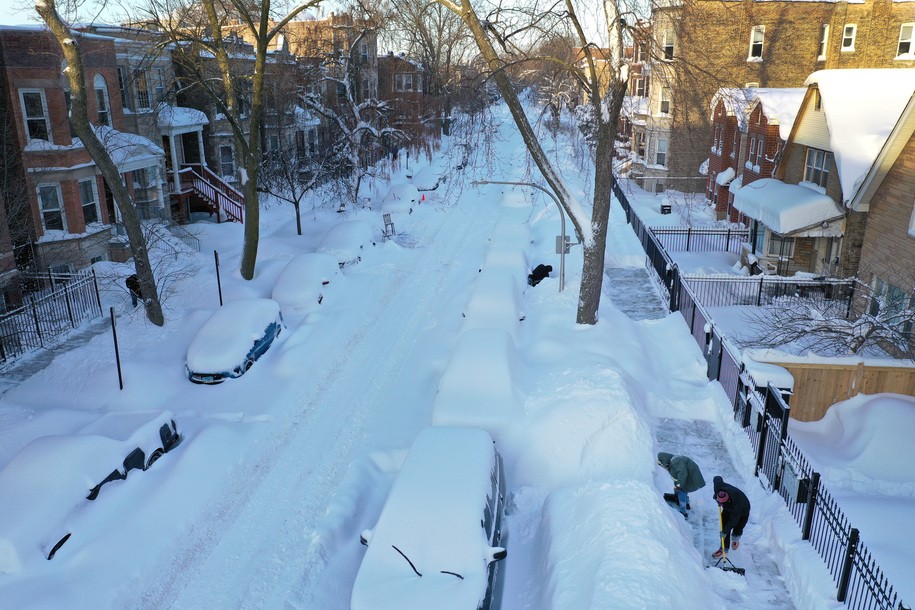 On Monday, the number of new cases of COVID-19 reported in the United States was under 55,000 for the first time since early October. And yes, those reports mostly come from Sunday, meaning that every Monday is usually the lowest day of the week, and this Monday was President’s Day, so numbers were down again because of reduced testing over the holiday, and weather conditions are so miserable there are undoubtedly Americans sitting at home with symptoms who can’t get a test because they can’t get to the testing station. Even so, the lowest number produced by the Christmas holidays was three times higher. So this is a good thing. An even better indicator is that the seven-day moving average has dropped below 90,000 cases for the first time since Nov. 3. The number of new cases is continuing to drop.

There may even be a good reason to be thankful for the miserable weather that many Americans are experiencing since some of the states currently shivering in the cold, buried under snow, or both are seeing some of the biggest drops. Cases in South Dakota have fallen from a peak of over 2,000 a day to just 61 reported on Monday—not because Kristi Noem finally decided to do something, anything, but because conditions in the state have been of the sort that definitely does not encouraging going out to socialize. If the holidays produced a “bump” in the cases (and they did), this national cold snap may just end up being what the nation needed to keep cases trending downward.

And it couldn’t have come at a better time, because it seems that new, more contagious variants  also appear to be more deadly.

The Governor of Texas is telling Texans to stay home because it is risky to go out. Let that sink in.

Right now, the center second of the United States is getting a general quarantine administered by that other fist of Mother Nature’s one-two punch: the weather. With slick roads, closed businesses and schools, and church services cancelled, the storm is doing what common sense and pleas from health experts could not. A few days of reduced spread in a limited area isn’t enough to put the whole pandemic on ice. But it doesn’t hurt.

When the B.1.1.7 variant became dominant in the U.K., the initial impression was that it was more contagious, but not necessarily more virulent. However, it turns out to be both. The best indications now are that the U.K. variant is 70% more likely to be transmitted, and as new research examined by the U.K.’s New and Emerging Respiratory Threats Advisory Group (NERVTAG) indicates, also 35-70% more deadly.

Note that this does not mean the mortality rate is 70% or anything close to that. It means compared to mortality rate of other strains of COVID-19, the rate of deaths from B.1.1.7 is higher. U.K. testing also indicated that the same higher rate applied to people getting more severe cases of COVID-19 and needing to be hospitalized. The B.1.1.7 variant is simply worse.

It’s still not clear if the same thing applies to other variants such as the B.1.1.135 variant that first became widely established in South Africa, or the P.1 variant from Brazil. These variants share some of the same genetic changes as B.1.1.7, but also have other changes that could make things better. Or worse. Still, the speed with which the variants have replaced older forms in the places of origin is a very good indicator that they’re winning on the more contagious front, which in this case is about all that counts.

There’s been an often repeated idea that the coronavirus will “weaken” over time. This is something that’s been seen with some other diseases, and there are viruses out there where keeping the host alive and pumping out virus over a prolonged period is a good strategy. That’s not how COVID-19 works. Spread of SARS-CoV-2 happens mostly in the period shortly after infection up until a few days after symptoms appear. So hitting hard and fast is a winning strategy for this virus. This could mean that more contagious and more virulent are a frequent pairing in coronavirus variants.

Vaccine levels trending upward, but still not as high as they should be

Cases are going down, the weather is putting a clamp on a lot of travel and socializing, and President Biden is pushing through both executive orders and a plan to finish the job of vaccinating the nation. So that’s good. When it comes to vaccinations, the Centers for Disease Control and Prevention’s (CDC) new vaccination dashboard shows that after several weeks of trending up, the holiday and the weather are both having an impact that has slowed the rollout. Last week, the number of new doses briefly exceeded 2 million per day. This week is running behind that level, but the seven-day moving average is still up to 1.5 million doses a day and climbing. And it does seem that more vaccine is getting out to the states, even if many are not effectively getting it that last inch into someone’s arm.

Testing levels are declining, and that’s a bad thing

While the COVID Tracking Project joined other sources in celebrating the decline of new COVID-19 cases, they also had some dire warnings that one of the most important things we can do to control the disease is actually getting worse: testing.

The decline in testing numbers has not been nearly as sharp as the fall in new cases, so it’s not as if the nation’s dropping case count is illusory. It’s also clear that hospitalization rates have eased greatly, so improvements are very real. Even the lagging indicator of deaths is trending downward, though at almost 2,500 a day, it’s still terribly high.

But the drop in testing numbers is coming at a time when both more variants are emerging and the government is putting new resources into conducting genetic testing and tracking these variants. Decreased testing is likely to mean not just that the overall case count is improperly reported, but that the CDC doesn’t have a good view of how variants are shaping the course of the pandemic.

Both the weather and holiday are contributing to a decline in tests, but there’s also another factor. With vaccine doses on the rise, and many areas experiencing a tremendous demand for vaccination, it’s placing a drain on human resources. Whether at a county health department or a pharmacy, it’s often the same people who administer tests or provide vaccine. This might be partially addressed using quick tests, but as The Wall Street Journal reports, many of those already purchased by the government are currently sitting around unused. The biggest problem seems to be that states have been given no guidance in how to work these tests into their overall testing strategy.

Too early to end mask mandates, but watch which mask you use

CDC Director Rochelle Walensky was on “Face the Nation” this weekend to complain that governors are removing mask mandates way too soon. Cases may be trending downward, but the virus doesn’t know that. It has no memory. It can and will exploit any opening. As quickly as cases have declined, they could go right back up if social distancing rules are discarded (see what happened in October and November for a past example).

But finding a good mask can be a challenge. As the Associated Press reports, hospitals are still stockpiling N95 masks after running into severe shortages earlier in the pandemic. And not all of those masks may be usable. Reports from last week showed that millions of masks that did not meet either K95 or KN95 standards have been distributed to healthcare workers. This has led to situations were healthcare workers have been forced to use inadequate “knock off” masks with a level of protection that is unknown.

Right now the total number of Americans who have died from COVID-19 sits at 482,536 on the CDC dashboard and 498,330 on WorldOMeters page that includes some deaths thought to be coronavirus-related but unconfirmed. Either way, the United States will all too soon hit that 500,000 line. So expect the media to start paying a little attention. Briefly.

And expect Fox News to suddenly wake up and say that Joe Biden killed half a million Americans.