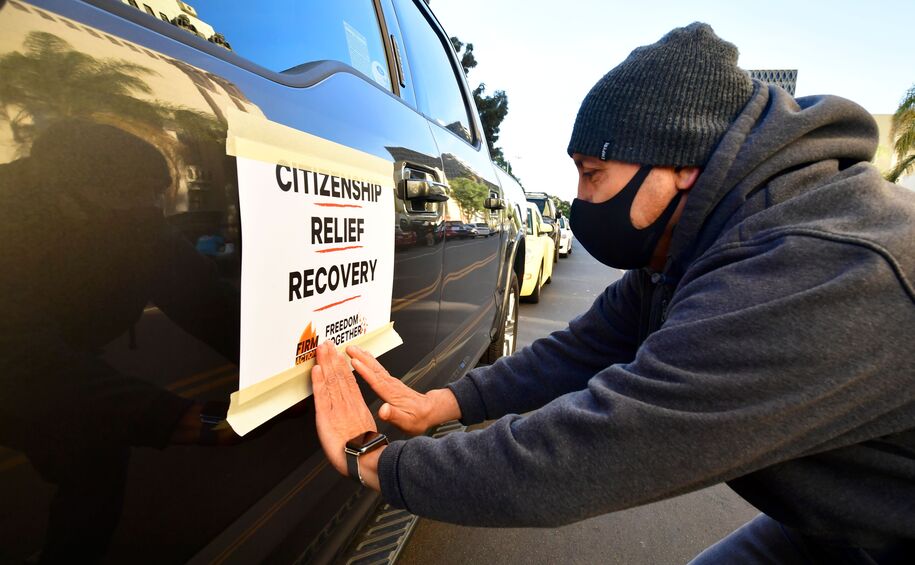 Dozens of economists from some of the foremost institutions and universities in the nation have added their names to a letter calling on the Biden administration to protect undocumented immigrants, including the millions serving as essential workers amid the novel coronavirus pandemic, as part of its recovery and jobs plan.

“Creating a path to citizenship for millions of aspiring Americans pays dividends not only for them and their families, but for our broader communities,” 60 economists and leaders tell the administration. “The COVID-19 pandemic has made plain how our public health and economic fates are inextricably tied together, and how harmful shortcomings in one part of our economy affect us all.”

“There are today an estimated 10.4 million undocumented immigrants in the country, 5 million of whom are working in essential occupations and industries,” the economists write. “Through their work they are keeping Americans healthy, safe, and provided for in the midst of the unprecedented COVID-19 pandemic—and they are doing so at great personal risk to themselves and their families.”

Nonprofit environmental journalism organization InsideClimate News reported last year that a study conducted by the California Institute for Rural Studies found “that farmworkers are contracting the virus at much higher rates than people in any other other occupation.” Nearly a quarter of a million undocumented immigrants, including close to 30,000 Deferred Action for Childhood Arrivals (DACA) recipients, are working in a health care provision roles, the Center for American Progress (CAP) said.

“Offering them the chance to earn citizenship will help to ensure that the economic recovery reaches all corners of society,” the economists continued, “including those that have disproportionately been on the frontlines of the pandemic and yet left out of prior relief bills, and establishes a more stable and equitable foundation on which future economic success can be built.” They cite further CAP research finding that creating a path to citizenship for undocumented immigrants would in fact be a financial boon for all people in the U.S.

“For instance, a 2013 study by the Center for American Progress found that providing legal status and a path to citizenship to 11 million undocumented immigrants would, over a ten-year period, generate a cumulative increase in GDP ranging from $832 billion to $1.4 trillion and a cumulative increase in the income of all Americans ranging from $470 billion to $741 billion,” they said. “Additionally, over that period, between 121,000 and 203,000 new jobs would be created each year and state and federal taxes paid by previously undocumented immigrants would increase by between $109 billion and $184 billion.”

“[C]onferring citizenship will bring expansive benefits to communities across the country, not only for the individuals directly affected, but for the larger systems—families, and the workforce—that they comprise,” the economists said.

The Biden administration, New Jersey Sen. Bob Menendez, and California Rep. Linda Sánchez are reportedly set to this week publicly unveil the immigration bill announced on his first day in office. Under Biden’s overhaul, undocumented immigrants who have already been registered with the government in programs like DACA and Temporary Protected Status, as well as farmworkers, would be able to apply for immediate relief. ”As a potential secondary path, lawmakers would work to pass bills legalizing farmworkers and Dreamers right away, and then move toward a more expansive overhaul,” NBC News reported. “The main objective, officials and advocates say, is progress.”

“We hope you will consider including this as a sensible and long overdue policy intervention that can help to ensure that the country’s economic recovery is as big and equitable as it needs to be to meet the challenges we face,” economists concluded in their letter to the Biden administration. Advocates are urging Biden to harness the new Democratic majority following historic electoral wins and take action to both ensure a meaningful economic recovery and finally create a path to citizenship that millions have been waiting and fighting for.

“A multi-racial majority voted out President Trump and his unrelenting cruelty towards, and denigration of, immigrants,” America’s Voice Director of Communications Douglas Rivlin said. “It’s past time to formally recognize what is already a reality: that immigrants are part of the American community, part of the American workforce, and part of our nationwide response to the economic and public health consequences of COVID-19. The American public strongly backs the idea of full legal status and citizenship for immigrants in poll after poll. It should not be difficult or controversial for Congress to translate this broad national support into a breakthrough achievement.”