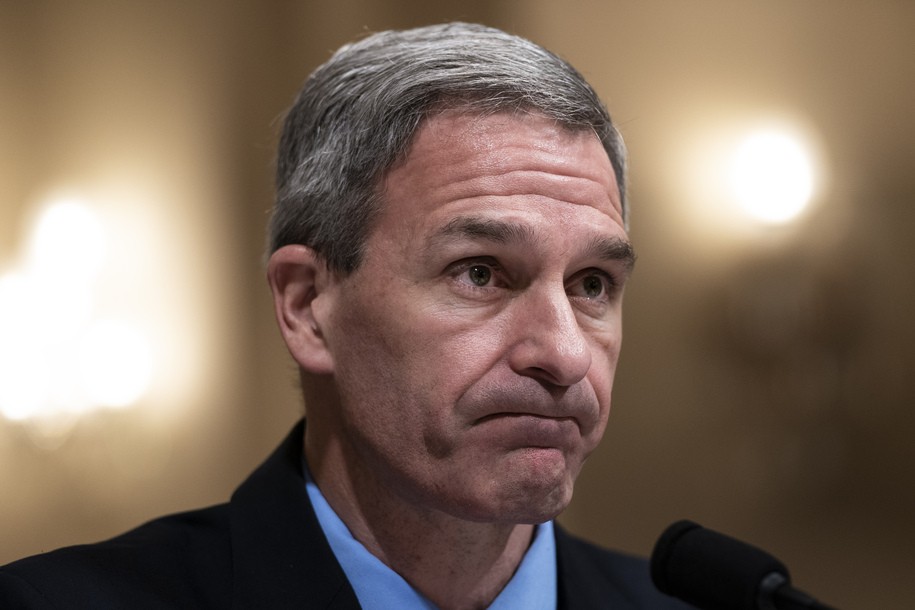 It was a bad day for unlawfully appointed former acting Department of Homeland Security (DHS) Deputy Ken Cuccinelli on Tuesday, and that’s always a good thing for immigrants. The Biden DHS that day rejected the highly questionable agreement the anti-immigrant loudmouth signed with the union representing Immigration and Customs Enforcement (ICE) agents, and that a whistleblower recently exposed as part of a complaint into Ken’s corrupt behavior.

That document, signed into place on the last full day of the previous president’s administration (nope, nothing sketchy going on there at all!), would have given the ICE union veto power over whatever changes and policies the new administration sought to implement. Or, all of them basically. Under law, the new administration had 30 days to “approve or disapprove” the agreement, BuzzFeed News reported. On Tuesday, with just hours left to spare until that deadline, it did the latter.

“As part of routine process and provided for by statute, the Department conducted a review of the terms of the agreement and determined that it was not negotiated in the interest of DHS and has been disapproved because it is not in accordance with applicable law,” a DHS spokesperson told CBS News. “DHS will make policy decisions in accordance with the law and based on what’s best for national security, public safety, and border security while upholding our nation’s values.”

United We Dream, a national organization led by young undocumented immigrants, celebrated the document’s rejection as “an organizing win” in a statement received by Daily Kos. United We Dream and Detention Watch Network had in recent days circulated a petition calling on DHS Secretary Alejandro Mayorkas to reject and cancel the agreement. Additionally, over 100 groups, including Daily Kos, had signed onto a letter urging Mayorkas to act as soon as possible.

“According to the whistleblower complaint, the Secretary has the right to dismiss the agreements, but must do so within 30 days of the date of the agreements, which would be on or before February 18, 2021,” the letter said. “In the event of no dismissal, the agreements will take effect. The politically motivated, unlawful, last-minute agreements of the prior administration must not dictate the future of these federal agencies or further insulate them from oversight and accountability in the Biden administration.

“The new administration must be able to implement its own priorities and undo nearly two decades of these agencies’ harmful and destructive actions by creating new policies that treat immigrants with dignity and provide a fair process,” the letter continued.

But even though the Biden administration has rejected Ken’s document, this may not be the end of the road for it exactly. “The move on Tuesday sets the stage for a possible showdown between President Joe Biden and ICE’s union, which endorsed former president Donald Trump in 2016 and 2020,” BuzzFeed News said. In initially reporting on the document, The New York Times reported “the agreements signed by Mr. Cuccinelli suggest that the union could appeal any such rejection to the Federal Labor Relations Authority.”

It’s unclear where ICE’s union—which endorsed the previous president in 2016 in what was its first presidential endorsement—stands at the moment. If the union does fight it, the Biden administration needs to fight back. It shouldn’t even be a question. It was both ridiculous and infuriating that someone as mediocre and unqualified as Ken Cuccinelli got to implement national policy in the first place—and he certainly shouldn’t get to do it even after he’s out of the office he unlawfully occupied.

The whistleblower who exposed Ken’s document had also accused the unlawfully appointed former official of “gross mismanagement, gross waste of government funds and abuse of authority,” the Times had reported. David Z. Seide, the attorney representing the whistleblower, further said the employee “possesses information concerning significant acts of misconduct” by Cuccinelli. CBS News said that the Office of the Special Counsel has reportedly opened an investigation into the complaint.