Texas is demonstrating a massive failure of GOP core policies, and they’re lying about it. Bigly 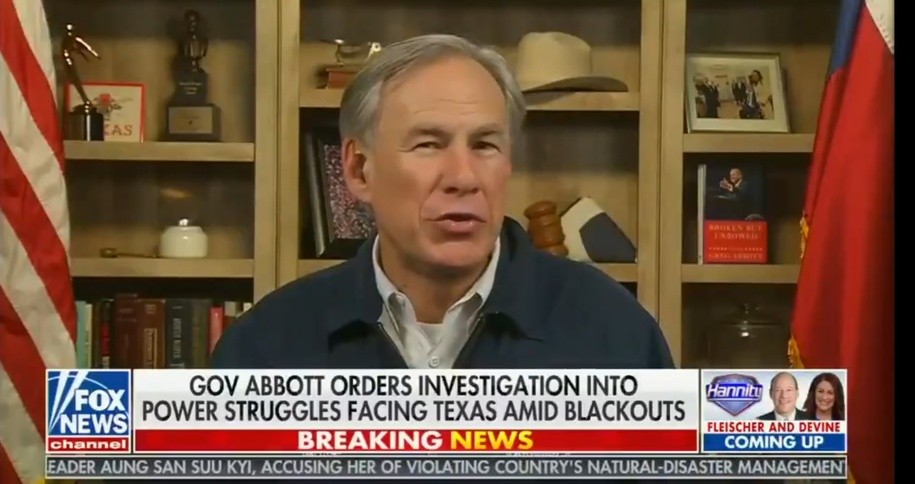 Perhaps it’s appropriate that on the day when everyone can say something good about Rush Limbaugh, Republicans are again working hard to push a big lie. As has been seen so many times in  Donald Trump era of Republicanism, the big lie is best deployed in an attempt to mask abject defeat with a false patina of victory. And, as has been the rule since the time of Joseph Goebbels, one of the most important features of selling that lie is repetition.

With Texas in a deep freeze—a deep freeze that lacks power and water—Republicans who lead the state desperately need an excuse for why they’ve failed their citizens to the extent that millions are cold and many of their lives are in genuine peril. The explanation the Republicans have created is exactly as truthful as the idea that the assault on the nation’s Capitol was directed by antifa.

And they’re doing it for exactly the same reason: The failure of the Texas power grid is a prime example of a massive failure not just on the part of Republican leadership in Texas, but of the whole conservative philosophy. This is a system that was milk-fed on their conception of free market capitalism and raised to generate maximum profits for a few at the expense of the many. In the face of 40+ years of refining that system down to the raw ragged edge where any pressure could not help but generate failure, they’re not just lying about the cause, they’re trying to weaponize their own failure in order to make things worse.

In case there’s still some confusion that the issue of power failures in Texas has to do with windmills: It’s not. It’s really, really not. The cause for the Texas blackout comes from decades of a system that was meant to optimize profits by encouraging providers not to plan for emergencies or provide any more power than is needed under usual circumstances. That system depends on tight spots in the market to generate spikes in pricing. It’s supposed to operate by generating “inconvenience.”

Here’s The New York Times providing some insight on the thinking of those involved.

That design relies on basic economics: When electricity demand increases, so too does the price for power. The higher prices force consumers to reduce energy use to prevent cascading failures of power plants that could leave the entire state in the dark, while encouraging power plants to generate more electricity.

It’s “necessary” not because that provides the best service to the most customers, or because that ensures the greatest level of safety in the case of emergency. It’s necessary because that’s the best way to generate maximum profits from the system at a cost of “inconvenience” to those left in the dark.

But while a professor of global energy policy at Harvard’s Kennedy School can afford to be honest about how the Texas system is working exactly as designed, the Republican politicians who put this system in place—along with conservatives nationwide who would like to use this as a model for every system everywhere—don’t want the public looking too closely at how this sausage is being not made. That’s why they’ve launched a national “Look, over there!” campaign to point the finger at wind energy. Even though that energy is the one component of the system that’s actually working better than expected. Solar power is running slightly below projections, but only by a small amount.

The big windy lie campaign began on Monday morning, with Fox Business journalist Steve Moore touting oil stocks and introducing the framing that other Republicans would take up for the remainder of the week.

The other thing that’s going on … is that wind and solar are almost completely useless when you have a polar vortex, when you have these frigid temperatures. The wind turbines freeze, they don’t twist anymore, and the solar panels get snow and get ice on them so they’re no good either.

Moore then goes on to claim that America is using coal “at record levels across the country.” Which, unless he means at record low levels, is a whopper of lie. America has not used so little coal since 1979. It also ignores the fact that a larger percentage of the outage in Texas comes from coal plants that are offline than comes from wind turbines out of service. Far from turning to coal in this crisis, the crisis has again demonstrated that coal is less reliable than renewable sources. Not only that, it’s far more costly. Which is why no one is even talking about building a new coal plant.

But the lie that wind turbines were freezing was quickly picked up and repeated across the spectrum of Fox News programs. This would certainly be news to the people who run the largest wind farm in Antarctica, or in fact to every other state where wind farms operate. Iowa is genuinely the nation’s leader when it comes to the percentage of power that it gets from wind. Iowa is also regularly subject to the kind of weather that caused Texas’ power grid to buckle this week. Iowa’s wind power is just fine.

After a hundred more repetitions, and once the meme was solidly established on Facebook and other social media, Tucker Carlson was the logical person to turn the big lie big dial up to 11 when he put the blame for the continuing Texas’ blackout solidly on … the Green New Deal, a piece of legislation yet to move out of the House and Senate. That, in turn, led to a full day of right-wing talkers popping up to call the Green New Deal “deadly” and to point to Texas as “proof” that renewable power doesn’t work.

With this solid bench of two days worth of lies to rest on, Texas Gov. Greg Abbott then appeared with Sean Hannity to reinforce every false claim made so far.

This shows how the Green New Deal would be a deadly deal for the United States of America. … Our wind and our solar got shut down, and collectively they were more than 10% of our power grid. … As a result, it just shows, that fossil fuels is necessary for the state of Texas, as well as the other states.

Meanwhile in the real world, the actual production of wind power was actually producing 2 gigawatts more than the most optimistic forecast, while natural gas prices were soaring to record highs, specifically because gas pipelines in Texas were freezing up and natural gas suppliers were unable to meet demand. Gas prices went from $4/MMBtu at the beginning of last week to $9 at the end of the week. On Tuesday, they hit $1,000. On Wednesday, $1,200. That’s a major part of why electricity in Texas is currently pegged at the ERCOT maximum of $9,000 megawatts an hour across the entire state.

In fact, the only thing in the nation currently thrilling coal mining companies is the instability in the gas market introduced not by Texas’ dependence on wind, but by its failure to require that gas pipelines be buried or insulated to guard against freezing. (Side note: Methane does not freeze above -161 degrees C. While it’s cold in Texas, it’s not that cold. What’s freezing in the pipelines is actually “drilling fluids” resulting from the use of fracking to expand gas production in Texas’ Permian Basin.) What could make companies think twice about closing their money-losing coal plants? A gas market more unstable than at any time in the last two decades.

As Bloomberg reports, out of service wind turbines are the least contributing factor to the Texas outages. Even if all the wind turbines currently offline, including those down for regular maintenance, are added together, their capacity comes to just 3.6 to 4.5 gigawatts, or about 12% of the total 35-gigawatt shortfall in Texas. And that’s even if those wind turbines were producing at their maximum level, not the level they’re actually rated to in current conditions. The truth is wind turbine outages are well below 10% of the total outage.

Wind shutdowns accounted for 3.6 to 4.5 gigawatts — or less than 13% — of the 30 to 35 gigawatts of total outages, according to Woodfin. That’s in part because wind only comprises 25% of the state’s energy mix this time of year.

Texas has failed because it has built a system that’s designed to always run at the edge of failure. That system offers absolutely no incentive to increase reliability or provide protections in the case of an emergency situation. It’s a system where the providers get maximum money when the system includes periods of failure and excess demand, creating a perverse incentive to not expand so that the system has any buffer between capacity and demand.

What Abbott and every Fox News talking head is trying to do is make Texas more dependent on the part of the system that has failed the hardest and is most responsible for spiking prices. Only … they’re not really. Because neither Fox nor Abbott is actually proposing anything at all. They’re just repeating the latest Big Lie over and over, with full knowledge that it is a lie and that it makes absolutely no sense.

But it does allow them to point the finger of blame away from their core beliefs in a maximized profit market and deregulation of ways to fleece the public.