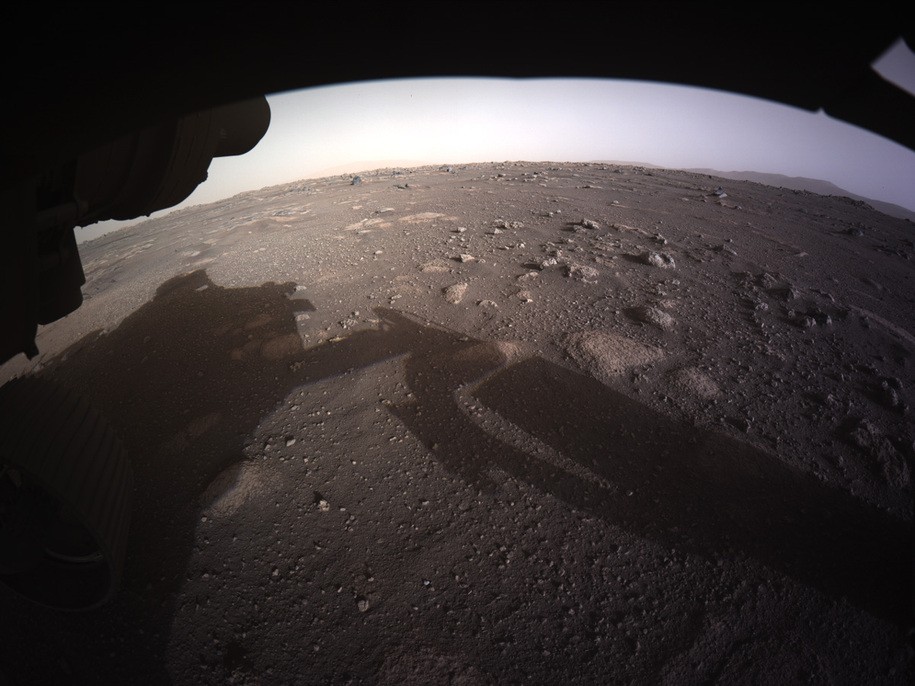 Hello. Remember Science Round-up? It’s understandable if the answer is “no.” That’s because Science Round-up is something that we used to do on Saturdays in the days before the pandemic, and before every single day of the week was filled with outrageous false statements designed to crack America open at the seams and pour in acid. So … 10,000 years ago? Something like that.

In any case, the intention is to look at some stories that have popped up over the last couple of weeks which might have easily been missed in the shuffle, as well as to revisit the topics of past reports to fill in new details. Or, in this case at least, you can think of it as the “hey, if I call it science round-up, then I can talk about someone cloning a ferret from 30-year-old cells taken from a freezer as well as some recent news on COVID-19 vaccines.” It’s an all-purpose geek out thread. Feel free to bring your own stories.

In any case … welcome back to Science Round-up! We’re going to Mars, checking in for super-cute pictures of that ferocious ferret-sicle, and also getting a vaccine update. All in one big mash up.

On Thursday, scientists at NASA (and space nerds everywhere) held their breath as everyone waited for news from Mars. In “seven minutes of terror,” the Mars Perseverance rover plunged into the Martian atmosphere at 12,000 mph. It went screaming along in a plume of plasma, dropped its heat shield, deployed a parachute, dropped the parachute, shed its aeroshell, ignited a “jet pack,” lowered the rover to the ground using a series of ropes and and a “sky crane,” then detached the jet pack and set it safely away to crash in the distance. And all of that had to happen automatically, since with an 11-minute time lag in signals getting back from the red planet (darn you, speed of light), it was actually all over before NASA even got the news that landing had begun.

On Friday, NASA held a press conference to demonstrate that everyone at both Houston and JPL was actually still breathing. They used that occasion to show off this tantalizing tidbit that has made its way back from Perseverance.

That image is looking down on the top of Perseverance as it hangs two meters above the Martial soil. It’s a unique perspective, but that’s not what makes this image really exciting. What’s especially neat is that this is actually a single frame from a video that will show the complete landing from the time the heat shield is disposed until wheels hit the dirt. That video is yet to be released. However, NASA has already lined up a live stream to be held at 2PM ET on Monday. Expect to see the world premiere of Perseverance landing video, as well as first shots from the newly raised Mast Cam at that time.

In the meantime, NASA has released one more shot. This is actually another picture from one of the “exploration cameras,” which are also known as the hazard-avoidance cameras. They’re the low-set cameras that look ahead and behind Perseverance to help identify obstacles to travel around. Some pics from these cameras were released shortly after landing, but at that time, the exploration cameras were still covered over by transparent covers that protected them from sand kicked up during the landing. So those first pictures were a bit blurry and limited. The new shot (see top of article) shows that even the exploration cameras can deliver a pretty sharp image.

The mast camera is actually getting raised on Saturday, so don’t be surprised if NASA releases a few images to show how things are going.

The Black-Footed Ferret is undoubtedly the cutest little prairie dog murder machine on the planet. It’s also endangered. In large part, that’s because people have trapped it, poisoned it, brought in dogs and cats that kill it, and disrupted the huge amounts of space that even a tiny predator needs to survive.

It’s also because of plague. Yes, that plague, Yersinia pestis, lovingly known as that thing that killed a significant portion of the human race on multiple occasions. The Black Death. Not only can the ferrets catch the disease themselves, but it can be endemic in prairie dog colonies, where it sometimes breaks out into a town-emptying mini-epidemic. So they can get it from the thing they eat, or the thing they eat can just disappear. Both results are bad for ferrets.

The Black-footed Ferret was one of the first animals to make it onto the U.S. Endangered Species List back in 1967. For a period in the previous century, the species was thought to be extinct in the wild. Then one turned up (dead) thanks to a farm dog, leading scientists to look a more closely at areas that were thought to be outside its traditional range. At the time, that remaining colony numbered just 18, but thanks to a dedicated program of captive breeding, there are now thought to be around 600 out there leading their fierce little lives, with another 250 surviving in captivity. It’s still critically endangered, but that beats the holy heck out of extinct.

On Thursday, National Geographic reported that there’s one more Black-Footed ferret in the world, only this one is a little different. Or actually, this one is not different at all from a ferret that died 30 years ago. That’s because cells from that 20th century ferret, stored in a deep freezer, have been used to create a new clone animal. It’s sort of like the plot of Futurama. Only with ferrets.

The cloning, which was carried out by a company called ViaGen, which also offers to clone pet dogs and cats (for a significant price—replacing your buddy Fido runs up a $50K tab). it took cells that had been stored at San Diego’s Frozen Zoo, extracted the DNA, and placed it in eggs from a still-around female ferret. Then those eggs were implanted and “Elizabeth Ann” was born.

Why? Well, just look at that face!

More seriously, the problem comes back to that issue of all the Black-footed ferrets around today being from a handful of survivors at a single colony in Wyoming. That means that they—like cheetahs and several other animals—have very low genetic diversity. So adding even the contributions of a single individual can be important to the species health. Elizabeth Ann’s clone-mom, Willa, has no living descendants. Now Elizbeth Ann can give those genes a second chance.

Naturally, this generates questions about how close we are to having Mr. DNA show us around Jurassic Park. The responsible scientific answer to this is “no, this will not lead to dinosaurs eating your face.” However, Viagen also recently produced a clone of an endangered Przewalski’s Horse and they’ve been working for years with teams looking to clone a Wooly Mammoth. So while there doesn’t seem to be a raptor in the immediate future, maybe you can get them to whip up a saber-tooth cat. For the right price.

And speaking of Wooly Mammoths

As Viagen was engaged in ferret-resurrection, Scientific American reported on some other genes making the trip from a much more distant past. Samples extracted from three mammoth teeth have produced the oldest DNA sequences ever produced — including one that’s over a million years old and belongs to a subspecies of mammoth we didn’t even know existed.

The findings, from the Center for Paleogenetics in Stockholm, Sweden, demonstrate that while the public tends to think that “wooly” is the only kind of mammoth out there, these elephant relatives actually existed in several different forms. One of the teeth, from about 700,000 years ago, was identified as Wooly mammoth (Mammuthus primigenius) though it appears to be an early form, based on the shape of the tooth. Another tooth came from the closely related Steppe mammoth (Mammuthus trogontherii), a species once common in Asia and Europe. The third tooth turned out to be something of a mystery, but on close review it may be from a previously unknown species of mammoth that was the predecessor of the enormous Columbian mammoth that evolved in North America. This whole lineage may actually represent a hybridization between the Steppe mammoth and the Wooly mammoth.

At a genetic level, it also turns out that all of the mammoth DNA seemed to have the same sequences that gave the Wooly mammoth its wool. So all these relatively hairless paintings of Steppe mammoths and Columbian mammoths need to come in for a fur coat.

The DNA found in these teeth was far from intact, but thanks to new sequencing techniques and the ever advancing oomph of computing power, the teams were able to develop apparently complete sequences by assembling millions of fragments. There is clearly a lot of information in the three-billion+ base pairs of these mammoth genetic signatures, but reading them is going to take a lot longer than it took to decode them.

Vaccine: A single shot will do you … but take two

On Friday, the British medical journal Lancet published a letter from scientists in Israel evaluating the effectiveness of getting just a single shot of Pfizer’s COVID-19 vaccine. An earlier study had indicated that the vaccine had an efficacy of 52.4% after the first dose, and 90.5% after the second dose. However, that study included some cases that occurred in the first few days after dose one—an issue that also appeared in Pfizer’s own data presented to the FDA.

Of the 81 cases they had of vaccinated people coming down with COVID-19, 55 happened among people who were still within two weeks of that first jab. Eliminating that group, and looking at just those cases that come more than 15 days after the first shot, the efficiency of a single jab rose to 85% when it came to preventing symptomatic cases (75% improvement in preventing both symptomatic and asymptomatic cases). In some ways, this appears to be similar to the data from Johnson & Johnson, who showed a rising curve of immunity for their vaccine that reached nearly 100% effectiveness after 45 days.

In any case, the FDA is not changing its recommendations and is still pushing patients to get that second shot. This is a good idea, because the elevated levels of immune reaction generated by the second jab may be critical in providing the boosted immunity necessary to overcome the toughest variants that are circulating.

Still, the possibility of using a single shot is fantastic news and it can be expected to stretch vaccine supplies in many areas. On top of this, Pfizer has gone back to the FDA with evidence that their vaccine can better hold up to being being stored at normal freezer temperatures for extended periods. This should greatly reduce the need for extremely specialized deep-freeze storage—especially during this period when vaccine demand is so high—and may mean that some vaccine that might have been put down as spoiled is still just fine. Distribution of the vaccine is getting easier as the supply is getting better and the means of utilizing it is getting more flexible. Good, good, and good.

And next Thursday, the FDA panel is slated to meet on the Emergency Use Authorization request for Johnson & Johnson’s single-shot vaccine. So tune in for exciting live coverage of epidemiologists, medical statisticians, pediatricians, and others asking probing questions of Johnson & Johnson’s team. If all goes along the same schedule as the last two vaccines, by this time next week, a third vaccine may be on its way to American arms.

NASA Scientists & Engineers successfully landed a rover & helicopter on planet Mars, where it’s 100 degrees below zero, 120 million miles away. On that same day it was cold in Texas. Millions of people lost electricity. Conclusion: Maybe NASA, not politicians, should run Texas. pic.twitter.com/YzioIXBiij