A whole series: Black voters showed up for Biden. Now it’s his turn to show up for us 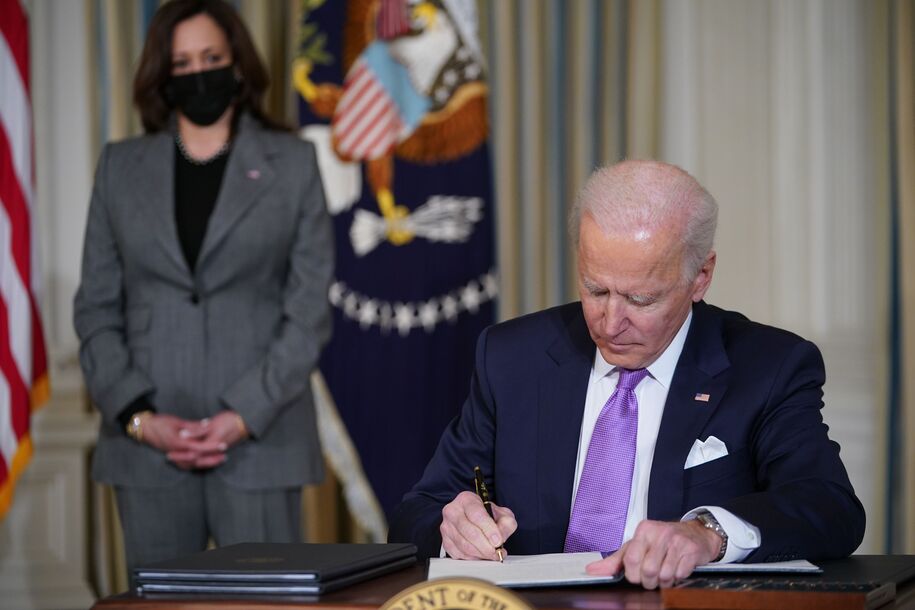 It’s not exactly lost on President Joe Biden—former vice president to the country’s first Black president, Barack Obama—how impactful the Black community has been in his political career. Even before 91% of Black women and 80% of Black men voted for Biden to become president, Black Delaware voters helped cement his start and continuity in politics. He remained a senator from 1973 to 2009. “They’re the ones that as the saying goes ‘brought me to the dance,’” Biden told MSNBC’s Joy Reid last July. “I have been loyal. They have been loyal to me.”

Whether that shared loyalty will continue throughout Biden’s presidency remains to be seen. We’re keeping track of the promises made to Black voters along the way, and how the commander-in-chief is fulfilling those promises. To start, we’ve extracted more than 100 promises he and his team have made to the Black community from Biden’s “Lift Every Voice: The Biden Plan for Black America.”

In the plan released last May, they said Biden was running “to rebuild our economy in a way that finally brings everyone along—and that starts by rooting out systemic racism from our laws, our policies, our institutions, and our hearts.” Biden’s team laid out eight general areas it would be focusing on to accomplish these goals: economic mobility, employment inequity and pay disparity, the education gap, COVID-19 inequities, healthcare disparities, criminal justice reform, voting rights, and environmental injustice. While some parts of the list would depend largely on how Congress votes, the president could—and in some cases already has—fulfilled some of the promises through executive orders and directives his first month in office.

Biden’s promises: Create a task force to address the racial disparities that have been laid bare by the coronavirus pandemic and establish health standards for workplaces.

Biden’s actions: He signed a set of executive orders to expand COVID-19 guidance on workplace safety, establish a pandemic testing board, and create a health equity task force to recommend ways to address data shortfalls and inequities in COVID-19 response.

One of the orders requires federal employees and those in federal buildings to wear masks. Another order seeks to improve the capacity of the nation’s healthcare systems with recommendations to states and healthcare providers, and another order directs the secretary of education to provide “evidence-based guidance” on how to safely reopen schools if at all.

Biden’s actions: He signed an executive order on Jan. 28 to direct the health secretary to consider a special enrollment period for the uninsured and under-insured and review policies for opportunities to amend them in light of the pandemic.

Biden’s promise: He promised to “end the federal government’s use of private prisons.”

Biden’s actions: The president signed an executive order on Jan. 26 instructing the attorney general not to renew “Department of Justice contracts with privately operated criminal detention facilities.” Biden stated in the order: “More than two million people are currently incarcerated in the United States, including a disproportionate number of people of color. There is broad consensus that our current system of mass incarceration imposes significant costs and hardships on our society and communities and does not make us safer. To decrease incarceration levels, we must reduce profit-based incentives to incarcerate by phasing out the Federal Government’s reliance on privately operated criminal detention facilities.”

Biden’s actions: He signed an executive order on Jan. 20 to use the White House Domestic Policy Council to “embed equity principles, policies, and approaches across the Federal Government.” The order lays out an interagency process to identify ways to assess equity, conduct an equity assessment in federal agencies, allocate federal resources to equally invest in underserved communities, and revoke an executive order of former President Donald Trump to turn a blind eye to racism in the federal government.

Biden instead wrote: “By advancing equity across the Federal Government, we can create opportunities for the improvement of communities that have been historically underserved, which benefits everyone.”

To that end, he also signed an executive order on Jan. 25 to allow “All Americans who are qualified to serve in the Armed Forces” to do so, reversing a Trump-era ban on transgender people in the U.S. armed forces.

Biden’s actions: While robbed of a chance to nominate a Supreme Court justice, Biden has taken several other opportunities to appoint Black people to his Cabinet and administration. Most notable is Vice President Kamala Harris, the first Black and Asian American second in command to the president. Biden has also nominated retired Gen. Lloyd Austin as the nation’s first Black defense secretary, Linda Thomas-Greenfield for ambassador to the United Nations, and Cecilia Rouse as the first Black woman to head the Council of Economic Advisers. Biden’s pick of Marcia Fudge as the nation’s first female housing and urban development secretary in 40 years didn’t come without criticism, many considering the congresswoman who serves on the House Agriculture Committee a better pick for agriculture secretary.

“As this country becomes more and more diverse, we’re going to have to stop looking at only certain agencies as those that people like me fit in,” she told Politico last November. “You know, it’s always ‘We want to put the Black person in Labor or HUD.’” When given the opportunity to serve, however, Fudge happily took it.

Her nomination was hardly the sole criticism of Biden’s Cabinet picks.

Biden’s action: Biden nominated Merrick Garland, Obama’s blocked nominee for the Supreme Court, for attorney general. And although the nomination came with a touch of disappointment that a Black person with experience in criminal justice reform and civil rights hadn’t been tapped for the position, it’s just a touch because the moderate judge has pledged to prioritize going after white supremacists and other extremists.

Garland: “We do not yet have equal justice. Communities of color and other minorities still face discrimination in housing, in education, in employment and in the criminal justice system. And they bear the brunt of the harm caused by a pandemic, pollution and climate change.” pic.twitter.com/w3bYBDXLRM

“Communities of color and other minorities still face discrimination in housing, education, employment, and the criminal justice system; and bear the brunt of the harm caused by pandemic, pollution, and climate change,” he said in prepared remarks for his Senate confirmation hearing on Monday. “150 years after the Department’s founding, battling extremist attacks on our democratic institutions also remains central to its mission.”

The NAACP tweeted on Monday that “today, a new chapter begins” for Garland. A new chapter indeed.

Two years ago, @DerrickNAACP testified against William Barr’s nomination for Attorney General. Today, a new chapter begins w/hearing for Merrick Garland. As AG, Garland must ensure DOJ is centered around civil rights. Together, we must restore & advance #civilrights. pic.twitter.com/KB0r2dOKYH

Sen. Jon Ossoff asked Garland during his confirmation hearing on Monday about accountability for local agencies, citing allegations of prosecutorial misconduct in the case of Ahmaud Arbery. Arbery, a Black man, was jogging in South Georgia when he was accused of trespassing, shot, and killed on camera on Feb. 23, 2020, “but local authorities chose to look the other way,” Ossoff said.

We thank Senator @ossoff for acknowledging tomorrow’s anniversary of the murder of Ahmaud Arbery in Georgia – and we appreciate Judge Garland’s response to his question about Congress equipping the DOJ’s Civil Rights Division to launch pattern or practice investigations. Watch: pic.twitter.com/i2Z4wIvExt

The Georgia senator asked how can Congress equip the Department of Justice’s Civil Rights Division to launch more effective “pattern or practice investigations” into allegations of civil rights violations. The Trump administration launched one.  “What I will say is that like many, many Americans I was shocked by what I saw, videos of Black Americans being killed over this last summer,” Garland said. What it created was an opportunity “to make dramatic changes and really bring forth equal justice under the law,” Garland added.

Many of the Black voters who backed Biden’s bid for the presidency are looking for him to do exactly that. It remains to be seen whether the president’s commitment to criminal justice reform will extend beyond his initial directives and nominations, but ending federal reliance on private prisons and appointing an attorney general who prioritizes civil rights violations constitute a fair start in my book.

Stay tuned for more as we continue tracking how Biden delivers on his promises to Black America.

RELATED: Garland: January 6 ‘the most heinous attack on the Democratic processes that I have ever seen’