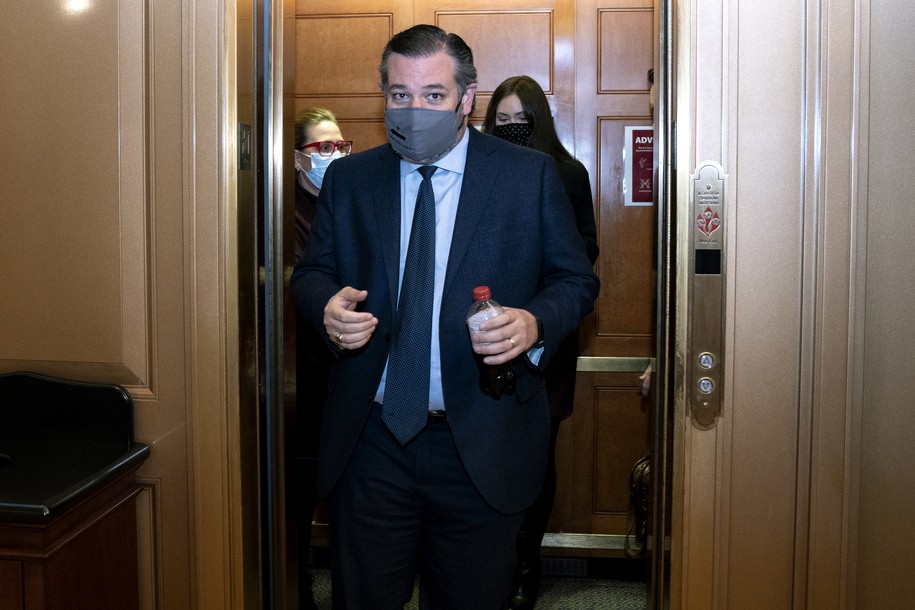 The reason that Heidi Cruz’s texts became news was not because Heidi Cruz did something wrong. The reason that Heidi Cruz’s texts became news was because her husband, Texas Sen. Ted Cruz, attempted to blame his kids for his bad decision-making. Cruz’s very elitist and irresponsible decision to take a vacation to Cancún, Mexico, while millions of people in his state were freezing and without power due in no small part to the “free market,” no-regulation policies that he has championed while in office, is solely his own. His wife’s texts show that the decision to leave Texas for warmer weather is due to the fact that Ted Cruz and his family are wealthy and do not care about Ted Cruz’s job. Ted Cruz knows this. That’s why Ted Cruz tried to slither back into the country and pretend he was just acting as an expensive chaperone for his kids … and his adult wife.

Since then, Sen. Cruz has been doing all kinds of damage control, usually to chants of “resign” and numerous online petitions calling for Cruz to leave his privatized version of public life. On Tuesday Cruz did an interview where he used bad words to give the impression that he’s righteously indignant and angry about being called out as the corrupt elitist sociopath that he is. It’s the same righteous anger he showed shortly after Donald Trump called him the Zodiac Killer, said his father colluded in the assassination of John F. Kennedy, and that his wife, Heidi, was ugly. And just like that previous “anger,” today’s fury is all performative and for show. He’s a good little doggy to whatever person pulls his strings and promises to keep him afloat in power.

On Tuesday, during former U.S. Capitol Police Chief Steven Sund’s opening statement in front of a Senate Homeland Security and Governmental Affairs Senate Rules and Administration joint hearing on Capitol Hill, Cruz was seen playing with his smart phone. He looked like he was typing on that phone. Maybe even texting his family to ask for pictures of the warm Mexican weather?

Sen. Ted Cruz (R-TX) is on his phone while Former Metropolitan PD Chief of Police Steven Sund testifies about violence at the January 6 Capitol insurrection. pic.twitter.com/vXR1odKmFX

You only have 12 months to use the airline credit. Better to book now so you don’t forget. https://t.co/hnyuwMIcwR

Considering how overwrought Cruz’s attempts at damage control optics have been, this move is particularly galling.

CNN cuts to Ted Cruz texting while the former Capitol Police chief talks about his worst day on the job pic.twitter.com/wRitETzbUj

While we are at it:

Ted Cruz, distracted by his phone during this Senate hearing on the deadly January 6th riot, should be REMOVED FROM THE HEARING. Remove him from Congress while you’re at it. pic.twitter.com/OCypNIoDnf

But in the end, this is the overwhelming feeling about corrupt officials like Ted Cruz.

Ted Cruz texting rather than listening to what the former head of the Capitol police has to say about the attack on the Capitol. We all know he doesn’t care. His hate speech participated in the attack. Why they allow people like Cruz and Hawley on these panels is beyond me.