‘Does not advance the interests of the United States’: Biden ends previous admin’s green card ban 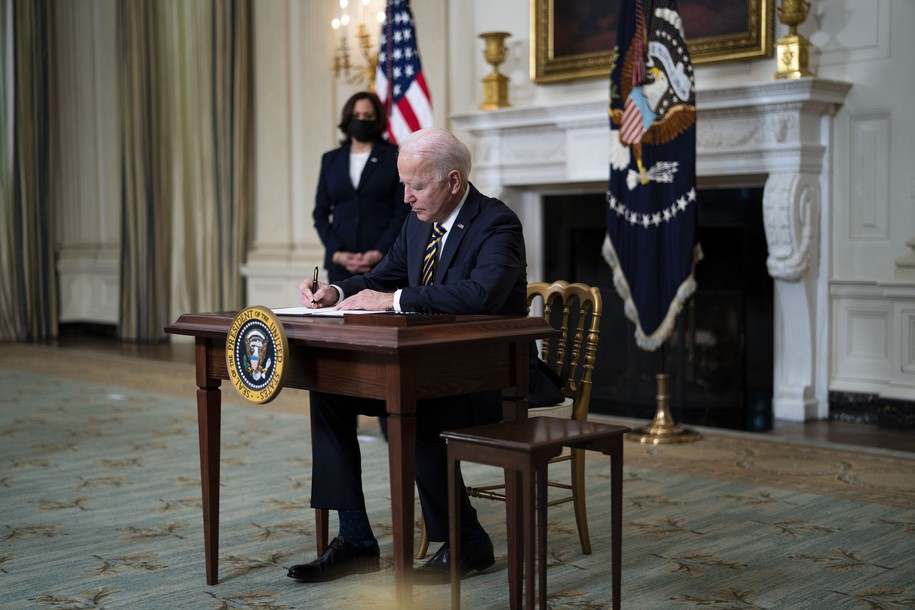 President Joe Biden on Wednesday revoked the previous president’s green card ban, saying in a proclamation that the previous administration’s ban on certain visas did “not advance the interests of the United States. To the contrary, it harms the United States, including by preventing certain family members of United States citizens and lawful permanent residents from joining their families here.”

The previous administration had long sought to wall off legal immigration entirely, and cynically found its excuse to try to do just that in the novel coronavirus pandemic. Texas Rep. Joaquin Castro nailed it at the time, calling the ban “an authoritarian-like move to take advantage of a crisis and advance his anti-immigrant agenda.” The green card ban was originally set to end on March 31—that is, until Biden terminated it this week.

“This ban was a preventable tragedy that has kept fathers and mothers from children, spouse from spouse, and exacerbated the stress and anxiety over the last year for many families,” American Immigration Lawyers Association director of litigation Jesse Bless said. The organization was a part of the coalition that sued the previous administration last year on behalf of people like Nazif Alam, a plaintiff and green card holder who’s been separated from his wife for more than two years now.

“I am really looking forward to spending time with my wife again. After so much waiting, we can finally start our American dream together,” he said. “It is our diversity and our ability to bring great people from around the world together that makes this nation strong. It is great that the federal government is finally helping families reunite.”

“AILA welcomes the decision to lift the ban and allow long-suffering families to lawfully reunite,” Bless continued. “With nearly half a million people waiting in the backlogs, it will take an extraordinary feat of government coordination to process everyone in time and many are still at risk of losing their visas.” But the organization said that while the green card ban has been rescinded, a second ban put in place by the previous president still remains, at least until its scheduled expiration at the end of next month.

“The other visa ban issued under Proclamation 10052 continues to block the entry of temporary foreign workers who advance important interests of the United States, and the health insurance proclamation is an unlawful hurdle to the entry of immigrants,” Bless said. “America’s beacon of promise can only shine bright when the administration fully lifts all of former President Trump’s reprehensible bans.”

Even if—if!—you’d taken the previous president at his word that his restrictions were to protect the nation amid the pandemic (I know, I know, just follow along with me), they actually hurt the nation amid the pandemic. ProPublica’s Dara Lind reported that, surprise, a number of doctors who should’ve been exempted found themselves stuck outside the U.S. and were approved only after the outlet pressed the previous administration.

The previous president’s actions have devastated the legal immigration system, kept families separated, and hurt the nation amid the pandemic under a lie of being in response to the pandemic. The restrictions need to go entirely. “The Trump nativist agenda has always been cruel, unpopular, and bad policy,” America’s Voice Director of Communication Doug Rivlin said in criticizing the restrictions last summer, “but it’s now actively harming our national response to the pandemic and directly threatening many of the workers America is relying on and grateful towards.”