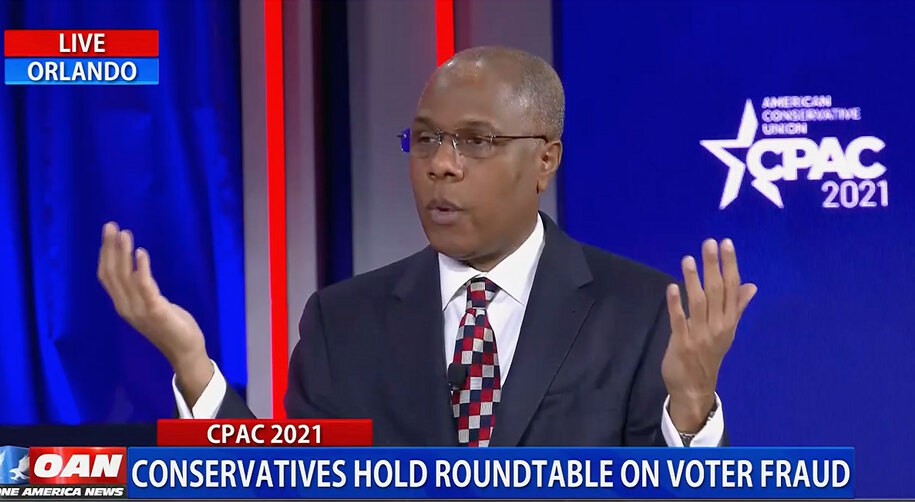 It’s the Conservative Political Action Conference (CPAC) 2021! That’s when the world gets to listen to quotes from conservatives and say, “Wait, did someone actually say that out loud?” Friday saw speaker after speaker after speaker promoting well-proven lies. Lies about mask-wearing, lies about the pandemic, and lies about the election. So many lies about the the 2020 election that OAN, fearing more lawsuits, cut away at least once to give the audience a disclaimer saying that they should do their own research on these claims. At one point during the day a discussion took place where a few panelists took turns telling the audience why we needed to suppress voting rights. The argument here was that absentee ballots and vote-by-mail initiatives needed to come to an end because, well, Democratic candidates seem to win when there’s more democracy taking place.

Once such panelist, right-wing columnist and pundit Deroy Murdock, added an interesting twist on why absentee ballots were anti-democratic: family domestic violence in the form of insulin extortion. Yes. That is a real sentence, and that sentence is exactly what I meant to write. Referring to Hillary Clinton’s comments concerning white married couples—specifically white married women—feeling pressure to vote along the same lines as their husbands, the panelist first made a joke about how ridiculous this statement was, and then followed up by making a similar but far more ridiculous statement regarding absentee voting. Murdock finished his mind-numbing theoretical voter fraud thought experiment by remembering the good old days.

Murdock’s opening was classic CPAC pandering: an attack on the ghost of a powerful Democratic woman.

DEROY MURDOCK: Hillary Clinton said one of the reasons that she lost the election in 2016 was that the pro-Trump husbands were forcing their pro-Hillary wives to vote for Trump. Okay, and we all laughed at that. And it sounds like yet another of her 1,000 excuses as to why what happened happened.

We can argue about this and the data supporting the reality of married couples and their voting habits, but whether or not this was why Hillary Clinton lost the 2016 election to Donald Trump still has next to nothing to do with simply supporting people’s right to vote, and most importantly, making it easier to vote. But guess what? Murdock is about to now say that Hillary Clinton is right—though he doesn’t actually say that, he just uses the argument he made up for Clinton, which he then dismissed as laughable and now espouses as an excuse to end voting rights.

MURDOCK: But there probably are instances where you’ve got a very abusive spouse. It could be the wife beating up the husband or the husband beating up the wife, whatever the case may be. Or it could be, ‘Ah okay, Grandpa, if you don’t vote the way we want, you know, you’re not going to get your insulin this afternoon.’ Or whatever else it is.

The idea that any person who supports the suspected serial sexual assaulter Donald Trump is worried about domestic violence is a … tough pill to swallow. It was Donald Trump’s Department of Justice that changed the definitions of “domestic violence” and “sexual assault” to take the teeth out of them legally. That’s just a side note and hopefully something the current Democratic administration in office will fix.

Murdock goes on to say that in the privacy of the voting booth, this pretend poor old conservative grandfather can vote for the political party that refuses to do anything to counteract or end the skyrocketing costs of insulin, and then lie to his “obnoxious relatives” so that he can get his wildly expensive insulin. At the kitchen table with his absentee ballot, Grandpa is instead at the mercy of his liberal socialist good-for-nothing kids. I mean this hypothetical grandpa probably has abusive kids who support trans rights! But in the end, the thing Murdock is really having a sad frowny-face about is how we need to return to the good old days.

The other thing I’d add very briefly is there’s something beautiful I think about the way we used to vote. Which is we show up on Election Day, you go to the local firehouse, the local school school room, whatever it is, and we, the American people, on one day in November—the first Tuesday after the first Monday in November—decide who our leaders will be, and there’s something very moving and touching. And then they count the ballots about midnight or so, and we know who’s going to govern us.

He ends this applause-inducing pablum by saying: “I think we need to go back to the old model.” Murdock is a first-generation American whose parents were from Costa Rica. He is of Latino and African descent. The “old model” he’s talking about would strip him of not only the right to vote, but the right to own his labor. In the “old model,” Murdock would be considered about three-fifths of a human being, but only to pad Senate representation for land over people. In the “old model,” Murdock would not be allowed to learn to read or write, and forget about being openly gay.