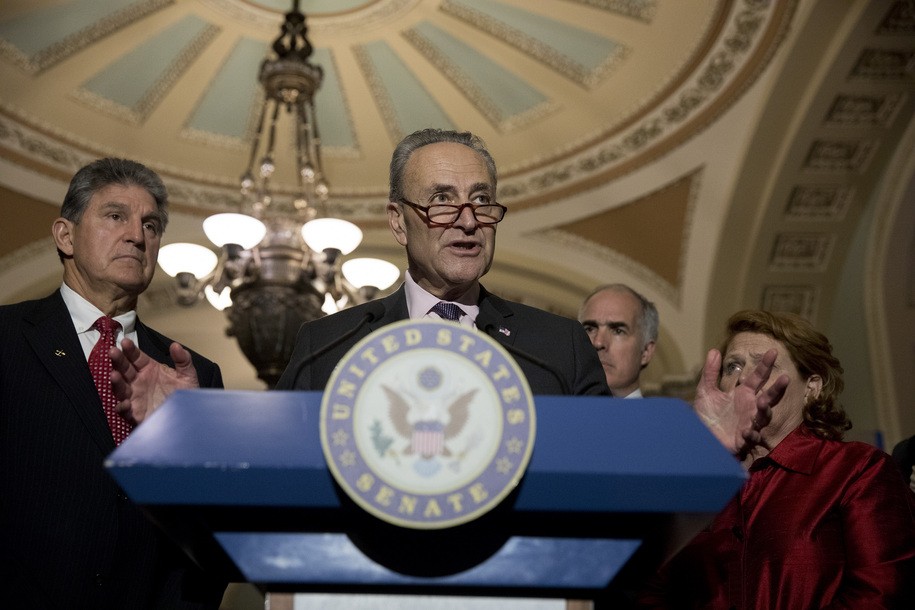 The Senate could kick off floor consideration of the $1.9 trillion American Rescue Plan as soon as Wednesday, and not a moment too soon for the millions of people who could see the unemployment insurance end March 14. The Senate is going to move forward with a bill that doesn’t include a hike in the minimum wage to $15 an hour. The last time the federal minimum wage was increased was 2009, and the 11 years since have been the longest period to lapse without a wage hike in the eight decades since the minimum wage was established.

That makes maintaining the spending levels in the bill—particularly the direct aid to people—all the more critical. But there are some Senate Democrats who want to curtail it. That includes Sen. Joe Manchin, who is still fighting to get those one-time $1,400 survival checks—already reduced from the promised $2,000 that helped win the Georgia Senate races—sent to fewer people. Because he is of the opinion that individuals who made $50,000 in 2019 are doing just fine without help. He pitched that idea to President Joe Biden in a conference call Monday in which other “moderate” Democrats participated.

Manchin also argued that $400 a week in extra unemployment is too much and that Democrats should revert to the $300 a week that Republicans agreed to in the last round of stimulus. Because that’s why Democrats took the majority? According to sources to the Post, Biden “is not expected to support cutting the benefit from $400 to $300.” So there’s that. There is going to be a fight, though, to change the extension of these UI benefits to last through September. The House bill ends the boost at the end of August. Sens. Ron Wyden and Mark Warner are leading the effort to extend that expiration.

Sen. Jon Tester of Montana was also on the call with Biden Monday, and gave Manchin some back up with the talking point that the deficit peacocks have come up with, saying to reporters after that they were focused on “targeting the dollars … it wasn’t talking about reducing it, just targeting” assistance. Which is definitely reducing if it’s Manchin doing the talking. Which it was. “We’re just looking for a targeted bill,” Manchin told reporters, saying that he and the others “want it to be very targeted, helping the people that need help the most.” The people who arguably need it the most are the unemployed, who he wants to help—but not that much, apparently.

According to Tester, Biden was “receptive” but did not agree to anything they asked for, which is good. Because the more they want to tweak and cut this, the more jeopardy it puts the whole process in between now and March 14. The bill will still have to get 50 Democratic votes plus Vice President Kamala Harris, and trying to force austerity into the mix will just complicate getting those votes. Because the Senate is making changes, it will have to be passed again in the House where it already passed with extremely slim margins. That step that is already going to eat up valuable time, and if there are substantive changes in help given to people, it could complicate matters even more there.

Another change two of the other senators on the call—Maine’s Angus King and Virginian Mark Warner—was to take a chunk of the $350 billion in the bill for state, local, and tribal governments and dedicate to expanded broadband. That’s not a horrible idea. They want $50 billion of the package to it. “We have literally 700,000 Virginians that have gone through COVID without high-speed broadband connectivity. That makes it virtually impossible to work at home, learn at home, to receive the benefits of telehealth,” Warner told Virginia station WHSV. “We need to make sure that every home in America has that high speed broadband connectivity at an affordable price.”

Mark Zandi, the chief economist for Moody’s Analytics, has lowballed the budget shortfall state and local governments are facing, saying it will be approximately $60 billion through fiscal 2022, adding heft to the argument that those funds should be repurposed. Jason Furman, a former senior Obama administration official, is also making that argument. “The state fiscal relief total [in the bill] exceeds the amount states immediately need,” he told the Post. “It should either be better defined by focusing on what it should be spent on, like infrastructure or broadband; what it should not be spent on (like tax cuts); or the total should be reduced.”

The U.S. Conference of Mayors definitely begs to differ on the idea that localities don’t need money. Tom Cochran, CEO and executive director of the group, told the Post: “There is no indication from the House side or the White House that is not totally supporting the fiscal support for state and local governments. But the Senate throughout the pandemic has left state and local aid on the cutting-room floor. That’s where the drama is going to be,” he said. “You have to have the Democrats stand with the president to withstand this pressure. We have to make sure these senators stay with the president.”

The White House is not changing focus, at least not in public statements. “The president’s focus this week and in coming weeks, until it’s passed, is on the American Rescue Plan,” Press Secretary Jen Psaki said Monday. “It’s absolutely critical Congress act, and we certainly hope they do that as quickly as possible.” This will be Biden’s primary focus for the week, according to Psaki. “We reserved time in his schedule to ensure that he can be engaged, roll up his sleeves, and be personally involved in making phone calls, having more Zoom meetings, potentially having people here to the Oval Office to [get] this across the finish line,” she said. “And I expect him to be very involved personally.”

Senate Majority Leader Chuck Schumer echoed that on the floor Monday. “[T]he American people sent us here with a job to do: To help the country through this moment of extraordinary challenge. To end, through action, the greatest health crisis our country has faced in a century. And that’s just what we’re going to do.”