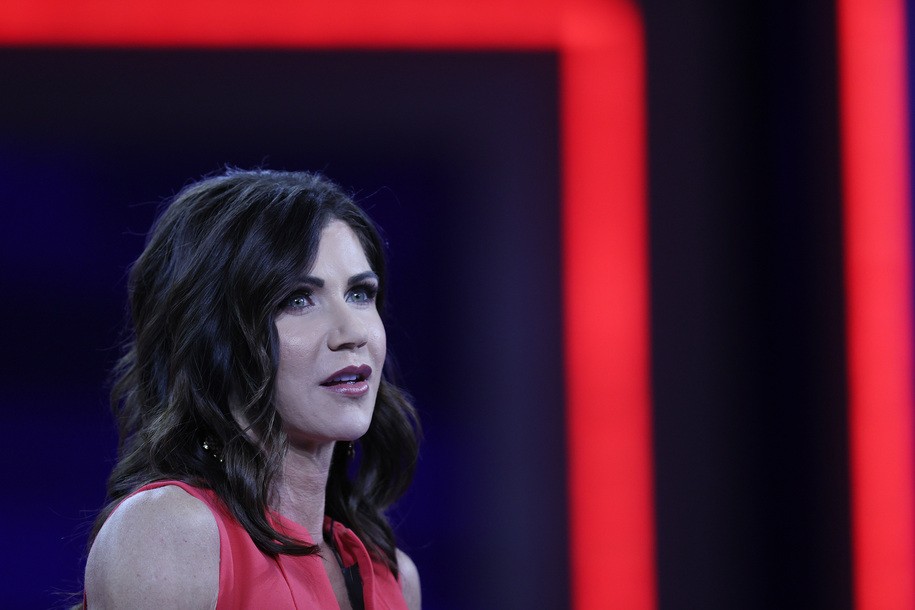 South Dakota Gov. Kristi Noem continued setting herself up for a 2024 presidential run with a speech at the Conservative Political Action Conference (CPAC) on Saturday, then headed to another traditional venue for a presidential contender: a Sunday morning political news talk show. If you go by surface appearances, the latter did not go nearly as well as the former, but in today’s Republican Party a disastrous interview with the traditional media is a badge of honor, so the whole weekend probably played out about like Noem wanted … Except for the part where she only got 4% in the CPAC straw poll, or 11% if Donald Trump doesn’t run.

Noem’s favorite topic for elevating her national profile is her disastrous performance on COVID-19. To hear Noem tell it, it’s all a huge success because she didn’t impose any significant public health restrictions on South Dakota, which was great for the state’s economy. “Let me be clear—Covid didn’t crush the economy, government crushed the economy,” she said at CPAC Saturday. She went on to take a shot at Dr. Anthony Fauci, saying: “Dr. Fauci is wrong a lot.”

Basically, South Dakota was spared the early surge of the virus and didn’t get hit hard until doctors and scientists had improved the available treatments and understanding of the disease, which kept it from having it death and hospitalization rates equal to its standing on total cases per capita. But once the coronavirus reached South Dakota, every measure has been abysmal, and that’s lying right at Noem’s feet.

Margaret Brennan, the anchor of CBS’ Face the Nation, confronted Noem with some of the results of her intentional mismanagement.

“If you look at starting in July, which was after that spring peak, you have the highest death rate in cumulative COVID deaths per million in the country. The CDC says you have the eighth highest death rate per capita now. I’m not talking about infection rates,” Brennan said. “I know you’re conservative and you care about the sanctity of life. So how can you justify making decisions that put the health of your constituents at risk?”

Noem dodged: “And those are questions that you should be asking every other governor in this country as well.” She then went on to claim that “what we’re seeing is that the mandates aren’t necessarily what’s working” while boasting the second-highest infection rate per capita in the country. Noem’s take basically translates to, “My results are terrible, but that’s no reason to believe that the better results of places with different policies are meaningful.”

Noem’s take was also pre-butted on Face the Nation by Fauci. Shown Noem’s CPAC comments, he said that “it is not really helpful because sometimes you think things are going well and just take a look at the numbers. They don’t lie.”

The numbers don’t lie, but Noem sure as hell lies about the numbers and what they mean. And she intends to keep doing that right through to 2024 as a badge of honor.