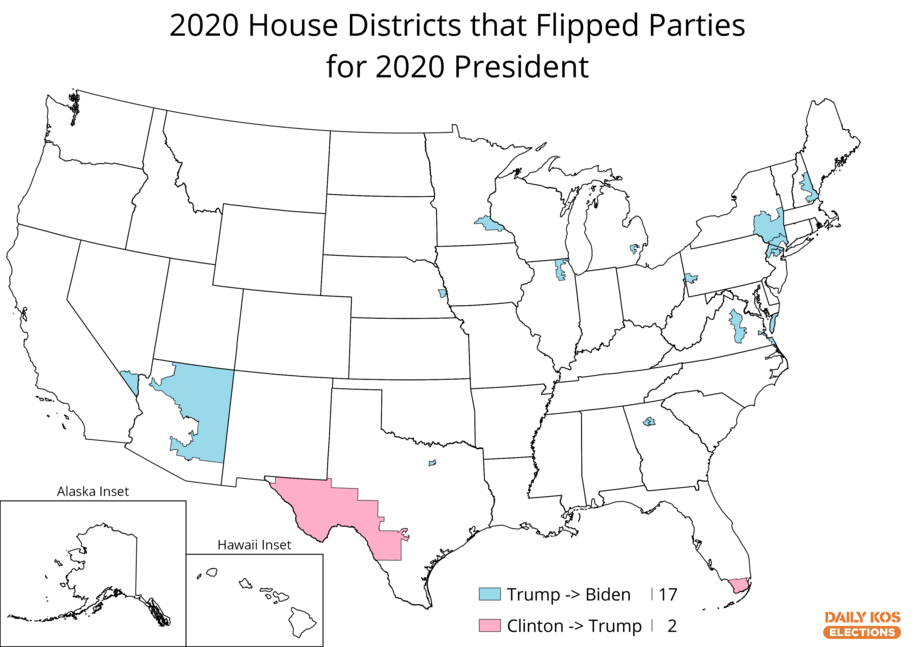 Thanks to the recent completion of Daily Kos Elections’ effort to calculate the 2020 presidential election results by congressional district, we now know that Joe Biden won 224 districts to Donald Trump’s 211, a net increase of 15 seats for Democrats compared to the 2016 results under the same district lines. As shown on the map at the top of this post (see here for a larger version), 17 districts flipped from backing Trump in 2016 to Biden last year, while two districts switched from supporting Hillary Clinton four years ago to voting for Trump in 2020.

The districts that changed hands share some demographic commonalities, and many were competitive at the House level in November. Those that went from Trump to Biden include many historically red suburban seats with high levels of college education and voters who have grown increasingly hostile to the Republican Party under Trump. That’s an extension of the pattern seen in 2016, when Clinton also flipped many historically red suburban seats.

Texas’ 23rd stands out in particular because it flipped twice over the last decade, having supported Mitt Romney in 2012. Five districts, meanwhile, showcased the opposite pattern, going for Barack Obama, then Trump, then Biden: Minnesota’s 2nd, Nevada’s 3rd, New Hampshire’s 1st, and New York’s 18th and 19th.

Only two of these 19 districts backed a different party at the House level compared to the top of the ticket: Nebraska’s 2nd District and Texas’ 24th District, both of which voted Biden but returned Republicans to Congress in spite of hard-fought Democratic efforts to win them last year.

In addition to the traditional map above, we have also created a cartogram below that shows every district as the same size so that dense populated districts in urban areas aren’t obscured and rural districts aren’t over-emphasized. Since many of the Trump-to-Biden districts were relatively small suburban seats geographically speaking, they become much more prominent when presented as a cartogram (click here for a larger version):

Finally, the chart below shows us who these members of Congress actually are, along with the results of the 2020 House election, 2020 and 2016 presidential elections, and a comparison between the two presidential results (a larger version is here).

You can find the election results for House and president for every district in our 117th Congress guide spreadsheet here, along with a whole host of other demographic statistics on both the districts and the members who represent them.