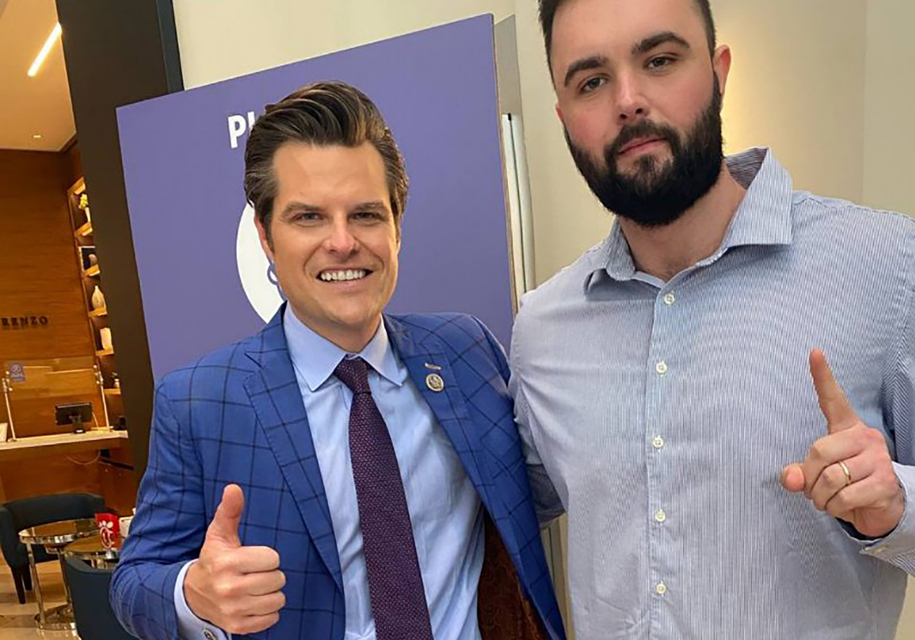 Trumpist Republican politicians like Florida Congressman Matt Gaetz appear to be mimicking their role model’s ability to send comforting signals out to white nationalists while managing to keep them at arm’s length for the sake of plausible deniability. He showed how it’s done this past weekend at the Conservative Political Action Committee’s annual convention in Orlando.

A cluster of young white nationalists attending the simultaneous America First Political Action Committee convention—organized by notorious “Groyper Army” leader Nicholas Fuentes—invaded the CPAC gathering, where Fuentes has been banned, on Saturday. They managed to find Gaetz, who took photos with one of the group’s leaders—an outspoken neo-Nazi who uses the nom de plume “Speckzo”—and briefly conversed with them, apparently acknowledging his familiarity with Fuentes.

The video of the interaction shows one of the Groypers asking Gaetz if he was familiar with Fuentes. Gaetz made an indistinct reply while walking away with an aide, pointing a raised index finger in the direction of the young men.

Gaetz has a history of such dalliances with far-right extremists. In 2018, he invited notorious white nationalist Chuck Johnson to the State of the Union address, giving Johnson one of his tickets to the event. Gaetz claimed disingenuously that Johnson had just happened to drop by his office the day before to discuss their mutual political interests—which Johnson claimed were marijuana, bitcoin, Trump, and animal welfare—and a spare ticket had become available.

In 2019, Gaetz hired a white nationalist named Darren Beattie to work in his office as a speechwriter. Beattie had been previously fired from the Trump administration after his connections to white-nationalist organizations was exposed. Beattie later was appointed by Trump to an international commission that oversees preservation of Holocaust-related historical sites, much to the dismay of the Anti-Defamation League. Gaetz later ran into trouble with House ethics rules for using taxpayer funds for Beattie’s salary.

Fuentes himself had attempted to enter the CPAC convention hall on Saturday with a group of fellow “Groypers,” but was turned away by organizer and security. “CPAC sucks. It’s gay,” Fuentes told the people who had gathered to watch the confrontation. “We made our point. Masks don’t work. CPAC is gay. They’re not conservative.”

As Twitter user Sarlacc Attack posted afterward, a number of the Groypers posted photos and videos from their excursion on Telegram. One of the most prolific of these is the man who uses the “Speckzo” pseudonym, who posted photos of himself with both Gaetz and Fuentes.

“Speckzo,” whose identity is currently unknown but who has boasted on social media that he lives in New York and makes $100,000 annually from his online video rants, is noteworthy for openly embracing Nazism, denying the Holocaust, and expressing sympathy for Adolf Hitler. He also has said he considers electoral democracy a failure, blaming women’s suffrage and allowing poor people to vote, adding that he considers monarchy the best political system. In one of his online rants, he also defended the enslavement of Black people, claiming they were better off under the system of slavery.

“Speckzo” also managed to get a selfie portrait of himself with Arizona Congressman Paul Gosar, who addressed the America First crowd on Saturday, a day after sharing a panel at CPAC.

Fuentes’ “Groyper Army” has been intimately involved in the extremist right’s efforts to keep Trump in the presidency. Fuentes—who vowed to “destroy the GOP” if it failed to defend Trump adequately—spoke at both pro-Trump “Stop the Steal” rallies in Washington, D.C., on Nov. 14 and on Dec. 12, accompanied by his followers, and was present on Jan. 6 at the pro-Trump rally preceding the attack on the U.S. Capitol. A member of the “Groyper Army,” 22-year-old Riley Williams of Pennsylvania, faces multiple charges for her role in the Jan. 6 insurrection, and is believed to have stolen a laptop computer from House Speaker Nancy Pelosi’s office.

Gaetz no doubt will claim he had no idea who he was posing with on Saturday and brush off the association. But the problematic aspect of the selfies he took is less who he associates with, but instead the kind of people who seek out his approval.