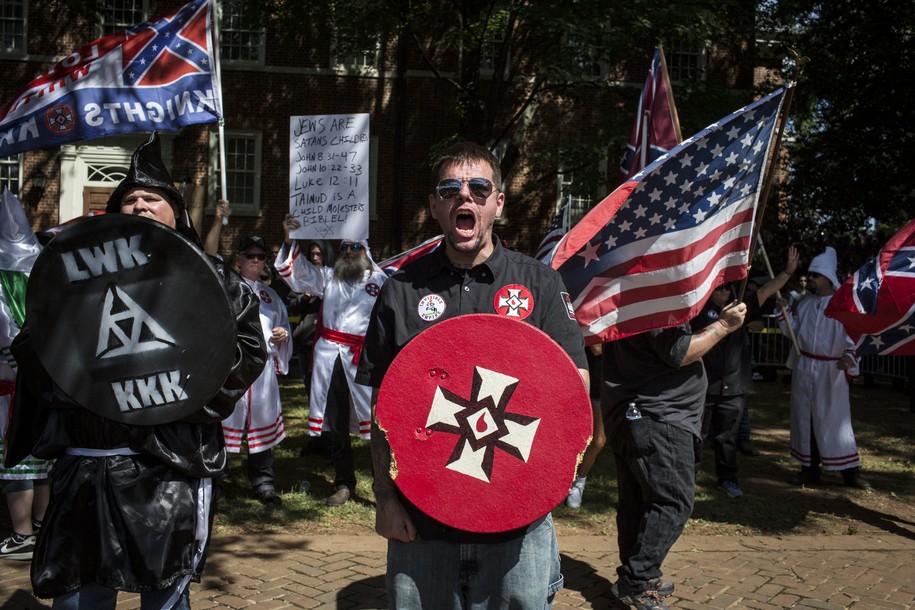 A Black prosecutor decided not to charge a Detroit man who flew a Ku Klux Klan flag in his window near a Black family who lived next door. Wayne County Prosecutor Kym Worthy called flying the flag “horrible conduct” but ultimately found it didn’t break the law, according to the Associated Press.  She’s now asking legislators to prioritize changing the law. “There is absolutely no question that what happened to Ms. (JeDonna) Dinges was despicable, traumatizing, and completely unacceptable. But, very unfortunately in my view, not a crime,” Worthy said in a news release. “The KKK flag, while intending to be visible to Ms. Dinges, was hanging inside of her neighbor’s house. We could not even begin to charge Ethnic Intimidation under current Michigan law.”

A Michigan statute spells out that in order for a person to be guilty of ethnic intimidation, “there must be physical contact, damage, destruction, defacement of property, or threats to do so,” Worthy’s office said in the news release.

“A person is guilty of ethnic intimidation if that person maliciously, and with specific intent to intimidate or harass another person because of that person’s race, color, religion, gender, or national origin, does any of the following:

(a) Causes physical contact with another person.
(b) Damages, destroys, or defaces any real or personal property of another person.
(c) Threatens, by word or act, to do an act described in subdivision (a) or (b), if there is reasonable cause to believe that an act described in subdivision (a) or (b) will occur.
(2) Ethnic intimidation is a felony punishable by imprisonment for not more than 2 years, or by a fine of not more than $5,000.00, or both.
(3) Regardless of the existence or outcome of any criminal prosecution, a person who suffers injury to his or her person or damage to his or her property as a result of ethnic intimidation may bring a civil cause of action against the person who commits the offense to secure an injunction, actual damages, including damages for emotional distress, or other appropriate relief. A plaintiff who prevails in a civil action brought pursuant to this section may recover both of the following:
(a) Damages in the amount of 3 times the actual damages described in this subsection or $2,000.00, whichever is greater.
(b) Reasonable attorney fees and costs.”

Worthy said in her statement: “I strongly encourage the Michigan Legislature to look, revise, and create laws to protect citizens from this kind of horrible conduct.” Dinges, 57, told the AP she could see the flag from her dining room on Feb. 16, and even before seeing it, her security camera caught a full gas can in her recycling bin, which scared her. “I hope the lawmakers are listening,” she said.

Michigan Sen. Erika Geiss said in a tweet Wednesday she learned of the legal restrictions when a colleague of hers wore a mask with what appeared to be a Confederate flag printed on it last April on the Senate floor. “It is absurd that we have to put it in writing to not wear a Confederate flag or similar white supremacist regalia while in this body doing the work of the people,” Geiss told The Detroit News. “But apparently, we do.” Michigan Sen. Dale Zorn ultimately apologized for wearing the mask and said it did not actually picture the Confederate flag, according to the news station WLNS. “I did not intend to offend anyone; however, I realize that I did, and for that I am sorry,” he said. “Those who know me best know that I do not support the things this pattern represents.

“My actions were an error in judgment for which there are no excuses and I will learn from this episode.”

Cynthia Douglas, president of the Grosse Pointes-Harper Woods NAACP Branch, told the news nonprofit Michigan Advance that Worthy didn’t have any other choice but to follow the law. “She has to go by the statute. And that’s what she did, so now it’s up to us,” Douglas said.

RELATED: California Vons lets shopper in KKK hood make it to the checkout line without throwing him out