Which House districts saw the biggest shifts in the 2020 presidential election? 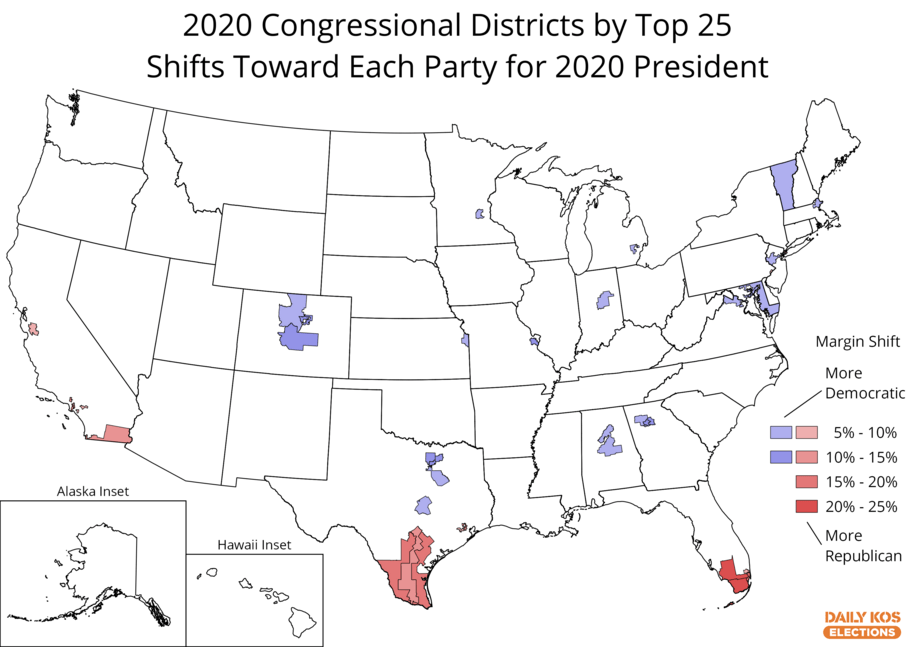 Using Daily Kos Elections’ recently completed calculations of the 2020 presidential result by congressional district, the map shown at the top of this post (see here for a larger version) identifies the 25 districts that saw the largest shift by margin toward each party between 2016 and 2020. Overall, Joe Biden improved over Hillary Clinton’s performance in 319 districts while Donald Trump performed better than he did in 2016 in 116 districts.

Districts where Biden improved the most over Clinton’s results almost universally have relatively high levels of educational attainment, concentrated especially in affluent suburban areas that have historically favored Republicans. Many of these districts previously saw Clinton exceed Barack Obama’s level of support eight years ago and continued their march to the left in 2020.

The districts where Trump turned in a notably better performance, meanwhile, were almost all home to large communities of color, with the shift most pronounced in regions with sizable Latino majorities. It was a considerably different story from four years earlier, when Trump’s biggest gains were concentrated in districts with large white working-class populations.

Trump’s 2016 results in many of these heavily Latino districts represented a relative low point for Republicans, but in some areas, such as South Texas, his 2020 showing was actually better than even Mitt Romney’s eight years earlier. A few of these districts are genuine swing districts, but many, like those in Los Angeles and New York City, are heavily Democratic thanks to their high diversity and remained so in 2020 even though Trump increased his support.

The biggest move to the left came in Texas’ 3rd District, which went from 55-41 Trump in 2016 to just 50-49 Trump last year—a shift of 13 points. Located in the affluent suburbs north of Dallas and represented by Republican Rep. Van Taylor, Texas’ 3rd has the highest proportion of residents holding college degrees of any district still held by the GOP, with 54% of adults having graduated from college. Taylor still managed to run well ahead of the top of the ticket, though, defeating Democrat Lulu Seikaly 55-43.

The largest drift in the opposite direction, meanwhile, was in Florida’s 26th District in the Miami area, which lurched from 57-41 Clinton to 53-47 Trump in 2020 for a mammoth swing of 22 points. That shift also helped Republican Rep. Carlos Giménez flip the seat from Democratic Debbie Mucarsel-Powell, who herself had just ousted a Republican incumbent in the 2018 blue wave. The 26th has a large Cuban-American population, which has traditionally supported the GOP in great numbers, and is also home to many with ancestry from elsewhere in Latin America.

In addition to the traditional map above, we have also created a cartogram below that shows every district as the same size so that dense urban districts aren’t obscured and rural districts aren’t over-emphasized (with a larger version here):

The two charts below, meanwhile, tell us who actually represents each of these districts, along with the results of the 2020 House election, the 2020 and 2016 presidential elections, and a comparison of the 2020 House and presidential results in each district. The first version below shows the districts that moved the furthest to the left (a larger version is here):

The second chart below shows the districts that shifted the most to the right (a larger version is here):

You can find the election results for House and president for every district in our 117th Congress guide spreadsheet, along with a whole host of other demographic statistics on both the districts and the members who represent them.