How bad was the Trump administration for Americans’ health? In a word, horrible 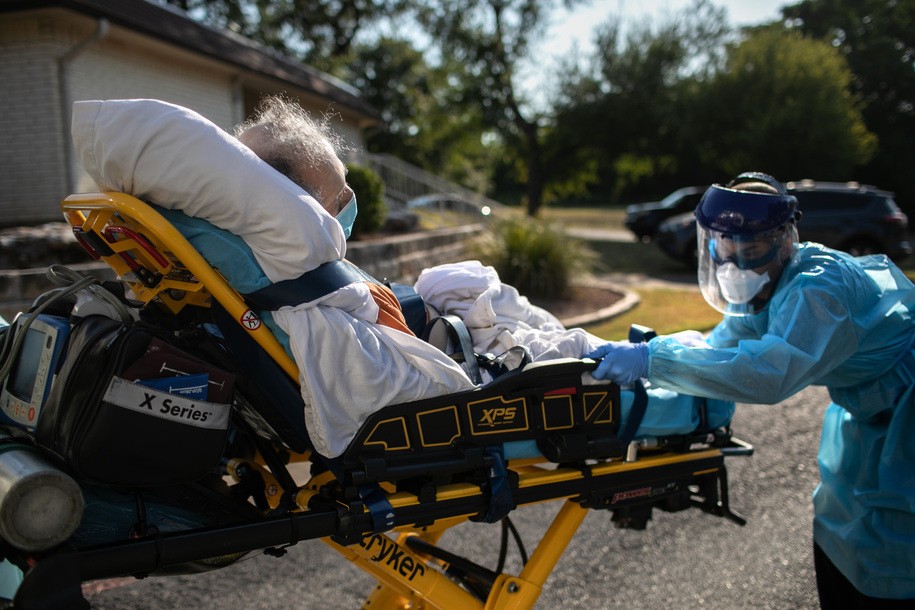 In February, 33 medical doctors, lawyers, and academics from various health and policy-related fields in the U.S., the U.K., and Canada released the first major comprehensive report examining the impact of Donald Trump’s presidency on this country’s public health policies, and the consequences to Americans’ lives as a result. These commissioners were chosen for their recognized expertise in relevant disciplines (including clinical medicine, epidemiology, public health, community medicine, and nutrition, among others), as well as law and politics. The group, called the Lancet Commission on Public Policy and Health, was also carefully weighted to include substantial representation by women and people of color.

Their report, “Public Policy and Health in the Trump Era,” is the product of four years of research and data accrual and analysis. It has been previously referenced on Daily Kos here and here; however, due to its length and fulsome content (10 separate sections, buttressed by 368 footnotes), it is not easily summarized. Not only are the adverse effects of Trump’s health policies examined and placed in context, but also the harmful social and political repercussions of an administration that plainly sought to distance itself from the global health community through its virulent, xenophobic aims.

The report is more than simply a devastating indictment of the Trump administration, although it certainly succeeds in that respect.

The exacerbation of income inequality and other societal problems in the U.S. that preexisted Trump’s ascent to power, caused in large part by decades of regressive tax policies favoring the wealthy, gross racial disparities in incarceration, education, and housing, and the privatization of employee healthcare and decline of union membership are also explored, since those factors are inextricably tied to the debilitation of Americans’ health, life expectancy, and well-being. Each section within the report includes a historical backdrop to place Trump’s actions in context. Notably, the authors point out that many of these problems—such as increased wealth disparity—provided a fertile breeding ground for someone like Trump in the first place, by heightening Americans’ susceptibility to racist and xenophobic appeals.

Even with this ambitious, all-inclusive scope, the absolutely damning character of the report’s conclusions regarding Trump’s singular impact on the country is stunning enough to deserve broader exposure here and elsewhere. If nothing else, the Lancet report serves as a reminder of just how much damage can be inflicted on this country and its people by a malevolent and thoroughly amoral executive branch. The policies put into place by Donald Trump resulted in tens, if not hundreds of thousands of very real deaths; the authors also stress that the consequences of those polices will continue to harm the country well into the foreseeable future, despite policy reversals that can be implemented by the Biden administration.

Probably the most glaring metric showing exactly how toxic and harmful the Trump administration was to this country’s overall health is the regularly updated map depicting the worldwide spread and prevalence of the SARS-CoV-2 virus, such as the COVID-19 dashboard prepared by the Johns Hopkins University of Medicine Coronavirus Resource Center.

As can be seen in that figure, nearly the entire U.S. landmass remains bathed in a sea of red, one year after the pandemic began. On the left are the number of total reported COVID-19 cases. The number of COVID-19 infections in the U.S. is now nearly three times that of India, a country with four times the population of the United States, with a drastically poorer population and medical infrastructure.

The Lancet report’s authors confirm outright what has been painfully apparent to most Americans for over a year now: The Trump administration “expedited the spread of COVID-19 in the USA.” The consequence of that intentional disregard of Americans’ health has resulted in over 530,000 deaths, approximately 40% of those deaths traceable to sheer malfeasance (based on deaths, the study notes, “which could have been averted had the U.S. death rate mirrored the weighted average of the other G7 nations.”) In short, using that metric, Trump can fairly be deemed responsible for the COVID-19 related deaths of approximately 200,000 Americans—people who would not have died had this administration followed the practice of other similarly situated developed countries … our economic “peers,” so to speak.

The report chronicles the winnowing of our federal agencies during Trump’s tenure, specifically the compromise and outright abandonment of emergency preparedness in agencies such as the CDC and OSHA, and the essentially forced departure of hundreds of top agency scientists. All of these prior actions contributed to an environment where the occurrence of something as profound as a global pandemic could not even be effectively assessed, let alone managed or combated. Of course, Trump’s own personal behavior, his repeated lies about the virus’ severity, his touting of phony cure-all drugs, and his insidious scorn of protective measures (such as wearing masks) were the most visible factors preventing this country from effectively fighting and defeating the virus.

But exacerbating the COVID-19 pandemic was only the most obvious public health consequence of Trump’s four years in office. For example, as the report notes, ”(h)is signature legislative achievement, a trillion-dollar tax cut for the wealthy, opened a budget hole that served as justification for cuts to food and housing subsidies that prevent malnutrition and homelessness for millions of people in the USA; the number of homeless schoolchildren increased by 150 000 in the first year of Trump’s presidency.” Likewise, the number of uninsured Americans increased by 2 to 3 million throughout his tenure, thanks in part to Trump’s continuous and concerted efforts to sabotage the Affordable Care Act.

Put simply, the malevolence of the Trump administration stymied nearly all governmental initiatives that could have improved the health of Americans, with predictable results. His intolerant, draconian immigration policies, for example, discouraged many immigrants from even seeking health care, while his single-minded religious zealot appointees succeeded in rolling back health care coverage for LGBTQ people and family planning measures for women.

The Lancet authors also provide a detailed backdrop of public health disparities due to geographic factors, socioeconomic status, and institutional, systemic racism, linking them to rising mortality and “deaths of despair” (preventable fatalities caused by substance abuse and suicide) among people of color, particularly Black, Latino, and indigenous peoples, as well as whites on the lower end of the economic spectrum. These endemic American problems were (and are) acutely exacerbated by the COVID-19 pandemic, aggravated further by a Trump administration unwilling to address or acknowledge them, and by a halting, uneven response in the various states as a consequence.

The report places public health in the context of this country’s long, entrenched history of racism toward U.S. citizens or, even more acutely under Trump, toward immigrants. Both the long and short-term public health consequences of this chronic American culture of racism and indifference to poverty are examined.

If there is not a major reversal of federal policy, the drivers of US health stagnation are likely to persist. The increasing precarity of work in the so-called gig economy (ie, an economy based on short-term freelance work rather than permanent jobs) and job losses associated with automation, further threaten economic security. Persistent wealth gaps and other manifestations of structural racism will continue to privilege white people. Mortality trends will continue to favour cities where resurgent tax bases enable stronger public health and social programmes, which will widen existing geographical health disparities. Environmental degradation of rural areas exploited as corporate dumping grounds for agricultural and extraction-industry pollutants will harm health for generations.

But possibly the most insidious harms inflicted directly by the Trump administration were those that, for the most part, still cannot be measured, such as his underreported sabotage of the nation’s food supply and his more highly publicized rollbacks and gutting of environmental regulations.

With regard to food and nutrition, the Trump administration deliberately and systematically undermined public health needs to curry the favor of corporate agribusinesses.

In every domain of food and nutrition policy, the Trump administration consistently supported corporate rather than public health interests, with no policy domain too insignificant to be ignored. Among its many actions, the Trump administration weakened standards for organic foods, permitted the speeding up of poultry slaughter lines, used farm-support funds for prisons, allowed finely textured beef (known as pink slime) to be labelled as ground beef, permitted delays in complying with menu-labelling regulations, held back on issuing warning letters to companies violating labelling regulations, and blocked a UN panel (known as the WHO Independent High-Level Commission on NCDs) from endorsing soda taxes as a strategy to combat obesity. Beyond such small measures, the administration’s actions are likely to cause the most lasting damage in three food areas: the USDA’s research programme, SNAP, and school meals.

By tying work-based requirements and imposing other barriers to receiving SNAP benefits ( “By far the largest anti-hunger programme in the USA and a vital component of the safety net for low-income US residents”), the Trump administration again demonstrated its commitment to eroding public health on the basis of race, as these measures, including rollbacks in school lunch requirements, disproportionately impacted the poor, particularly poor people of color.

Evidence is already accumulating that the Trump administration’s weakening of environmental and occupational standards is increasing disease and death in the USA, especially among children, older people, and workers. Between 2016 and 2019, the annual number of environmentally and occupationally related deaths increased by more than 22 000, reversing 15 years of steady progress.

The authors note that those additional 22,000 deaths (charted by the authors and based on a comprehensive study prepared by the Health Effects Institute) are likely from air pollution resulting from rollbacks on particulate matter regulations.

And of course, there are the long-term health consequences of four years of climate denialism at the federal level, four years that—despite the urgent efforts of the Biden administration to reverse his predecessor’s policies—the American public can never really recoup.

President Trump’s climate denialism will probably be his most enduring environmental legacy. The Trump administration’s encouragement of coal, oil, and gas combustion, and its weakening of emissions standards, are accelerating the release of greenhouse gases such as CO2 and methane, which will remain in the atmosphere for decades. The global warming caused by release of these gases will increase the frequency of heatwaves, coastal flooding, violent storms and wildfires, and expand the ranges of vector-borne diseases such as dengue virus, Zika virus, and West Nile virus. Deteriorating air quality will increase global mortality from respiratory and cardiovascular conditions (eg, acute myocardial infarction, stroke, chronic obstructive pulmonary disease, and lung cancer.) Some parts of the world could become uninhabitable because of heat, humidity, and pollution, whereas others will suffer shortages of food and water. One review estimates that weakened environmental protections could lead to an additional 80 000 deaths over the next decade and exacerbate respiratory problems in more than 1 million people in the USA.

In spite of this numbing litany of malice and damage to the public health wrought by a single administration, the Lancet’s authors provide some reason for hope; They end their report with a substantial section advocating strategies for mobilization, including issue framing and coalition building, and a long list of recommendations for executive and legislative actions, some of which have already been accomplished by the Biden administration. Of course, the most effective of any actions would be to ensure that no one like Donald Trump is ever again permitted to hold power.
But even if that occurs, the twin scourges of racism and inequality in this country, and their impact on public health, won’t simply disappear unless and until our society comes to terms with both. The authors acknowledge that in 2017, when they began their research, they “did not know then what the consequences of President Trump’s era would be.” This report, the first and most comprehensive of its kind, provides us with the disturbing answer: The consequences were horrific, but they were also entirely predictable.