Republican attacks slowed, but did not stop, confirmation of Rep. Deb Haaland as interior secretary 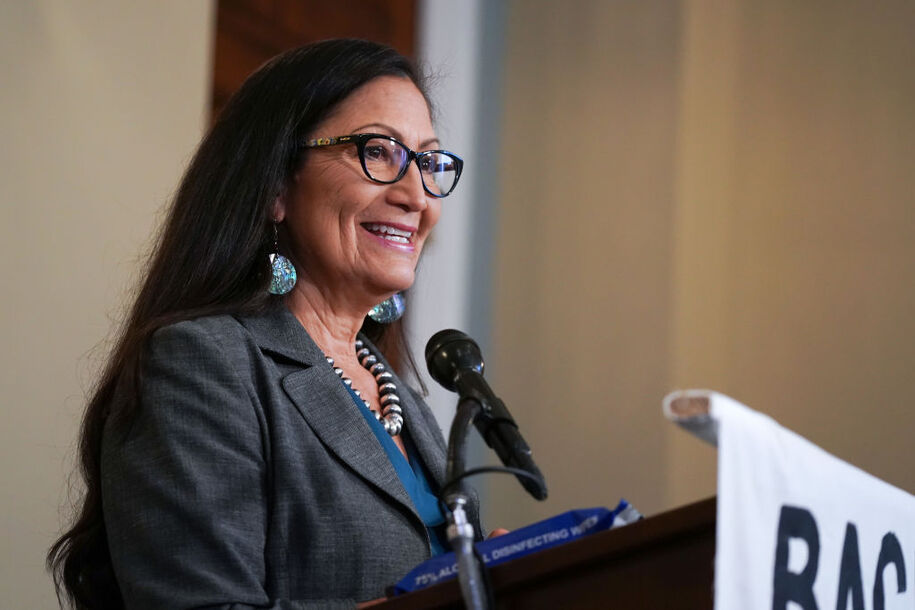 Rep. Deb Haaland finally made it past Senate Republicans’ special woman-of-color blockade on Biden nominees and was confirmed Monday as secretary of the interior by a vote of 51-40. Haaland, a citizen of the Laguna Pueblo, is the first Native American Cabinet member.

Haaland also represents a policy divergence in a role that has too often represented large landowners and fossil fuel companies. Of her motivation to want to lead the Interior Department, she has said, “It’s difficult to not feel obligated to protect this land, and I feel that every Indigenous person in this country understands that.” She comes to the job committed to fight climate change.

At her confirmation hearings, Republicans repeatedly attacked Haaland, trying in particular to trap her with questions about “science,” by which they meant “supporting extensive fossil fuel use.” But even before the confirmation hearings, two Republican senators vowed to block her nomination to whatever extent they could—in the end, slowing it down but not stopping it—because she was so “radical,” a word Sens. Steve Daines and John Barrasso used repeatedly to describe Haaland.

As former Sens. Mark Udall and Tom Udall pointed out in a USA Today op-ed, there was more than a hint of dog whistle there: “Were either of us the nominee to lead the Interior Department, we doubt that anyone would be threatening to hold up the nomination or wage a scorched earth campaign warning about ‘radical’ ideas.” And Haaland was far from the only woman of color to face Republican opposition more intense than the white men among Biden’s nominees.

Haaland was equal to meeting those racist, sexist, partisan challenges, though. As she tweeted when her nomination was announced, she would be “fierce for all of us, our planet, and all of our protected land.” And, in the face of inane and insulting Republican questions, calm and quick-witted. When Barrasso confronted her with a past tweet about Republicans not believing in science, Haaland carefully noted that “If you’re a doctor, I would assume that you believe in science.” When Daines wanted to know why she supported ongoing protections for grizzly bears, Haaland replied, “Senator, I believe I was caring about the bears.”

Haaland made clear throughout her confirmation process that she would be promoting the policies of the president she’ll serve, saying, in response to a question on fracking bans, “If I am confirmed as secretary, I would be serving at the pleasure of the President and it would be his agenda that I would move forward.” Having people to Biden’s left on his Cabinet, though, is an extremely good thing. Too often Democrats surround themselves with advisers who urge them to be overly cautious. Having bold counsel seated at the table will lead to better policy.

As Haaland said, “The historic nature of my confirmation is not lost on me, but I will say, it is not about me. Rather, I hope this nomination would be an inspiration for Americans—moving forward together as one nation and creating opportunities for all of us.”