Sen. Ron Johnson tries to distance himself from his racist commentary about insurrectionists vs. BLM 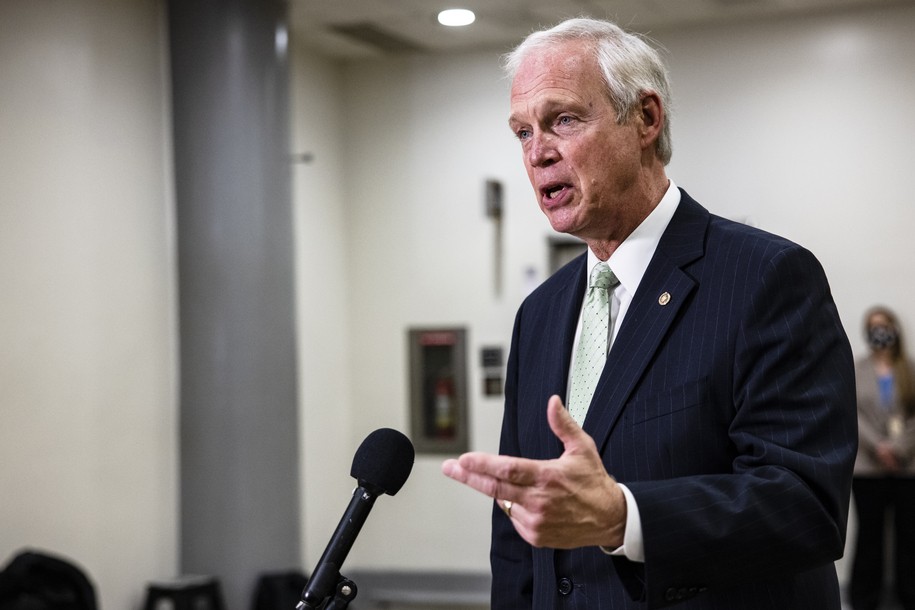 Last Thursday, Sen. Ron Johnson of Wisconsin went on right-wing radio talk show host Joe Pagliarulo’s show to discuss whatever fatuous cancel culture trope conservatives talk about these days in lieu of actual policy. During his appearance, Johnson explained how the insurgency at the Capitol building on Jan. 6 didn’t “concern” him the way it might have if, say, it had been a Black Lives Matter or antifa protest. While this wasn’t a new thought from the right-wing blahblahsphere in our country, the blatant racism of that statement—with no attempt at pretending there isn’t a white supremacist double standard at work here—was newsworthy. In an interview, Rep. Pramila Jayapal explained to CNN: “This is what the Republican Party has become. A clear embrace of white supremacist terrorist groups, and that is apparently what the Republican Party is today.”

On Monday, Johnson, who was feeling the blowback for his most recent racism, went back onto radio to give his side of the story. The Associated Press reports that Johnson went on WISN-AM and explained that not only was he not racist, his racist statement wasn’t even racist. “It has nothing to do with race. It has everything to do with riots. I completely did not anticipate that anybody could interpret what I said as racist. It’s not.” Forget about the revisionism being done here on the clear double standard in our country’s response to racial justice protests versus white people armed with guns and angry about wearing masks for public health.

Johnson and the rest of his political party are trying very hard to change the history of what happened this past election. This is happening for a few reasons, not least of which is that elected officials in the Republican Party are guilty of participating in the day’s events that led up the riots at the Capitol building. In the weeks after the insurgency, many top GOP officials attempted to rewrite the narrative of what happened on Jan. 6 as a “hoax.” The harsh reality of there being only white supremacists, militia members, and MAGA monsters involved, who videotaped, live-streamed, and self-incriminated made that particular conspiracy theory claim hard for even the conservative reality-free conspiracy zone to sustain. This doesn’t mean that there aren’t some who will continue to fall back on the explanation that it’s all a left-wing hoax sword—as we have seen in the past from racist Republican operatives.

Johnson’s weak-sauce proof that he wasn’t being racist is that the Black lives Matter movement has white people in it. That’s it. As Johnson explained Monday morning,  “Remember those leftist activists, those protesters, that some of them turned into riots, a lot of them are white. So there’s no racism involved in this at all.” You see, you cannot be a racist if while you are saying that Black people and political movements demanding civil rights equality and protections are terrifying to you in comparison to armed white rebellion, there are some white people in that civil rights movement.

When Rep. Pramila Jayapal and others called out Johnson as someone embracing white supremacist values and ideologies, she was being diplomatic. Republican representative without a country Adam Kinzinger told CNN’s Kate Bolduan that Johnson’s claims were “ludicrous” and tried to remind the audience that “Black Lives Matter has not stormed and occupied the Capitol.”

Let’s once again try and understand Johnson’s defense of this most indefensible statement:

“I’m also criticized because I’ve made the comment that on January 6, I never felt threatened, because I didn’t. And mainly because I knew that even though those thousands of people that are there marching to the Capitol were trying to pressure people like me to vote the way they want me to vote. I knew those are people that love this country, that truly respect law enforcement, would never do anything to break a law, and so I wasn’t concerned.”

Johnson’s defense here is that because there are many white Americans who support the Black Lives Matter movement, his statements about being more afraid of a make-believe protest involving racial justice versus the very real life Capitol insurgency and occupation on Jan. 6 by predominantly white and mostly racist MAGA supporters isn’t a racist statement. If we are to take on Johnson’s logic here, this—theoretical mind you—protest involving a movement that looks to achieve real equality for people of color, which was birthed out of a very well-documented need to protect Black lives from physical abuse and murder resulting from our country’s systemically flawed racist law enforcement system, is more of a “concern” to Johnson than the documented attempt by hundreds of fake patriots to overthrow the democratic results of our election.

MSNBC had Soledad O’Brien and former RNC Chairman Michael Steele on to discuss the matter. O’Brien explained what we all understand: that Johnson is “straight-up racist.” Steele attempted to explain his continuing presence in the Republican Party, saying he was “trying to clear out the idiots,” in his party. Asked again to explain his continued membership in a political party so clearly uninterested in Black people’s lives and opinions, Steele said: “What else can you do? Look, because this is where I’ve been for 46 years and I don’t get to step off that easily. It’s a tough journey. It’s in a tough place now. There are a lot of us, like Adam Kinzinger and others trying to fight for solid ground and you have Ron Johnsons that stand in the way.” Right now we have counted literally two Republicans who are fighting for “solid ground.” You are men without a home.