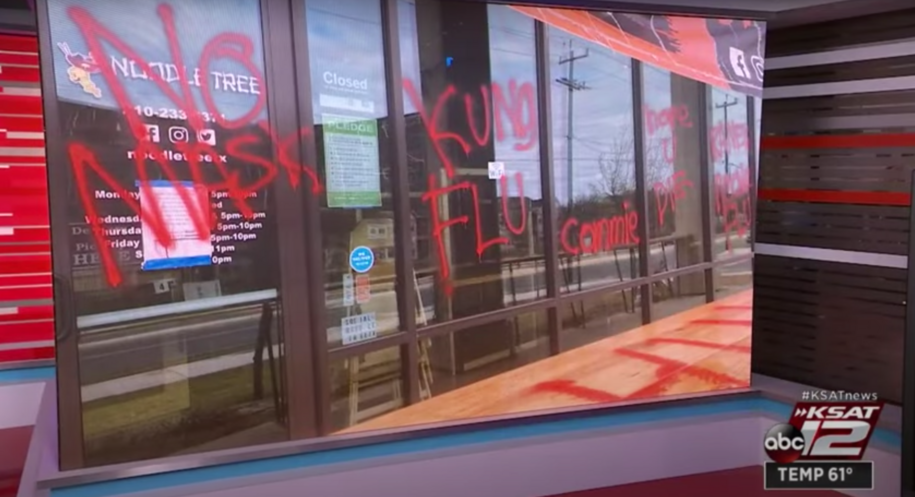 Despite the increasing awareness, hate crimes directed against Asian Americans have continued to rise amid the pandemic. Asian Americans have not only been physically assaulted and verbally abused, but businesses they own have been vandalized and destroyed by racist ill-informed individuals who blame them for the virus.

In a recent incident, a Texas ramen restaurant was covered in xenophobic graffiti after the owner spoke out against Texas Gov. Greg Abbott’s decision to lift all coronavirus restrictions in the state, including wearing masks. Photos of the vandalism depicted phrases written on the windows including “no mask,” “kung flu,” “commie,” “hope u die” and “ramen noodle flu.”

According to ABC affiliate KSAT 12, Mike Nguyen, the owner, found the red graffiti on the windows of his San Antonio-based restaurant, Noodle Tree, on Sunday. The restaurant’s Facebook page noted a delayed opening to address the incident.

Nguyen noted while he was prepared for hateful comments on social media following his interview, he didn’t expect this form of hate. “I’m still a little shocked that this would actually happen,” Nguyen told the San Antonio Express-News Sunday. “When I got here, that’s when it actually sunk in.”

According to the San Antonio Current, Nguyen has received a number of death threats following his interview. Despite this, he wrote on Facebook that he will not back down from his comments. “Our governor has betrayed us, but that doesn’t mean we have to follow him blindly,” Nguyen wrote. “Today we show the whole country that we aren’t a joke that the governor has made us out to be.”

Nguyen was featured on CNN with a handful of other restaurant owners who shared their opinion of Texas lifting mask mandates on Wednesday. He told CNN that amid the pandemic, his restaurant was forced to close for nearly six months causing an issue in his finances. He then reopened Noodle Tree with COVID-19 safety protocols in place.

He also shared his diagnosis of Lymphoma and called Abbott’s decision to remove the state’s mask mandate “selfish” and “cowardly.”  “Greg Abbott doesn’t have the Texas people’s interest in mind. He cares about himself at this point,” Nguyen told CNN. “I was almost devastated when I heard the news just because this year has been tough on me. Not only dealing with the stress of my sickness, but also dealing with the stress that comes with COVID and the anxiety that comes with that.”

Abbott announced the state will no longer have a mask mandate and COVID-19 restrictions on businesses would be limited on March 2. While businesses have the ability to maintain mask requirements in their establishments, the governor’s order prevents local governments from implementing or keeping their own mask mandates. Restaurants and businesses also now have the ability to operate at full capacity instead of partial as they were earlier to enforce social distancing efforts.

During the interview, Nguyen also highlighted the additional risks one carried as an Asian American business owner. “We have seen a lot of attacks on Asian-Americans and that’s a huge concern for me because I have a bullseye on my back,” Nguyen, who identifies as half Vietnamese and half French said. “Those (mask enforcement) confrontations open up the opportunity.”

According to analysis released by the Center for the Study of Hate and Extremism, while hate crimes in the U.S.’s 16 largest cities decreased overall by 7% in 2020, those targeting Asian folks rose by nearly 150%. Community members and organizers are calling for more action to be taken to protect AAPI community members.

According to Myra Dumapias, a lead community organizer with Asian Americans and Pacific Islanders for Justice San Antonio, the vandalism at Noodle Tree is not the first anti-Asian hate incident to occur recently in San Antonio. She noted that last year, an airplane flew over the city with a banner encouraging people to use discriminatory names for the virus, the San Antonio Express-News reported. “When something happens like this, we have to speak up,” she said. “This is the time to get together and say you can’t do that to our community as a whole.”

After photos of the hate crime went viral on social media, dozens of people gathered together in support and to help clean up the graffiti, the San Antonio Express-News reported. Additionally, the incident garnered community members to show up in big numbers to buy food resulting in Nguyen almost running out by the evening.

The San Antonio Police Department is investigating the vandalism of the Noodle Tree restaurant. Now more than ever we need to show our support for the AAPI community. We cannot stand for racism and hate.