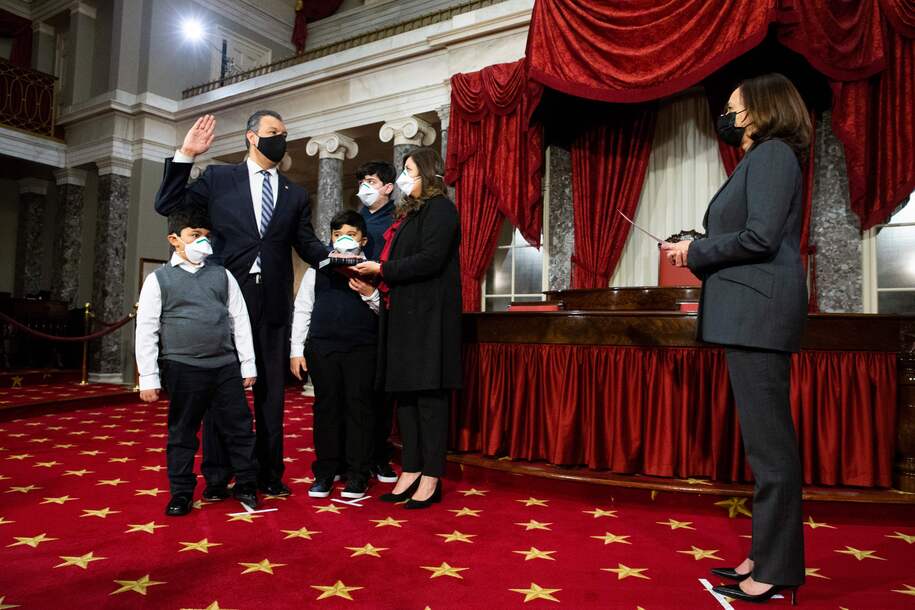 United States Sen. Alex Padilla delivered his inaugural speech from the Senate chamber’s floor on Monday, in remarks that opened with his immigrant family’s story and closed with an urgent call for ongoing “bold action” to preserve the American Dream for families struggling today. Los Angeles Daily News reports that Padilla, the first Latino to represent California in the U.S. Senate, delivered his remarks while at times “holding back tears.”

“I stand before you humbled and inspired by this moment in our nation’s history,” Padilla said. “As the senator from the most populous and most diverse state in the nation—and as the first Latino senator from California—let me just say: what a great country this is. My name is Alex Padilla y soy el hijo de Santos y Lupe Padilla. I am the son of Santos and Lupe Padilla.”

“My parents immigrated to California from Mexico in the 1960s in search of a better life,” Padilla said in the speech. “They arrived from different parts of Mexico with little formal education, but a tremendous work ethic and big dreams.” His dad, Santos, worked as a short-order cook for four decades. “For those same 40 years, my mom worked tirelessly as a housekeeper.”

“Think about that: In one generation our family has gone from being immigrant cooks and house cleaners to serving in the United States Senate,” he continued. “That’s the California Dream—that’s the American Dream … I think about my parents often. And I think about all the hard-working people in our state and in our nation who are hurting right now. I rise today on their behalf.”

Padilla remarked on two Americas and two Californias, “[o]ne for families who struggle to pay their rent and make ends meet, who struggle just to keep hope alive. And one for those who can afford to work from home or from a second home, who can more easily weather this storm.”

Among Padilla’s first votes was to pass into law novel coronavirus pandemic relief, which no Republican in either chamber supported. “The American Rescue Plan provides the lifeline for American families, workers, and businesses to survive—what we all hope—are the last months of this crisis,” he said. “It is one of the most transformational and progressive pieces of legislation in our history that will cut child poverty in half—including for half a million children in California. But our work is far from over.”

Padilla’s first bill as U.S. senator from California is a critical piece of legislation putting the millions of people who toil as essential workers during the pandemic but lack legal status onto a path to citizenship. The bill, co-introduced with California Rep. Ted Lieu, Texas Rep. Joaquin Castro, and Massachusetts U.S. Sen. Elizabeth Warren, could affect up to 5 million workers.

In his remarks this week, Padilla said “we cannot in good conscience praise them as ‘essential workers’ in one breath, while denying them essential human dignity with the next.”

“These are the workers we have all depended on during this pandemic,” he said. “Millions have offered tremendous gestures and thanks for their heroism and hard work. Let’s be honest. Many of these very workers woke up before dawn today and took the bus to work so others could ‘zoom to work’ from the comfort of their homes. These essential workers take care of our loved ones. They keep the supply chain moving. They grow and harvest our food, stock the shelves at grocery stores, and even deliver it to our doors. They risk their lives so others can stay safer at home.”

While Padilla’s legislation, the Citizenship for Essential Workers Act, does not appear to have a vote at the moment, a bill putting undocumented farmworkers on a path to legal status is set to get a vote in the U.S. House on Thursday. The chamber passed the Farm Workforce Modernization Act by a wide 260 to 165 margin last year, but it was stalled by Senate Republicans. It was the first time the House had passed such protections in many years. The moral imperative to protect farmworkers has only grown since the pandemic.

Farm workers put food on our tables every day. It is time to provide them with a pathway to citizenship. 📞 Call your representative at (202) 224-3121 💌 Email them here: https://t.co/rLxpc0o4aN Tell them to support the Farm Workforce Modernization Act #WeFeedYou #WeAreHome pic.twitter.com/QFLYgxTXAP

“Yes, dignity, respect, and a pathway to citizenship for essential workers who have earned it is personal for me, but it is also in the best interest of our nation,” Padilla continued in his floor speech. “They are more than paying their fair share. They are deemed essential by the federal government for good reason. And they have earned the rights and responsibilities of citizenship. We cannot allow the American Dream to become the greatest casualty of this pandemic. Relief and recovery must be for everyone.”