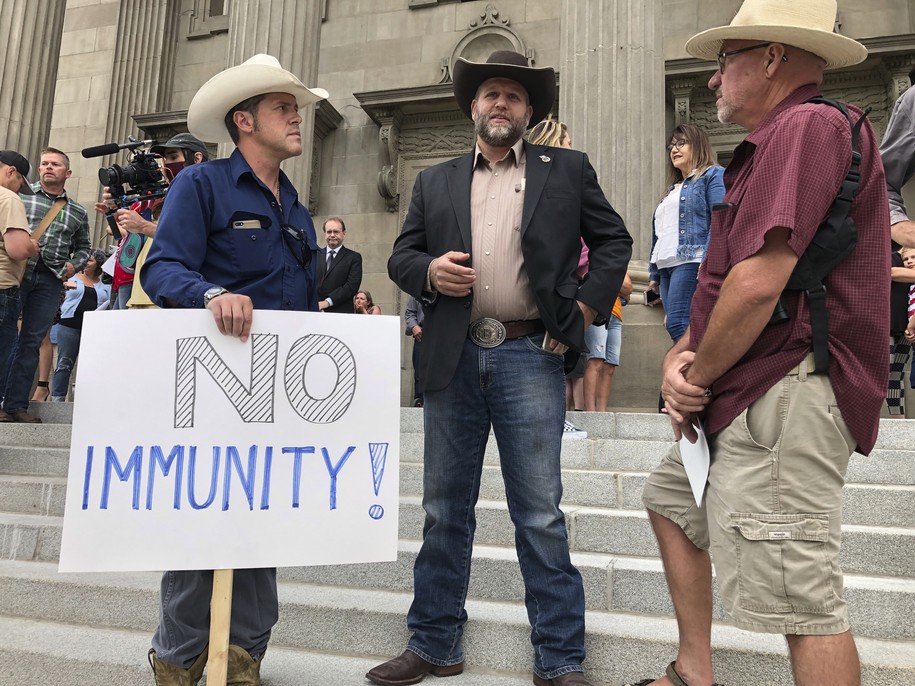 Ammon Bundy is nothing if not consistent. When the Idaho-based leader of the anti-public health measure “People’s Rights” network says he won’t be forced to wear a mask, he apparently means it—even if that leads him to miss his trial on trespassing charges at the Idaho Statehouse last year, leading to a warrant for his arrest and his subsequent imprisonment.

That’s what happened Monday in Boise, when Bundy was scheduled to appear in court on charges arising from his arrest last August for disrupting a legislative committee hearing and refusing to leave: Bundy and his codefendant, Aaron Schmidt of Boise, defied an Idaho Supreme Court order by refusing to put on masks as they entered the courthouse, and instead stood outside and protested. When the judge then issued arrest warrants for the men for skipping out on their trial, deputies went outside and eventually arrested them.

According to the Idaho Statesman, the men were first asked by the deputies if they wished to surrender voluntarily. They refused and laid down on the ground, and a crowd of supporters locked arms and surrounded them to prevent their arrest. Eventually deputies were able to reach the men and began hauling them inside. A melee broke out among the Bundy supporters and the deputies, with a 69-year-old Nampa man arrested for assaulting an officer, and a 32-year-old man arrested for obstruction.

Both Bundy and Schmidt were booked into Ada County Jail, and now face additional misdemeanor charges of failure to appear in court.

According to a supporter apparently in contact with him, Bundy also has refused to cooperate with the booking process. As a result, the supporter claims he was denied normal privileges and was being held in a cold cell.

The supporters who came to the courthouse Monday—about two dozen of them—shouted out misinformation and conspiracy theories about COVID-19, while carrying signs with such slogans as “Ammon Stands For Truth.” They dispersed after the arrests.

Bundy was arrested twice in two days last August—first for invading and disrupting a legislative hearing on COVID-19 measures, which earned him a yearlong ban from the Statehouse; then again the next day, when he entered Senate chambers in spite of the ban and was again handcuffed and escorted out.

After the arrests, Bundy—who is representing himself in the criminal case—claimed to Judge David Manweiler that his actions were legal, and that the state lacks the legal standing necessary to charge him with a crime. Bundy also filed a raft of subpoenas to officials, bystanders, and observers who were present at the Statehouse during the arrests, including reporter Keith Ridler of the Associated Press, who photographed the incidents.

The AP contested the subpoena and on Monday, Manweiler agreed, saying Bundy’s subpoena failed the three criteria of the reporter’s privilege test.

Bundy announced a far-right populist resistance to COVID-19-related shutdown measures shortly after they were instituted last year, built on conspiracy theories and bogus “constitutionalist” interpretations of state law. It included attempts at intimidating health boards in Idaho and confronting police officers who enforced the measures at their homes.

Eventually, it produced a kind of preview of the Jan. 6 Capitol insurrection later in August in which the “People’s Rights” army and other Bundy supporters broke into the chambers of the Statehouse, shoving their way past state troopers, pounding on doors, shouting and breaking doors and windows along the way, and then invading committee hearing rooms. But not only was no one arrested, state officials decided to accommodate them. It starkly contrasted with the scene a few years ago, when peaceful protesters seeking equal rights for LGBTQ people were arrested en masse for standing silently in the halls of the building.

Since then, Bundy has been primarily organizing the “People’s Rights” network as a far-right resistance organization built, once again, on false information and conspiracy theories. In recent months, Bundy has been touring the interior Western states and building support for the network.