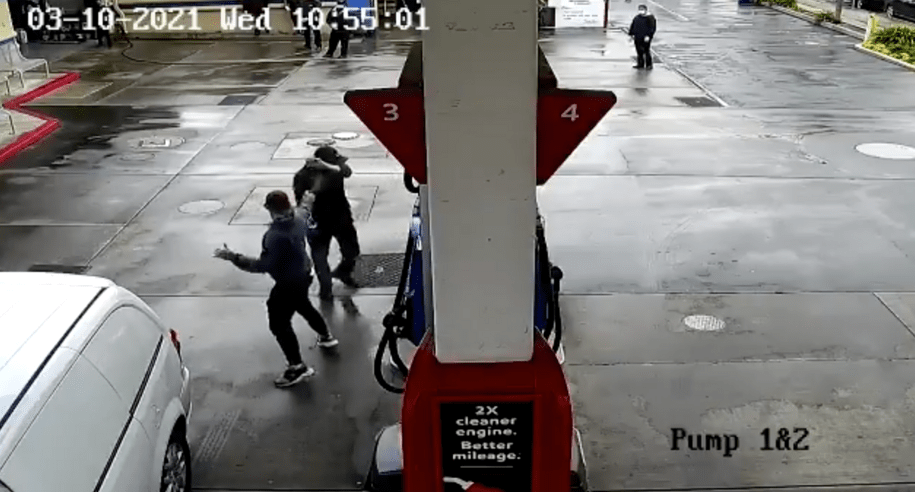 Crimes against Asian Americans are at an all-time high, as every day another incident is reported in which an Asian American is the target of identity-based hate. An analysis found that while crimes in the United States’ 16 largest cities decreased overall by 7% in 2020, those targeting Asian Americans rose by nearly 150%.

Incidents all over the U.S. have been reported and recorded on social media, especially in California. The Golden State has seen a steady increase in reported crimes with anti-Asian bias, and with the number of crimes that go underreported, the increase is likely worse than it appears. In a recent incident, a man was caught on camera going on a racist tirade against an Asian American gas station owner. Not only did the man yell racist language, but he also pepper-sprayed the owner who was hospitalized as a result, ABC News reported.

The incident occurred on March 11 at a gas station in Oakland, California. Footage shared by ABC News reporter Dion Lim quickly went viral Monday in which a racist customer can be seen verbally attacking the gas station owner over trying to pay for gas by dropping piles of quarters onto the cashier’s counter.

When Cwell noticed the man getting something in his pocket he grabbed some cleaning spray to protect himself. But it was too late. Surveillance video shows the man spraying Cwell w/what looks like pepper spray. Cwell had to go to the ER. https://t.co/pD3j5HV3Fs pic.twitter.com/wivtxz2rTC

“My staff, she’s like, ‘well, wait, hold on there,” Cwell, the gas station owner, who wished to only be identified by his first name, said. “You kind of have to take this to the bank because I can’t fit this all in the till.”

Cwell tried to defuse the situation by attempting to talk to the man about his staff’s issue with him dropping the quarters when the man went off on a racist rant. “He just started mouthing off… ‘You should go back to China,’ like that. We were just bursting out laughing because it was so unbelievable.”

Cwell told ABC News that although he has owned the gas station for almost 20 years and is used to dealing with all kinds of customers, this customer was different. After the man threatened to come back again, Cwell followed him outside to capture his license plate, when the man began yelling racial slurs and hurling other abusive language.

The next part of the encounter became more physical. While it was not recorded, the man allegedly attempted to drive his car over Cwell. “He ends up reversing his car at me. I took it as an assault,” Cwell told ABC News

At one point, Cwell noticed the man getting something out of his pocket, so he grabbed cleaning spray to protect himself but was unable to make use of it before the man pepper-sprayed him. Security footage captured the attack. “The guy had pulled out his pepper spray and he had shot my face, arms. I ended up going to the ER to get taken care of,” Cwell said.

Gas station staff called Oakland police to report the attack, and officials arrived at the scene shortly thereafter. Cwell noted he plans to press charges and hopes his experience helps spread awareness about the rise of crimes against Asian Americans.

“I totally appreciate that you let me share my story because this has got to stop. I hope this brings awareness that everybody goes through the same stuff. We just have to understand that and understand that we all have to work together,” Cwell told ABC News.

The latest incident follows multiple attacks on elderly Asian Americans in California and Oakland, specifically. Over the last few months, the Asian American community in Oakland has suffered a number of attacks, especially against the community’s elderly. While hundreds of volunteers are working to make the community safer, there are numerous ways we can help the AAPI community even if we don’t reside in California ourselves. We must not only raise awareness but call on our members of Congress and hold our representatives accountable for what actions they are taking to protect the community and ensure safety. This violence must stop and cannot be tolerated.