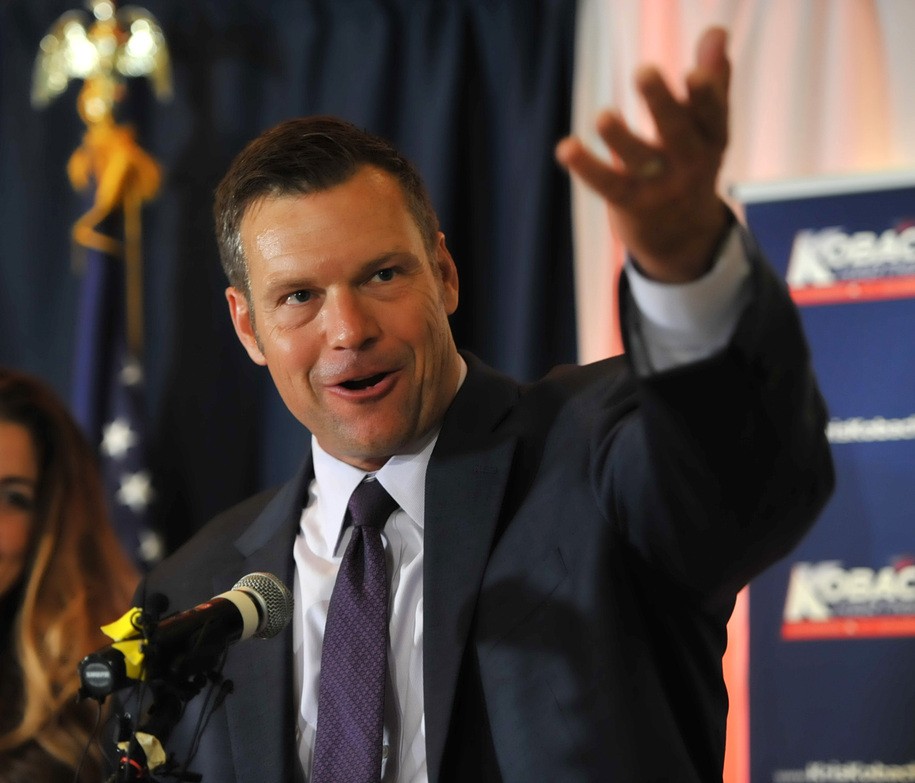 Former Kansas secretary of state, “birther,” and xenophobic voter suppression person Kris Kobach is in the news again. This time it is his most recent endeavor to make money off of the fear of Kansas denizens. Back in October—along with his Wichita-based business partner, CEO of MoJack Distributors Daniel Drake—Kobach pitched legislators in Topeka two magical COVID-19 sanitizer machines. You didn’t know this technology exists? Well, it doesn’t. But in October, Drake and Kobach told Kansas officials that their “coronavirus-killing sanitation company, Sarus Systems,” could be used to sanitize emergency equipment as well as clear out COVID-19 from state building rooms. The system was developed out of MoJack’s “Scent Crusher,” which is made for hunters and that has “Ozone Activated Technology which effectively eliminates odors on your gear.” Drake and Kobach claimed that this very same ozone tech could kill up to 99.8% of COVID-19 in a room.

During his visit, Kobach told the Topeka Capital-Journal: “I’m very pleased it’s a Kansas company leading this new cutting-edge technology, and I love to see not only Kansas facilities protected by this Kansas technology, but eventually the rest of this country, too.” The grift sales pitch was that for $15,000, you could purchase one of these machines and clean an up to 1,250-square-foot room in 90 minutes. Drake told legislators that this one-time purchase paid for itself since COVID-19 cleaning services being used at the time could cost upwards of $5,000 for a single cleaning session. He showed legislators a third-party lab test done by MRIGlobal. Drake and Kobach pitched it as a way to help keep the state capitol safe as well as law enforcement buildings that must traffic in lots of people every day. Sounds great and useful. But this is Kris Kobach we’re talking about, and the Kansas Reflector decided to investigate the integrity of the claims Sarus Systems was making. Spoiler alert: This is a story about Kris Kobach.

First, the Reflector got their hands on an unredacted copy of the study MRIGlobal did for Sarus Systems. An important note here is that MRIGlobal is a legitimate testing operation, but they are only testing products and things according to the parameters laid out by their clients. In this case it’s according to Drake and Sarus Systems. As the Reflector reports, experts looked at the study and found it profoundly lacking in the important ways that would actually support Drake and Kobach’s statements about their machine’s performance.

Also important, as the investigation pointed out, is the incredible (and still unexplained) difference in price between Drake’s Scent Crusher tech, which retails at $349.99, versus the $15,000 price tag for Kobach and Drake’s Sarus Systems devices. Drake didn’t really address the price difference, but told the Reflector that this magical system used “several extra processes to further atomize and accelerate the ability to eliminate virus in a larger everyday setting.” Of course, everything Drake has said in regards to this COVID-19 sanitizing system has been suspect upon even the slightest scratch of the surface. Drake has said he came up with the idea after working with the Los Angeles Emergency Management Department (LAEMD), which asked about it. Of course, the department’s administrative and finance division chief, Ellen Linaac, told the Reflector she had no idea what he was talking about and there were no records of LAEMD ever working with Drake or with any of his companies’ products.

Finally, Drake reportedly told Kansas legislators in Topeka in October this sanitizing product that he was producing in China was on the precipice of allowing him to bring back “several hundred jobs” to Wichita, Kansas. While there is still no evidence that even a single job is on the horizon, the Reflector wasn’t able to find a business person or economist who thought there was a chance that, even if this product worked the way it claimed—which there is still no evidence it does—there would be a remotely cost-effective way to bring “several hundred” jobs stateside and continue to produce a device that might be moot in a few months.

This isn’t the first time, or the second time, or the millionth time that Kobach’s claims about anything have been debunked. His tenure in office in Kansas was marked by incompetence and the convenient mismanagement of corruption. Kobach isn’t unique for a Republican official these days. His career is sadly marred by the hackneyed waste of public resources, both federal and state, in the service of throwing obstacles in the way of democracy while also trying to enrich himself. In October, Kobach told investigators exactly why he was there: “A lot of state and local governments are receiving these pots of money, and they’re not sure what to do with it. This product they developed in Wichita is right on point.”