Amazon touts high pay for warehouse workers, but $15 isn’t all that, this week in the war on workers 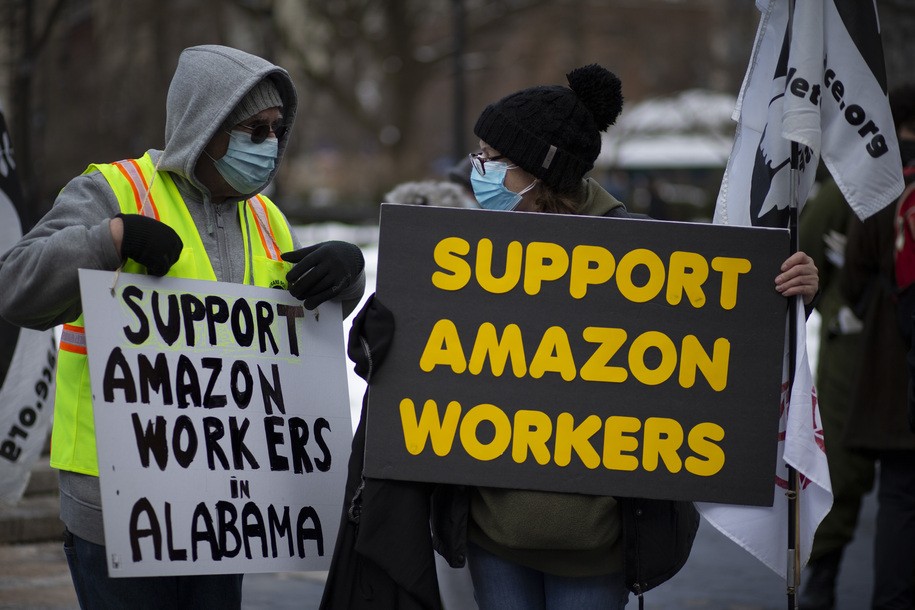 As its workers in Bessemer, Alabama, seek to unionize, Amazon keeps touting its $15 an hour pay—more than double the federal minimum wage, which applies in Alabama. But it turns out that’s not such a great thing to brag about in that area.

“The most recent figure for the median wage in greater Birmingham, a metropolitan area of roughly one million people that includes Bessemer, was nearly $3 above Amazon’s pay there, according to the Bureau of Labor Statistics,” The New York Times reports. Jennifer Bates, an Amazon worker who earned more in a previous job, pointed to Amazon’s support for a $15 federal minimum wage, saying: “It looks to me like Amazon is admitting it’s only paying a minimum wage, and this is not a minimum-wage job.”

But “high” pay isn’t the only way Amazon tries to keep unions out. The company has a history of surveilling, threatening, and retaliating against worker activists.

● UNITE HERE is pressing Massachusetts hotels to commit to rehiring furloughed workers as business comes back:

Esther Montanez, a housekeeper at the Hilton Boston Back Bay, said she hasn’t heard anything about getting rehired. Montanez and her union coworkers have been pressing the hotel to commit to rehiring people once there’s enough work, including trying to present managers with a petition earlier this week, but they refused to meet with the workers, she said. Montanez, a 31-year-old single mother of a 5-year-old, has been getting by on unemployment but no longer has health insurance.

● Two alternative takes on Markos’ recent critique of the PRO Act: Three reasons why the PRO Act won’t destroy freelancing or the gig economy, by the Economic Policy Institute’s Eve Tahmincioglu, and The PRO Act and the ABC Test, from the Authors Guild.

● Chartered for profit: The hidden world of charter schools operated for financial gain.

● Erik Loomis: How COVID ripped off the neoliberal band-aid.