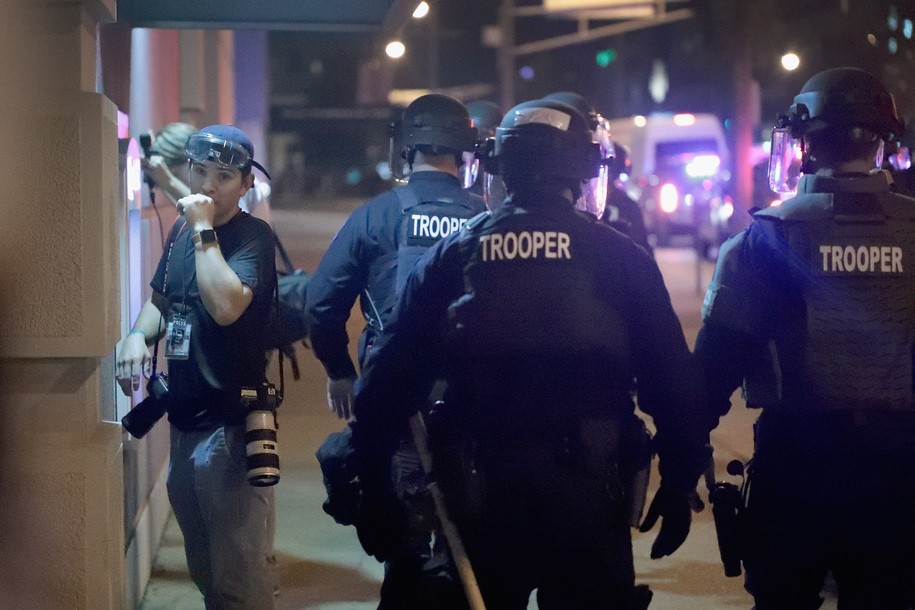 In November 2018, the Department of Justice announced that four St. Louis Metropolitan Police Department officers had been indicted by a federal grand jury in connection with an assault on undercover Black St. Louis police detective Luther Hall. The assault on Hall, a 22-year veteran of the force, took place during Black Lives Matter protests on Sept. 17, 2017. Officers Dustin Boone, Bailey Colletta, Randy Hays, and Christopher Myers were charged with four counts of “willfully violating” Hall’s constitutional rights. Not only did the four officers brutalize Hall, who suffered long-term injuries, but text messages preceding the protests reportedly showed the four officers being enthusiastic about the prospect of violating protesters’ civil rights. The officers also reportedly worked diligently to obstruct justice after they realized that Hall was a law enforcement officer, including destroying his phone.

In September of 2019, Hall filed a civil rights lawsuit against the officers as well as Mayor Lyda Krewson, Lt. Col. Lawrence O’Toole, and recently promoted Sgt. Joseph Marcantano. Hall’s lawsuit not only alleged that Krewson made a glib remark about Hall’s “cute face” being damaged by police, but that Marcantano—although he was involved in the assault and subsequent attempts at a cover-up—was not only able to escape any punishment, he was promoted. In February of 2021, St. Louis officials completed a $5 million settlement with Hall. That’s another bill taxpayers will foot for an unaccountable law enforcement apparatus that frequently steals money from citizens and from education services to fill out their budgets.

On Sept. 15, 2017, St. Louis police officer Jason Stockley was acquitted of first-degree murder charges in the death of Anthony Lamar Smith. The acquittal, even with video evidence of Stockley saying he was “going to kill this [expletive deleted], don’t you know it” before shooting Smith five times following a chase, touched off protests for racial justice. More than 80 people were arrested by St. Louis police during the Sept. 17, 2017 BLM protests. (Unlike the Jan. 6, 2021 insurrection of the Capitol building in Washington, D.C., on the day that our 2020 national elections were being certified by the legislative branch of the U.S. government.) Videos of the BLM protests show that Hall was not the only protester subject to police violence that day.

According to KSDK-5, the city of St. Louis has 45 days to pay Hall the settlement money. This settlement only includes Krewson, O’Toole, and Marcantano. The four other officers are still on the hook for Hall’s civil claim against them. KMOV-4 reports that of the four officers indicted, Hayes and Colletta have already pleaded guilty to using “unreasonable and excessive force” against Hall and “lying to a grand jury” as part of a cover-up attempt, respectively. Boone and Myers have pleaded not guilty and still await trial along with a newly indicted officer Steven Korte. Korte was indicted based on statements reportedly made by Hayes. Korte’s defense, unlike the other two officers, is that he was nowhere near the incident that took place between Hall and the other officers.

All three men “face a charge of deprivation of rights under color of law.” Myers faces an additional charge of destruction of evidence for his part in trying to destroy Hall’s cell phone, while Boone and Korte face charges of lying to federal investigators. Last week, the trial of the three men began after a slow jury selection took place. Part of the delay came after prosecutors accused the defense team of striking three of the only four Black prospective jurors, saying these moves were racially motivated. A judge agreed on the dismissal of one of the jurors being racially motivated and returned them to the jury pool.

This week prosecutors and defense lawyers began calling witnesses. The defense team for Boone and Myers are throwing a lot of things at the wall, from “It was everybody else’s fault” to “It’s mostly officer Hayes’ fault as he has already pled guilty.” The St. Louis Post-Dispatch reports that of the many excuses being made by the defense, ill-fitting riot gear and the fact that police officers didn’t realize there were undercover officers in the protest crowd are a couple that really shine. The latter defense blames Hall himself for his own beating. The trial is to conclude by next week.

While the fundamental problem here is that law enforcement cannot just beat people up no matter how badly the officers feel about things, the hubris it takes to blame a Black 22-year-veteran officer for the violent actions of some bad white officers may be the most clear example of how the thin blue line, when push comes to shove, is really a thin white one.