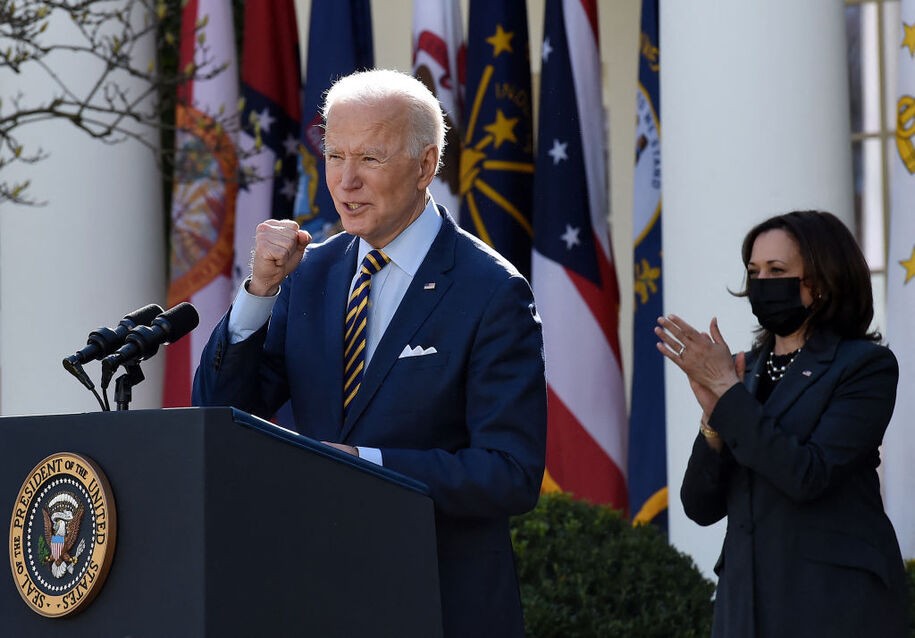 When progressive activist Melissa Byrne wanted to push President-elect Joe Biden on cancelling student debt, she bought full-page ads in the print edition of Delaware’s The News Journal, which was delivered daily to Biden’s home during the transition.

“Good Morning President-elect Biden,” the ad began in giant bold type. “Hope you’ll take a few minutes this morning to meet a few of the 44 million Americans struggling with student loan debt. We need you to help us build back better by cancelling all federal student loan debt.”

Byrne told The New York Times that she expected some blowback from the incoming administration but instead found herself welcomed into the fold. Incoming White House chief of staff Ron Klain encouraged her to keep pushing and even invited Byrne to Zoom meetings with the transition team.

“We just kept being able to have people at the table,” she told The Times. “That showed me that we could do cool things like sit-ins and banner drops, but we could also be warm and fuzzy.”

Byrne’s activism didn’t yield immediate results, as evidenced by the uproar last month over Biden’s first pronouncement on student debt cancellation as president. Biden said he was open to canceling $10,000 in debt—a relative pittance—but not necessarily $50,000, the figure both Majority Leader Chuck Schumer and Sen. Elizabeth Warren of Massachusetts have been pushing. But the day after Biden’s response at a CNN town hall jumpstarted the student debt conversation, White House press secretary Jen Psaki said the West Wing was referring the issue to the Department of Justice, to review Biden’s authority on the matter and what he had the power to do through executive action.

In previous Democratic administrations, that referral might be seen as a dodge—a way for the administration to find its way to justifying what the president has already decided to do. In this administration, it might actually buy time for the White House to come out with a more aggressive stance on the issue than Biden held as a candidate or has even stated as president when first asked. In fact, on Thursday, the Education Department announced it was cancelling some $1 billion in debt for about 72,000 borrowers who were defrauded by for-profit colleges—a life-altering change for every one of those borrowers.

But the episode is less instructive as a matter of outcomes than it is as a matter of process and an examination of how exactly progressive activists can best influence the Biden White House and administration policy. Over and over again, the Biden White House has proven to be pleasantly surprisingly, from its progressive posture on Day One of the administration to the way Biden and his top lieutenants unapologetically pushed through one of the most liberal pieces of legislation in generations. This week, the hits just kept on coming, with Biden for the first time indicating he was open to reforming the filibuster so that it requires senators to actually occupy the Senate floor, and Psaki announcing the president supports the push for Washington, D.C. statehood.

As someone who both reported on and watched different progressive movements work to influence the Obama White House, I have been trying to get a handle on what moves Team Biden—what exactly can liberal activists do to push this administration? What I have concluded is that Biden is much less bothered by outside agitation than President Barack Obama was. The Obama White House was actually quite thin-skinned about criticism from the left. The movements that eventually notched some of the biggest wins during the Obama administration did so by mounting very persistent and highly visible pressure campaigns. Obama bristled at being heckled by LGBTQ activists at a Democratic fundraiser in 2010, just like he did when he was challenged by immigration activists at a speech to members of the National Council of La Raza in July of 2011. Later that year, climate activists linked arms to form a human chain, 2- to 3-people deep, around the White House. All of these actions were part of pressure campaigns that eventually bore fruit in terms of policy changes, but they also came at the price of enormous effort by grassroots activists—while Washington advocates who occasionally spoke out of turn could find themselves frozen out of gaining access to the White House.

The Biden White House seems to be taking the exact opposite tack—inviting activists and advocates alike into the conversation on the way to developing the policy. The entire organism is just much less adversarial in nature and also appears to produce more liberal outcomes. President Biden, for instance, has placed more than a half-dozen Warren allies and protégés in his administration, in positions where they could have a very real impact on policy and regulation of the financial industry. One of those appointees, Julie Morgan, is a senior adviser at the Education Department with an expertise in student loan debt, according to Mother Jones.

Julie Margetta Morgan, whom Warren calls “another data nerd” like herself, spent two years working in the Senate digging into the particulars of who carries student loan debt. What she discovered, Warren recalls, was “a job that called for oversight” of the Education Department’s administration of the loan program. They identified an obscure provision in the Higher Education Act called “defense to repayment,” and pushed the department to wipe out the loans of 30,000 students defrauded by for-profit colleges, which it did in 2015. Morgan is now focused on loan debt as a senior counsel at the Department of Education, which is in the midst of studying whether that same provision grants the department the authority to do the sort of mass debt cancellation Warren has advocated for.

The present push to cancel student debt and the early success regarding defrauded students is instructive on a couple of levels. First, change in the Biden administration seems to be much more about the conversation than the outside agitation (though I hasten to add that grassroots pressure is still essential to creating space for Democrats to move left). Second, meaningful change may not arrive in the form of one grand sweeping gesture, the way it did with the $1.9 trillion relief package. Policies that are deeply transformative for tens of thousands of people—or even hundreds of thousands or millions—for example, could come in smaller, less obvious bites and be spread out in regulatory changes across the administration.

Biden’s approach to filibuster reform is yet another example of how his understated approach could yield real wins even if they don’t unfold as we imagined they might. Instead of pushing to eliminate the filibuster outright, Biden said this week he wanted a return to “what it was supposed to be”—a talking filibuster like it was “when I first got to the Senate back in the old days.” It’s brilliant framing, actually, depriving Republicans of any number of talking points about the dangerously radical policies of the left. This change isn’t radical in Biden’s formulation. In fact, it’s anything but radical—it’s a reversion to form. Biden topped it all off with the most common-sense observation possible. “It’s almost getting to the point where democracy is having a hard time functioning,” he told ABC’s George Stephanopoulos. Indeed. Who’s talking common-sense reforms now, Republicans?

It’s still early. But by May of 2009, I and some of my close allies had already started to conclude the LGBTQ movement was in for a fight, and not primarily with Republicans. But just a couple months into the Biden administration, it feels like the progressive movement has a partner in the White House. Joe Biden is handling the presidency like a guy who has nothing to prove, which makes him both less reactionary and more persuadable. In some ways, that’s a function of his whiteness and, perhaps more specifically, not being the first Black man to occupy the Oval Office, which surely carried unimaginable pressures. But some of Biden’s relative ease might also be a function of age. Some people—though certainly not all—simply grow more comfortable in their skin the older they get.

Whatever the reasons, Biden appears to be a guy who both understands the transformational moment he’s living and is open to transformation. He’s living into the historical moment surrounding him, and that ultimately has the potential to yield the most progressive presidency in generations.