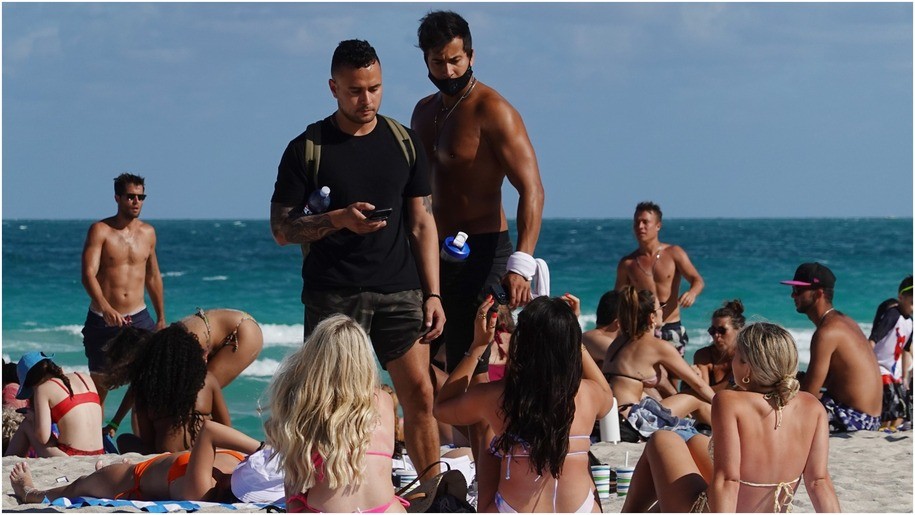 Miami Beach declared a 72-hour state of emergency on Saturday after viral video of bustling spring break crowds highlighted Gov. Ron DeSantis’ repeated failures to protect Florida residents during the coronavirus pandemic. Days before the curfew went into effect at 8 p.m., the governor made clear his priority in a Wall Street Journal op-ed on Thursday. “Lockdowns proved a huge boon to America’s corporate media, which primed its captive audience with fear and partisanship,” he wrote. “Everything the corporate press did regarding Covid coverage was inseparable from its yearslong obsession with attacking Donald Trump.”

So with the governor’s blatant denial of the pandemic and refusal to act preventatively to prepare for spring break crowds, officials responded with force that predictably targetted Black spring break crowds. The Miami Herald described police employing a “SWAT truck, pepper balls and sound cannons,” when mostly Black crowds filled the “world-famous Ocean Drive.” “The truck showed up and nobody knew why the truck was there,” Glendon Hall, chairman of Miami Beach’s Black Affairs Advisory Committee, told the newspaper. “When we tried to calm things down, that hyped things up.”

Stephen Hunter Johnson, who leads the Miami-Dade’s Black Affairs Advisory Committee, told the Miami Herald he was “very disappointed.” “I think when they’re young Black people [on South Beach], the response is, ‘Oh my God, we have to do something,’” Hunter Johnson said. Miami Beach Police Chief Richard Clements admitted that officers “felt threatened at the time” and the state’s barely-there rules on COVID-19 didn’t help. “It’s been a different environment this year,” he told the Miami Herald, also citing response following the death of George Floyd.

Social media users focused on how the governor’s response triggered the public health threat. Author Grant Stern tweeted: “The worst part about the triumphalism of Ron #DeathSantis is that he’s exporting COVID-19 infections all over the country so those cases aren’t in the Florida stats that he wants to (celebrate), which are hideously bad already.” Florida has had more than two million COVID-19 cases and 32,712 deaths, according to The New York Times. Attorney Aaron Parnas tweeted: “Ron DeSantis is at fault for the madness on Miami Beach. But for his dangerous rhetoric and incompetent leadership, we would not be here today. It is time to Remove Ron.”

Miami Beach Mayor Dan Gelber said in a video statement that his city is one of few that’s open nationally this spring break. “We’re getting an enormous amount of people here, more than we can handle,” he said. “Too many are coming really without the intention of following the rules, and the result has been a level of chaos and disorder that is just something more than we can endure.”

Miami Beach Mayor Dan Gelber: “We’re getting an enormous amount of people here, more than we can handle. Too many are coming really without the intention of following the rules, and the result has been a level of chaos and disorder.” pic.twitter.com/QQ86HIKOmU

“We’re not targeting a group of people, we’re targeting conduct,” the mayor told WPLG-Local 10. “If you can’t keep streets safe, then you’re not doing your job.”

Rochelle Walensky, director of the Centers for Disease Control and Prevention, told NPR: “Every time there’s a surge in travel, we have a surge in cases in this country. We are really trying to restrain travel at this current period of time.” Dr. Francis Collins, director of the National Institutes of Health, told the radio nonprofit the country needs to be patient. “We have been on a marathon since this all started a year ago. And, you know, when you’re running a marathon, you don’t want to stop at the 24th mile,” Collins said.

“Everybody is incredibly frustrated and tired of all of this, we just have to stick it out here for a few more weeks and months to make sure that we get to that finish line in a way that saves the maximum number of lives,” Collins added.