Marty Walsh confirmed as labor secretary, this week in the war on workers 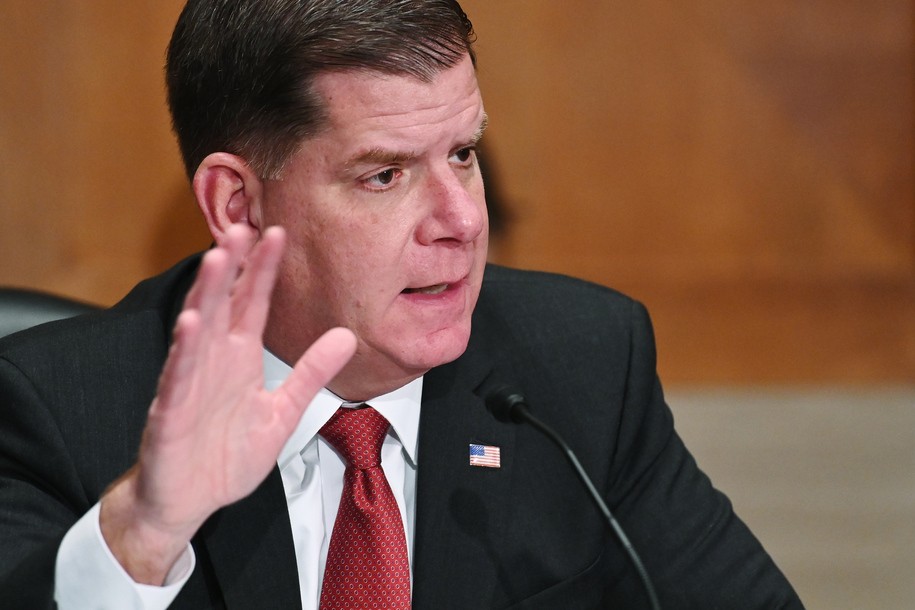 Marty Walsh, formerly the mayor of Boston, was confirmed as labor secretary on Monday in a 68 to 29 vote. Walsh was the head of the Boston Building Trades Council before being elected mayor. He was elected after starting his working life in construction, a member of Laborer’s Local 223—a local he went on to lead. He sounds like the stereotype of a working-class white guy union member, right? But Harold Meyerson has argued that Walsh has been an effective bridge, working “to push the trades into the 21st century. As mayor, Walsh prodded the city council to approve his proposal requiring construction companies working on public projects or private projects exceeding 50,000 square feet to have 51 percent of their workers’ hours go to city residents, 40 percent to minorities, and 12 percent to women. He has also pushed the building trades into supporting a host of progressive causes.”

And check out Walsh himself in a post-confirmation interview with The Washington Post, where he was blunt about how systemic racism has affected workers of color: “Money is one, but look around many offices and just see who’s working in them, who has opportunities. I mean, right after George Floyd got killed I had a meeting with a group of people in my office called BEN, the Black Employee Network. And I just listened. And every single person that spoke to me talked about the racism that they’ve experienced in their life, whether it’s in jobs, interviewing, whether it’s with the police, whether it’s with society. I think that it’s important at this moment in time to listen [and] be very intentional about the policies or the actions that we take.”

”Absolutely. There’s no question” that Walsh himself has benefited from white privilege, he said, and, “White people shouldn’t be afraid of the word white privilege. It can be a complicated conversation to have, but we can’t run away from it.”

We’ll see what he does, but having a lifelong union guy who has spent years pushing one of the more conservative parts of the labor movement toward progressive causes as labor secretary seems promising.

● Agricultural employers are asking the Supreme Court to make it harder for farmworkers suffering from poor pay and working conditions to unionize.

But organizers say the union effort is not a fight over a $15 or $16 wage — though Amazon founder Jeff Bezos made nearly $75 billion in 2020. It is a matter of morality, of just who will make money off their labors. It’s a question of good and evil, about what is righteous, and just, and fair. For these workers and the organizers who have traveled from across the South to support their unionization effort, this is their David and Goliath story. What they want is dignity.

Bargaining is still banned for state employees. But the new law, which takes effect May 1, allows cities, counties, and towns to bargain with their employees, an activity that had been expressly forbidden since a 1977 state Supreme Court ruling, codified by a 1993 law.

Counties and municipalities can now pass local ordinances to establish collective bargaining rights—if they choose. The law sets up a loose process, with huge parts left up to local interpretation. A majority of workers in a unit can petition the employer. The governing body, such as a school board or city council, must then vote on whether or not to allow collective bargaining.

● Medical news site Stat has been a must-read of the past year. Now, its journalists are joining the union at The Boston Globe.

● At a major education company, freelancers must now pay a fee in order to get paid.

● Colectivo could soon become the largest unionized coffee chain in the U.S.

BREAKING: The New Yorker Union has voted 98% in favor of authorizing a strike. We stand with our @condenast colleagues in @pk4union and @ars_union, which have also overwhelmingly authorized a strike. Our statement: pic.twitter.com/4EOxWFxCUu