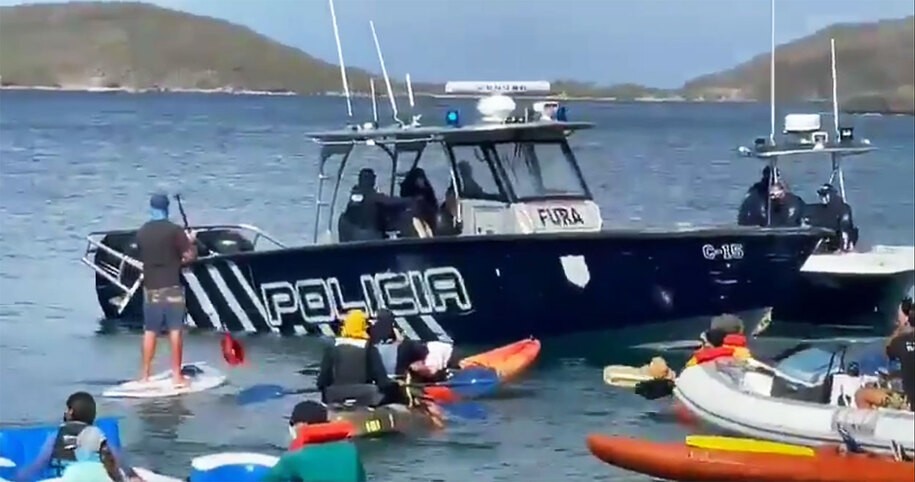 Ongoing mainland mainstream media coverage of Puerto Rico, other than dealing with the statehood issue, has been sporadic at its best and abysmal at its worst. You can double the negatives when it comes to Vieques and Culebra, two island municipalities of Puerto Rico. The island’s residents; “Viequenses” and “Culebrenses,” have been engaged in a battle with the Puerto Rican government over the issue of the life-threatening unreliability of ferry service to the two small islands and its recent privatization.

Culebra, which has about 1,800 residents is located 17 miles east off the main island of Puerto Rico and is 9 miles north of Vieques which is home to approximately 9,300 people. Though both can be reached by air or by private boat, the cost is beyond the means of the average resident, and so people are dependent on the ferry system.

I am not exaggerating when raising the issue “life-threatening unreliability.” In January of 2021,Tatiana Mena Ramos, wrote for BeLatina:

The Dangers of Vieques’ Unreliable Transportation System https://t.co/BGlE487Fhk via @BeLatina

Imagine you’re living on an island in the middle of the pandemic. The island doesn’t have a hospital, encounters frequent food shortages, and the only way to get adequate healthcare and other essential supplies is by ferry or plane. This is the reality of the residents of Vieques and Culebra — the two island municipalities that flank the east shore of Puerto Rico. For decades, these islands have struggled to keep afloat due to how disconnected they are from the mainland and the transportation system’s inefficiencies. With over 41% of both populations living under the poverty line, the only feasible way of getting to the mainland is by ferry since charter planes can cost anywhere from $40-$100 per trip.

The Puerto Rico Maritime Transportation Authority (ATM for its acronym in Spanish) uses only six ferry boats to connect the approximately 10,000 residents of these small islands to the mainland. Out of these six, often only two of these are operational due to constant failures in maintenance and repairs. As a result, wait times at the terminal end up becoming so long that many need to plan to use their entire day just to get to a doctor’s appointment. This also means that there is no guarantee they will be able to get back home the same day.

Findings from a report from the International Human Rights Clinic (IHRC) at Santa Clara Law in California, “Stranded: Human Rights Implications of an Inadequate Transportation System between the Islands of Culebra, Vieques, and Puerto Rico,” give more details and declare the transportation situation a violation of human rights.

The findings are the result of research and in-person interviews with residents of both island municipalities between Fall 2019 and Fall 2020.https://t.co/a3iaXf0pCd

Transportation problems between the three islands have come to a head in recent weeks, when passenger and cargo ferries have broken down, leaving scores of residents stranded and without provisions, and prompting the government to turn to the Puerto Rico National Guard for backup. Two weeks ago, the executive director of the Maritime Transportation Authority, Mara Pérez, stepped down from her post and on Saturday was replaced by Jorge Droz.

The appointment came as residents of Vieques and Culebra staged protests at the piers, frustrated over the transportation problems that affect their daily lives. Among other challenges, the estimated 10,000 residents of the two islands often have problems getting to and from Puerto Rico for doctor’s appointments, education and work.

The protests in Vieques and Culebra, Smaller islands of the archipiélago of Puerto Rico, are part of a decades long struggle for human rights. The government continues to ignore these communities despite the severity of the issue. More here:👇🏼https://t.co/IKsb66Q1eD

The citizen protests are being covered by CBS reporter David Begnaud, though most of the news is in Spanish.

These people in Culebra and Vieques rely on ferry service for food, water, transpiration you doctors appointments, etc. It is there road, so to speak, to the main island. Ferry service has been an unreliable service for decades. These people have had enough. pic.twitter.com/myMXnil4By

“[DEVELOPING] They arrest a protester who participated in the maritime blockade of the port of Culebra. Video via Chamblin. Details and reactions at 5pm in @NoticentroWAPA” the tweet below reads.

The English version reads “Viequenses oppose the privatization of the boat service”:

On the second day of public hearings to discuss the contract awarded to the company HMS Ferries for maritime transportation to and from the islands of Vieques and Culebra, community leaders from Isla Nena showed their opposition to the hiring, which they assured was given to their backs, and presented possible alternatives to address the main problem faced by the residents of the municipality islands.

The hearings took place while water protests in the municipality islands managed to prevent the landing of boats that were scheduled to dock there in the morning and led to the suspension of the service by the Department of Transportation and Public Works.

“This contract, at no time was made to benefit the needs of the residents. It gives us no hope. We have led a life screaming and it is a shame that we have to be screaming so that the main problem that the residents of the municipality islands have is addressed, ”said Andrea Malavé Bonilla, member of the We Are More than 100×35 Collective, an organization that brings together community leaders from Vieques.

This video tweet includes an interview with one of the protestors—Dolly Camareno Diaz, who was a candidate for the Culebra mayoral election in 2020.

Since I wasn’t going anywhere for a couple days, I decided to create an informative video for the diaspora that want to know what was going on in #Culebra & #Vieques 🙏🏽 pic.twitter.com/PgxRzqlDkO

Protests around Vieques and Culebra have been going on for many years.

#PuertoRico communities in Vieques and Culebra have been organized for decades. Here we see protests against the US Navy, which used both islands for exercises with live munitions over the twentieth century. Other sectors organized for the US military to stay. Complex dynamics. https://t.co/klgDDxWf3v

I’ve been re-posting news from Puerto Rico to social media every day since Hurricane Maria—including a day count.

No hospital. Military waste contamination. Cancer cluster. Unreliable ferry service. Vulture developers. How much more does Vieques have to suffer?  It has been 1285 days post Maria since Puerto Rico had full power.

I also post a Puerto Rico news roundup to the comment section of Abbreviated Pundit Roundup here on Daily Kos each morning. I hope that we can raise the media profile of events taking place in Vieques and Culebra and that the residents will get reliable ferry service, and a hospital in the near future. Help make it happen by spreading the word.