‘Owning the libs’ isn’t really funny, but it is a hallmark of fascism 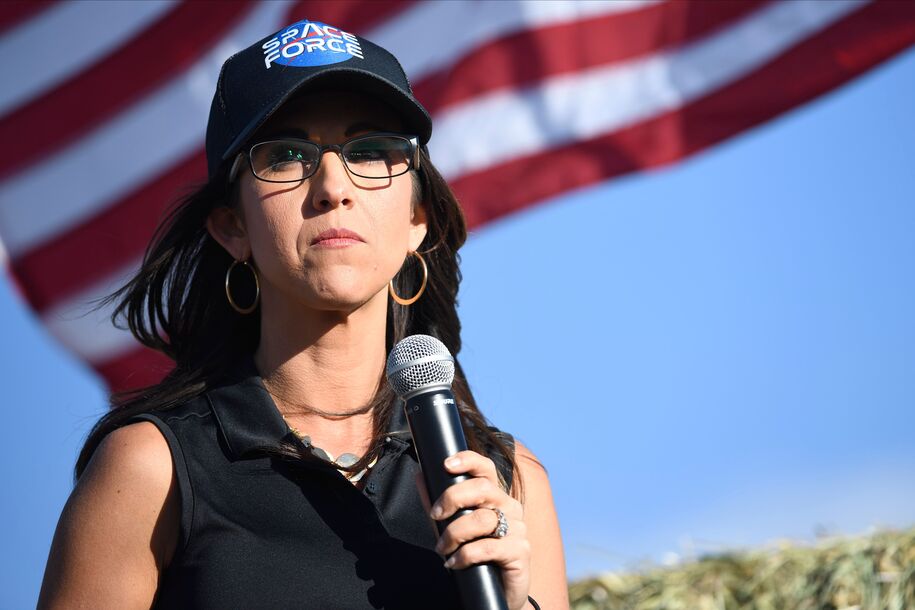 When Colorado Rep. Lauren Boebert decided it would be a good political move to issue a histrionic email—declaring “I told Beto ‘HELL NO’ to taking our guns. Now we need to tell Joe Biden”—only hours after the news broke about the latest horrific mass shooting in a Boulder grocery store, many people took her to task for the callousness she demonstrated in self-promoting and fundraising off a tragedy.

That criticism was valid, but it misses a more relevant point. Boebert did this intentionally, calculating that the blowback she received would be proportionately less than the credit and acclaim she’d get for her insouciant disregard of human life. In fact, the blowback is what she counted on. After all, the desired effect was accomplished: she’d provoked the “liberal media ” into a wholly predictable response. In other words, she “owned the libs”—at least in the eyes of the people who will continue to vote for her.

Boebert knew she’d be criticized, and that the criticism would be deserved. But by intentionally baiting her own excoriation, she was reaching for what has now become the sole arrow remaining in the entire Republican quiver. As expressed cogently by Derek Robertson writing for Politico, “owning the libs” is not necessarily a political victory over Democrats, but rather a demonstration of “a commitment to infuriating, flummoxing or otherwise distressing liberals with one’s awesomely uncompromising conservatism.”

Robertson’s worthwhile take on the subject, which promises to be a kind of dissection of the psychology underlying the “own the libs” phenomenon now ubiquitous within Republican Party ranks, still suffers from a facile sugarcoating of the concept by his Republican sources. He quotes Helen Andrews, editor of The American Conservative, who ennobles the process of “owning the libs” by elevating it to a virtue: “’Owning the libs’ is a way of asserting dignity,” she says. “‘The libs,’ as currently constituted, spend a lot of time denigrating and devaluing the dignity of Middle America and conservatives, so fighting back against that is healthy self-assertion; any self-respecting human being would … Stunts, TikTok videos, they energize people, that’s what they’re intended to do.”

That’s not really true, though. Whatever outrage that liberals direct toward “conservatives” is usually based on plain-old empirical evidence. If we tend to categorize Donald Trump’s supporters as racist, for example, it’s because they either affirmatively endorsed (or turned a blind eye to) racism by voting for Trump, who clearly demonstrated his own embrace of racism, over and over. We don’t seek to “devalue” their dignity, because we don’t recognize any “dignity” there to begin with; their actions are reprehensible, they hurt other people and they should know better. If “dignity” is even implicated, it’s cognizance of their own lack of it—their anger at their sorry-assed selves being revealed—that compels them to respond with a defensive, mocking nihilism.

Still, to his credit, Robertson traces the origins of this phenomenon back to the McCarthy era. Then, conservatives would justify Sen. Joe McCarthy’s worst excesses by intoning that “at least he stood for something,” whereas his opponents allegedly had no similar certitude of purpose. But while McCarthyism may have been the historical precedent to what we see spewed ad nauseum in virtually all conservative media content today (particularly since Trump, who elevated the heinous and offensive to an art form), it now seems that that “owning the libs” has become the entire rationale for a Republican Party singularly bereft of any ability to perform its supposed intended function of governing on behalf of the American people.

“It basically offers the party a way of resolving the contradictions within a realigning party, that increasingly is appealing to down-market white voters and certain working-class Black and Hispanic voters, but that also has a pretty plutocratic agenda at the policy level.” In other words: Owning the libs offers bread and circuses for the pro-Trump right while Republicans quietly pursue a traditional program of deregulation and tax cuts at the policy level.

So “owning the libs” is, at the very least, a scam, a feint, a mask for the Republican Party’s utter indifference to the real-life concerns of their constituents, for whom elected Republicans have had absolutely nothing to offer. It’s distracting entertainment substituted as policy. But is it more than that?

As the Biden administration enters its third full month, it’s useful to recount exactly what Republicans have done in the interim. Thus far, the only reaction from the right to the progressive measures being instituted on an almost-daily basis by the new administration has been an exercise in outrage politics. From the truly ridiculous, such as the saga of Dr. Seuss and Mr. Potato Head, to the truly dangerous—such as anti-immigrant racism and Fox News’ over-hyped “border crisis” or the simplistic hatred of anti-transgender bias.

All of these tactics have something in common: They’re performative exaggerations of social and cultural shifts that in reality have little or no tangible impact upon the daily lives of Republican constituents. Show me a Republican whose lives have actually been affected by an undocumented immigrant (few Republicans know any, and fewer still aspire to the “jobs” they fill), by a children’s book few if any Republicans have ever read, or by a transgender child playing sports (few Republicans have ever encountered one). These are all red herrings—shiny objects for the right to hold up and point to with one hand, while the other hand is busy with more substantive goals, such as impeding people of color from voting.

But they’re also symptomatic of a party that has completely abandoned “policy” as a governing principle. Instead, what we see is a Republican Party that has committed itself to one goal only: maintaining its grip on power by totally committing itself to inflammatory cultural issues. In its drive to maintain power, the GOP has adopted the same tactics of far-right parties in Europe, stoking grievances with apocalyptic, xenophobic rhetoric against immigrants and LGBTQ people, whom it attempts to marginalize as “social deviants” who are a threat to the “purity” of the population.

As was observed by Thomas Mann and Norman Ornstein last year, the modern Republican Party now closely resembles the neo-Nazi and white nationalist parties now emergent in Europe, such as Germany’s AfD and Hungary’s Fidesz, both in its ideological makeup and tactics, as it relentlessly tacks rightward.

The GOP has become an insurgent outlier in American politics. It is ideologically extreme; scornful of compromise; unmoved by conventional understanding of facts, evidence and science; and dismissive of the legitimacy of its political opposition.

What we see in the behavior of these proto-fascist European parties is another, peculiarly European version of the “own the libs” approach, by mocking the Holocaust, for example, as reported by the BBC.

The party’s leader in the eastern state of Thuringia, Björn Höcke, once described Berlin’s Holocaust memorial as a “monument of shame” and called for a “180-degree turnaround” in Germany’s handling of its Nazi past. Picking up the same theme, Alexander Gauland trivialised the Nazi era as “just a speck of bird’s muck in more than 1,000 years of successful (German) history.”

Similarly, those who resist or object to these tactics are drummed out of the party apparatus altogether.

The AfD has managed to attract voters from the centre right and even the centre left but in the words of Verena Hartmann, a moderate MP who left the party in January 2020 because it was becoming too extreme: “Those who resist this extreme right-wing movement are mercilessly pushed out of the party.”

Writing for Salon, Heather Digby Parton shrewdly documented this phenomenon at CPAC this year, in which Republicans, hoping to take up the coveted mantle of Donald Trump, spent nearly all their energies playing up to the crowd’s laundry list of hot-button grievances. Seldom if ever venturing into policy matters, the tone and tenor of those speaking reflected the prevailing sentiment of the attendees: “They don’t care if these people are right or wrong, it’s their unwillingness to back down no matter what that they admire.”

Parton cites Soviet-born author Masha Gessen, who shows how the “own the libs” phenomenon has its counterpart among the far-right parties that have arisen in former Communist states such as Hungary, as well as Western European countries now under siege by right-wing “populism.” In particular, Gessen quotes Balint Magyar, who characterized the appeal of such parties as “an ideological instrument for the political program of morally unconstrained collective egoism.”

Magyar suggested reading the definition backward to better understand it: “The egoistic voter who wants to disregard other people and help solely himself can express this in a collective more easily than alone.” The collective form helps frame the selfishness in loftier terms, deploying “homeland,” “America first,” or ideas about keeping people safe from alien criminals. In the end, Magyar writes, such populism “delegitimizes moral constraints and legitimizes moral nihilism.”

The whole point of “owning the libs” is to project an in-your-face disregard to norms of decency and morality that most people have grown to expect from our civil society. In this mindset, “Fuck your feelings” becomes a litmus test of moral nihilism toward others, a requirement to confirm one’s party loyalty and be part of the “club.”

The difference between the Unites States and Europe, however, is that unlike Europe, the U.S. political landscape is essentially limited to a two-party system. The Republican Party has moved so far to the right that the American public is now left with a choice between a relatively moderate Democratic Party and an extreme, far-right Republican Party, with nothing at all in between. Because our American electoral system unduly favors low-population “conservative” states, providing them equal representation in the U.S. Senate, and because of partisan gerrymandering ensuring that the GOP maintains rough parity with, if not domination of, Democratic voters who tend to be clustered in metropolitan and suburban areas, these two parties are afforded equal time and attention by the traditional media and the political process.

But they are not equal, in numbers or motivation. One party represents far more voters, as shown in the national popular vote in election after election for the past 20 years, while the other represents a dwindling and aging voter base. One party represents inclusion and social progress,  the other openly embraces xenophobia, racism, and voter suppression. With its new penchant for denying the legitimacy of elections, and its now-open embrace of paramilitary organizations and white supremacy, the Republican Party is rapidly moving toward the textbook definition of fascism, if it has not already arrived there.

“Owning the libs” may seem funny, and even harmless, to those who practice it or profit by it. The reality is that a party whose messaging now relies solely and exclusively on establishing a “litmus test” that deliberately and intentionally abandons moral constraints and human decency is hardly breaking new ground. In fact, it’s following a tired and familiar path, conditioning its followers to dehumanize those who oppose them politically, while instead embracing autocracy and, ultimately, fascism.