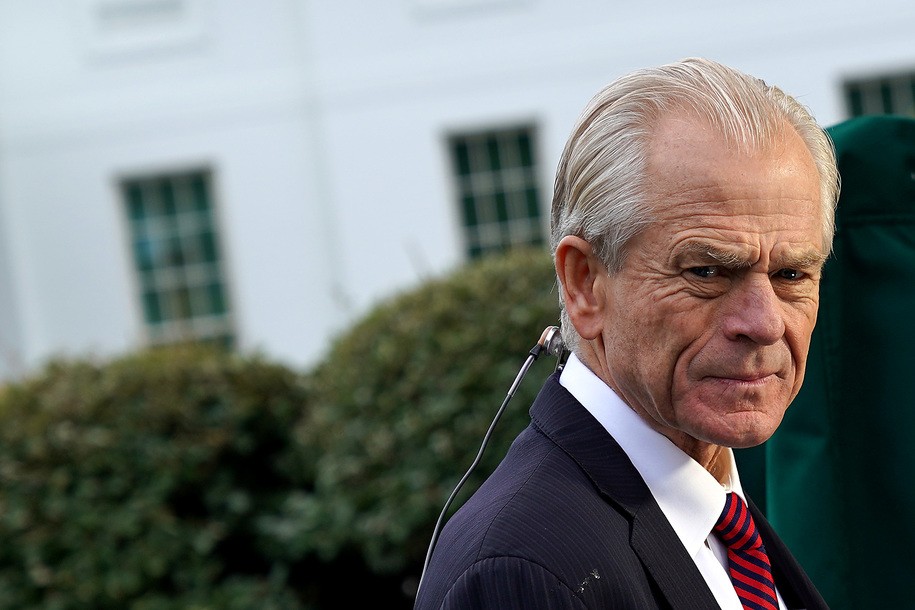 Top Trump trade adviser Peter Navarro didn’t come out of nowhere. The administration found him where most high-level government aides are found … i.e., the same place I found the anti-fungal treatment for my big toenail—Amazon.

You may or may not know that Donald Trump’s son-in-law Jared Kushner found Navarro while browsing Amazon after Trump asked him to do research on China. Well, now you do. (For the record, I’d give Navarro fewer stars than the toenail fungus solution and about the same rating as this ranch dressing soda. As trade advisers go, he was nearly ranch dressing soda-level, which gives him a nice attainable goal to strive for.)

The only reason he doesn’t score lower is this: He actually attempted to take the COVID-19 pandemic seriously back when Trump was diligently working to get a handle on the crisis by tweeting insults at Adam Schiff. A new Washington Post story reveals that Navarro urged Trump to source key medical supplies in March of last year, but Trump ignored him.

According to the report, Navarro then attempted to cobble together a solution by committing more than $1 billion in government funds to fill an expected supply gap.

Navarro, who served as Trump’s trade adviser, warned the president on March 1, 2020, to “MOVE IN ‘TRUMP TIME’” to invest in ingredients for drugs, handheld coronavirus tests and other supplies to fight the virus, according to a memo obtained by the House’s select subcommittee on the coronavirus outbreak. Navarro also said that he’d been trying to acquire more protective gear like masks, critiquing the administration’s pace.

Trump time? Wherever do people get this idea that Donald Trump works at lightning speed? I mean, I’ve seen him agitated and (probably) Adderall-besotted, but that’s not the same as demonstrating a keen sense of urgency. I’ve also seen my dog furiously lick himself for a few minutes before resuming his nap. Same fucking thing.

“There is NO downside risk to taking swift actions as an insurance policy against what may be a very serious public health emergency. If the covid-19 crisis quickly recedes, the only thing we will have been guilty of is prudence,” Navarro wrote to the president. At the time, there were about 100 confirmed cases of coronavirus in the United States and just two deaths linked to the outbreak.

Donald Trump doesn’t think any further ahead than what he’s going to have for dessert. It’s cute that Navarro thought he could light a fire under Trump, but the only hair-on-fire emergency Trump would ever acknowledge is his own hair literally being on fire.

But after Trump ignored Navarro’s recommendations, the trade adviser embarked on his own strategy to acquire supplies with little oversight, Democrats said. Navarro subsequently steered a $765 million loan to Eastman Kodak to produce ingredients for generic drugs, a $354 million sole-source contract for pharmaceutical ingredients to a start-up called Phlow, and a $96 million sole-source contract for powered respirators and filters from AirBoss Defense Group.

Okay, so at this point maybe you’re thinking, “Oh, well, at least Navarro tried to do something.” And, sure, it’s nice to give him the benefit of the doubt, particularly since Trump tried to sideline him. But then you don’t know the power of not finding your administration’s top advisers on Amazon.

According to the Post, the loan to Kodak was halted last year following multiple congressional committee investigations. For one thing, Kodak had never manufactured drugs before (it was a camera business, for those who are younger than my toenail fungus). Phlow had also never manufactured drugs before, which sort of makes sense, since it wasn’t incorporated until January 2020.

The weirdness doesn’t end there. One of the things Kodak was pitching to the administration was a proposal to manufacture hydroxycholoroquine, which the ocher abomination had glommed onto like it was the last bucket of Extra Crispy in the universe.

On Wednesday, Rep. James Clyburn, the chair of the House’s select subcommittee on the coronavirus outbreak, asked HHS Secretary Xavier Becerra and DHS Secretary Alejandro Mayorkas to release more information about Navarro’s plans. The South Carolinan also had some tart words for the previous administration: “These documents provide further evidence that the Trump administration failed to react quickly to the coronavirus pandemic in spring 2020 despite urgent warnings, failed to implement a national strategy to alleviate critical supply shortages that were putting American lives at risk, and pursued a haphazard and ineffective approach to procurement in which senior White House officials steered contracts to particular companies without adequate diligence or competition,” Clyburn and other Democrats wrote in a letter to Becerra.

In other words, Donald Trump done fucked up, and the guy his son-in-law found on Amazon tried, and failed, to make something out of the hash he was given.

Peter Navarro calls COVID-19 the “Fauci Virus” calling Fauci “the father of” the virus and accusing him of allowing China and the People’s Liberation Army to “genetically engineer” COVID-19. Host Rachel Campos-Duffy lets it slide. pic.twitter.com/5pINTVc8Pc

Luckily, we now have people addressing the COVID-19 pandemic who are both engaged and competent.