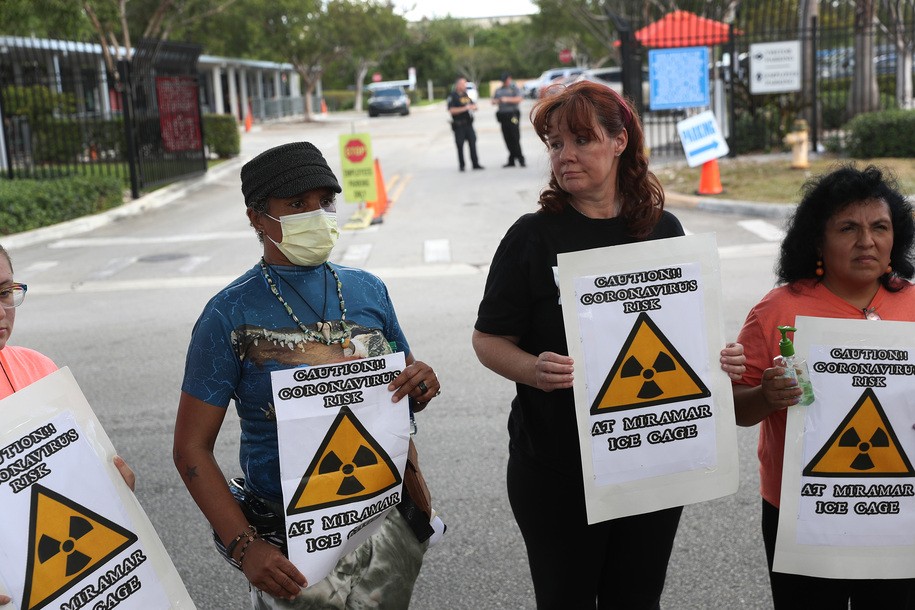 In the earliest weeks of the novel coronavirus pandemic last year, people jailed at a private immigration prison in Arizona held a peaceful protest over the lack of sufficient personal protective equipment (PPE) provided to detainees. The facility responded to their pleas by violently deploying chemical agents at them, the Department of Homeland Security (DHS) Office of Inspector General said in a new report released Thursday.

In surveillance photos from report, immigrants held at CoreCivic’s La Palma Correctional Center (LPCC) in Eloy are seen sitting on the floor in a common area. Several are holding their ankles while others have their arms across over their knees. It looks like a peaceful protest because it was a peaceful protest. But in next photo, a dozen officers in riot gear surround a group of men crouching for cover on the floor. One officer is seen deploying a chemical stream straight into the group.

”A letter signed by 182 LPCC detainees indicates the facility used pepper spray, pepper balls, and chemical agents, and punished protesting detainees with lengthy stays in segregation. We confirmed LPCC used chemical agents to end the protests,” the report said. “A detainee told us he suffered injuries from pepper balls fired by facility staff, but felt too intimidated to file a report about the incident through proper channels. Nonetheless, detainees filed six grievances with the facility about these incidents. The facility denied or rejected all six grievances.”

@DHSOIG just published a damning report of horrendous conditions in immigration detention in Eloy, AZ, describing abuses and medical neglect – things we have known for years. This picture says it all. pic.twitter.com/HdgmxKmXAZ

Inspectors also found “serious concerns regarding detainee care and treatment,” the report said. “One detainee, who is a cancer patient, ran out of leukemia medication after the medical staff did not order a refill on time.” Inspectors note that because detained people are not allowed to have their medications on them, this detained person “was not aware of when the medication was running out or how long it would take medical staff to obtain a refill.”

“However, the detainee’s medical file shows that a health care provider incorrectly told the detainee it was the detainee’s failure to fill out are fill request that resulted in the interruption of his medication,” the report continued. “Further, the sick call log revealed five entries where detainees sought refills on chronic care medication that the facility should have refilled automatically.”

Inspectors also reported that detained people who were placed in segregation were effectively abandoned. “We found the facility was not consistently providing required care, including no exchange of laundry and soiled bedding and clothing, no legal materials, no haircuts, limited recreation, no access to the commissary for detainees who are in administrative segregation, and no masks in response to COVID-19.” Inspectors said that because the facility “did not consistently record medication administration and daily medical visits for detainees in segregation,” they could not verify if they were given their required medications.

The inspector general’s office issued eight recommendations “aimed at improving care of detainees at La Palma Correctional Center,” the majority of which remain unresolved, the report said. Hanging over this report is the overall issue of private immigration prisons existing and contracting with the federal government in the first place. “Fundamentally, it’s time to start closing some of these facilities, starting with the ones with the most egregious track record,” American Immigration Council Policy Director Jorge Loweree told CNN. “This report outlines the inability of people with chronic illnesses to obtain necessary medication to treat those illnesses. That’s inexcusable.”

Private prison companies played a role in worsening the novel coronavirus pandemic, and stood by while ICE mislead the public on the numbers. The pandemic raged at another privately operated immigration facility in Eloy last summer, with hundreds of confirmed cases among detained immigrants. But while NBC News reported at the time that nearly half of CoreCivic’s employees at the Eloy Detention Center had also tested positive, ICE excluded them from their public tally because they were third-party workers.

ICE might have just wanted to pretend there was no issue among workers, but their illnesses were adding on to the dangers people already face in immigration detention. One detained person told attorneys with advocacy group Florence Project that she didn’t get food or water for a period of over 24 hours because of lack of staff, while another said they’d been unable to contact their attorneys.

In a recent policy brief, the American Immigration Lawyers Association urged the Biden administration to begin moving away from the use of mass detention. “In the past two decades, the gross overuse of detention for immigration purposes has resulted in unsafe confinement conditions, unlawful and abusive practices, and the steady escalation of the numbers of people in custody. Today, the cost of detention borne by U.S. taxpayers exceeds $2billion annually,” the brief said.

“Even more importantly, detention has been wrongfully applied as an instrument of punishment and deterrence—aims that are inappropriate for immigration purposes,” the brief continued. “Trapped in detention, adults, children, and families are unable to communicate meaningfully with their legal counsel and communities, and as a result, are denied due process and a fair chance at obtaining asylum or other legal relief. These practices are abhorrent to American values and simply cannot continue.”