Heartbeat bills aren’t just a war on women, but an attack on the right to privacy 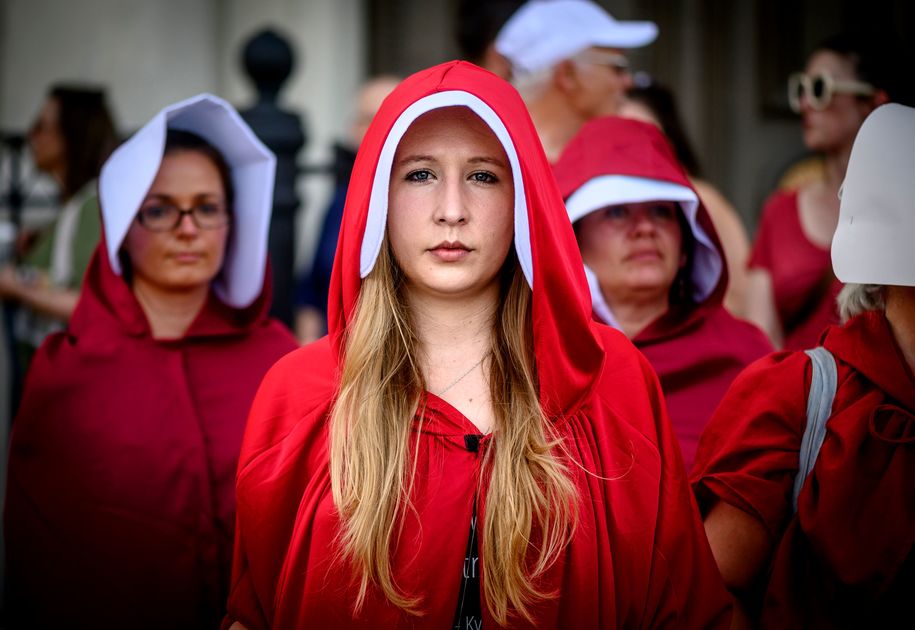 I’ve spent most of my life no more than 20 minutes from the border of South Carolina. But there are times when the distance between my home in Charlotte and the South Carolina line feels more like two different worlds. One of those times came in February, when Gov. Henry McMaster signed a bill that had the effect of banning almost all abortions in South Carolina.

The bill, which can be read in full here, is the latest attempt at a “heartbeat bill.” The brainchild of veteran forced-birth activist Janet Porter, it’s based on the premise that abortions must be all but illegal, if not completely illegal, if a heartbeat can be detected—which would effectively ban most abortions after the fifth or sixth week of pregnancy. The only exceptions would be for cases of rape, incest, or danger to the mother’s life.

Porter made much of a poll conducted by Barna Group that showed overwhelming support for banning abortions if a fetus’ heartbeat could be protected. But there’s one problem. By then, it had been amply established that heartbeat bills are based on science that is dubious at best.

In 2013, when Porter tried to push a heartbeat bill in her home state of Ohio, Mother Jones noted that not all fetal heartbeats can be detected at the same time. Among other things, it depends on the fetus’ position in the uterus. Moreover, the only way to detect a heartbeat this early would be via a vaginal ultrasound. As a number of Kossacks noted in 2010 when Florida tried to require women to get vaginal ultrasounds before having an abortion, this procedure is horribly invasive to the point of rape.

Like clockwork, Planned Parenthood sued before the ink even began to dry on McMaster’s signature. Federal judge Mary Geiger Lewis issued a stay preventing this misbegotten bill from taking effect, and extended the restraining order in March.

Last Friday, Lewis converted the stay into a preliminary injunction. In doing so, she gave McMaster and other South Carolina officials a judicial tongue-lashing. She accused them of making the “fanciful, misbegotten, and misguided argument” that this heartbeat bill passed constitutional muster “while knowing full well it was not.”

You never, ever, ever want to hear a judge call your arguments “fanciful, misbegotten, and misguided.” When a judge uses language like that, he or she is effectively saying that you have no case at all. You can hardly blame Lewis for using such language. After all, she knew the real reason for this law’s existence: McMaster and friends clearly hoped to turn this bill into a battering ram that could obliterate Roe v. Wade if it made it to the Supreme Court, with its 6-3 conservative majority.

When I first got an alert on my phone that McMaster had signed this bill into law, I came to the same conclusion as Lewis did a month later. This was pure performance art—the kind of thing that led me to realize a decade earlier that I could not identify as a pro-life Democrat. It was more evidence that what passes for leadership on the pro-life movement doesn’t really give a damn for the sanctity of life.

Many of my longtime readers know that when I first arrived on Daily Kos in 2004, I was pro-life. I’d spent a good part of my adult life vacillating between both sides of the abortion divide. Part of it is that, as a charismatic Christian, on paper I should be receptive to pro-life arguments.

But over time, I realized that the pro-life movement has nothing to do with the sanctity of life and everything to do with eroding the right to privacy through the back door. South Carolina’s abortion ban encapsulates this mentality. How in the world do you justify effectively banning abortion before most people even know if they’re pregnant?

In hindsight, the first evidence I saw that the pro-life movement amounted to an attack on our privacy came in 2009, when Oklahoma passed a law that would have set up a database of information about every abortion performed in the state. It would have listed the date of the abortion, the county where it took place, the mother’s age and marital status, her race, her education level, and all sorts of other personal information. It may not have contained the woman’s name, but it would have contained enough information to identify her.

When I saw this, I recalled something that was drilled into us in journalism school at the University of North Carolina—if you publish enough information to identify someone, it’s legally the same as publishing that person’s name and address. Simply put, Oklahoma had enacted an open door to harassment. Even now, almost 12 years later, I am still dumbfounded that no one in the Oklahoma legislature took this into account. Fortunately, the larger bill of which this database formed a part was struck down in 2010.

In 2011, as part of an effort to end taxpayer subsidies for abortions, the Republican-controlled House tried to include exceptions for pregnancies that happened due to “forcible rape.” Anyone with half a brain knows damn well that ALL rape, by definition, is forcible. Why would they attempt to change the definition unless there was something else in mind other than the sanctity of life? Fortunately, the outcry was so fierce that the Republicans were forced to back down.

The scales really started falling from my eyes later in 2011, when fellow Kossack SemDem alerted us about a pending anti-abortion measure in his state of Florida that included a vaginal ultrasound requirement. He linked to the article about the 2010 attempt to require vaginal ultrasounds. When I first saw that article, I was horrified. How could anyone mandate such an invasive procedure? And so soon after trying to change the definition of rape?

But even with this, I wasn’t quite ready to call myself pro-choice yet. Seeing more of what “mainstream” pro-lifers considered to be acceptable pushed me closer to the edge of the fence. For instance, they promote crisis pregnancy centers that have been proven to give women information that isn’t just inaccurate, but dangerous. In 2013, Payne McMillan, then the co-coordinator of Students for Reproductive Health at St. Olaf College in Northfield, Minnesota, called out one such center near his campus for engaging in all manner of deceptive tactics, such as lying about how far along a pregnancy is and showing ultrasounds of other women’s wombs. This center also claimed that STDs can disappear with time.

Caitlin Bancroft of NARAL Pro-Choice Virginia visited a crisis pregnancy center in Manassas, and was told that birth control pills can cause cancer, condoms are “naturally porous” and don’t protect against STDs, and that IUDs could kill her. At another center in Falls Church, she overheard two employees discussing how to manipulate her reaction to her pregnancy test. As she saw it, those who run these outfits see women who are “actually struggling with an unintended pregnancy” as “walking wombs,” not people. If there is any difference between that mentality and the mentality that drives heartbeat bills, I don’t see it.

What pushed me off the fence was the 2013-14 saga of Texas paramedic Marlise Munoz. Her husband, Erick, found her unconscious on the night of Nov. 26, 2013, in their home in Haltom City, Texas, a suburb of Fort Worth. Erick rushed her to John Peter Smith Hospital in Fort Worth, where doctors determined she’d likely suffered a blood clot on one of her lungs. Soon afterward, doctors told Erick that Marlise was brain dead.

Marlise had let it be known that she did not want to be kept alive by artificial means. Accordingly, soon after learning she was brain dead, Erick asked hospital officials to take her off life support. However, the hospital refused. It turned out that when she arrived at the hospital, she was 14 weeks pregnant. According to hospital officials, Texas law required pregnant women to be kept on life support until a viable fetus can be delivered.

One problem—in Texas, brain death is legal death. So common sense would dictate that it is not possible to maintain life support on a dead person, right? Well, the hospital didn’t see it that way. In January 2014, Erick took the hospital to court. He argued—rightly—that maintaining life support on a brain-dead woman just because she was pregnant amounted to desecrating a corpse. He had the full support of his in-laws, Lynne and Ernest Machado.

During legal proceedings, the hospital acknowledged through its lawyers that Marlise had been brain dead as early as Nov. 28. The hospital also acknowledged that the fetus was not viable. Earlier, Erick’s lawyers had uncovered evidence that the fetus had severe abnormalities due to having been deprived of oxygen, and thus had virtually no chance of surviving outside the womb.

Marlise was removed from life support on Jan. 26. Erick told local ABC affiliate WFAA that the fetus—who would have been a girl had it survived—likely stood no chance because Marlise had been without oxygen so long.

Later, he and Lynne told Anderson Cooper that Marlise had the look and smell of death on her. They added that the order to keep her hooked to life support threw the doctors for a loop; they all knew Marlise was gone.

Even more chilling, Erick’s lawyers argued that if Texas law really required pregnant women to be kept on life support even if they were brain dead, then healthcare providers would have to check dead women of childbearing age for signs of pregnancy. Under this scenario, if the corpse were indeed pregnant, doctors would have to hook the corpse up to life support—an oxymoron if there ever was one.

This can only be described as Orwellian. If standing up for the sanctity of life required you to desecrate a corpse, I wanted no part of it. There was no longer any doubt in my mind—the pro-life movement was out to erode the right to privacy through the back door. It was at that moment that I was absolutely, positively off the fence and was firmly in support of a woman’s right to choose.

Any doubts were erased when the four Republicans running for lieutenant governor of Texas later that year held a debate just days after Marlise was taken off life support. All four men on that stage—including the then-incumbent, David Dewhurst, and his eventual successor, Dan Patrick—announced they would have kept Marlise on life support. They were seemingly taking their cues from Operation Rescue’s patently offensive claim that Marlise was merely in a coma.

Even worse, Dewhurst and Patrick both indicated that if there were a conflict, the requirement to keep a pregnant woman on life support would prevail. Which means that if it were up to these gentlemen—a term that, in this case, must apply in its loosest possible sense—the Orwellian scenario spelled out by Erick’s lawyers would be the law. If that isn’t evidence that what passes for leadership in the pro-life movement is really out to gut our right to privacy, I don’t know what is.

South Carolina’s heartbeat bill, and others that have been peddled across the country, should remove any remaining doubt that the pro-life movement is not just a war on women. It’s a war on privacy. More and more, it’s apparent that didn’t leave the pro-life movement. It left me. And frankly, I’m not sure if I was ever part of it.