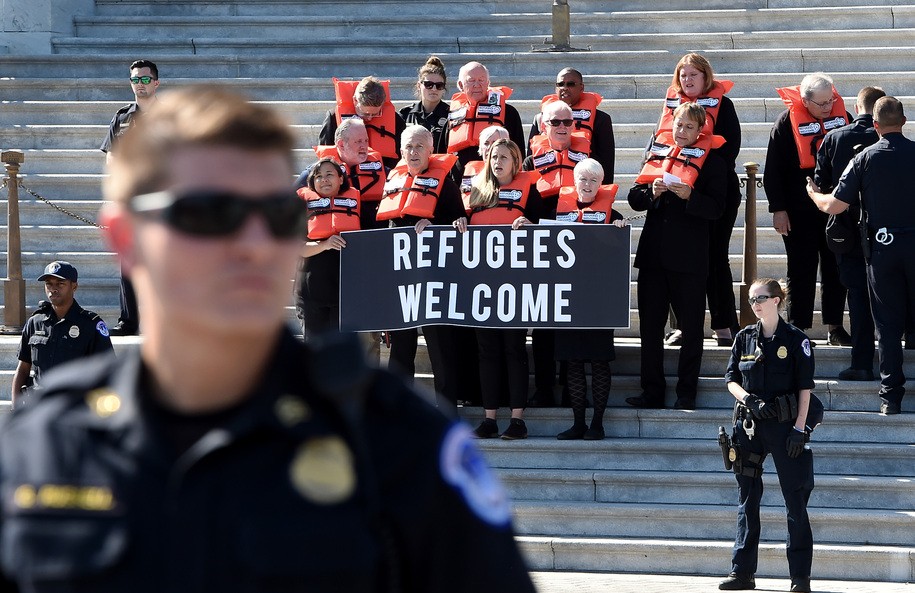 The acclaimed science fiction writer and author of the Dune series of novels, Frank Herbert, memorably wrote that “Fear is the mind-killer.”  Since the 1950s the Republican Party in this country has operated under a similar assumption, with the politics of fear as its modus operandi to achieving and consolidating political power. In relying on this tactic they can count themselves among a long and tawdry list of right-wing political parties throughout the past century, spawned in every corner of the globe.

Fear is widely employed by the right-wing because it works, even when the fear is imaginary or, more commonly, wholly contrived. A scared, constantly resentful populace is a docile populace, and a docile populace is necessary to Republicans’ actual goal, which is to allow its funders and donor base essentially to loot this country’s vast wealth and resources at the expense of ordinary Americans. In the U.S. an entire right-wing media apparatus now exists for the sole purpose of keeping Americans afraid of supposed “threats”  to their existence or livelihood, threats which mostly vanish into thin air under objective scrutiny but still manage to whip their credulous adherents into a nationalist frenzy.  The supposed threat posed by immigrants is one of these contrived, imaginary threats.

In 2016 the Republican Party, following the lead of Donald Trump, found a new target for its fearmongering: the impoverished, desperate, undocumented immigrant with his family in tow, supposedly menacing our nation’s southern borders, clamoring for entry. The claimed threat from these immigrants was the increase in crime and drain on the nation’s resources (both of which claims are false), but in reality the aim was purely xenophobic in its tactics, to demonize and “otherize” immigrants based predominantly on their skin color. Trump transformed the fear of such immigrants into an article of faith among the Republican base, so much that, despite setbacks in 2018 and 2020, the GOP continues to reflexively stoke fear of these people, even though such fears are unfounded. And the media have lazily acquiesced, regularly parroting right-wing talking points about the “crisis” presented by these immigrants, many of whom are refugees fleeing persecution and death in their home countries.

The antidote to such fearmongering, just as Herbert described in Dune’s famous “fear litany,” is to face one’s fear, to let it “pass through and over one,” so to speak. With immigration, one way to do that is to understand what has occurred in other countries who have admitted vast numbers of refugees during the past decade.

The demonization of immigrants and refugees had shown promise in Europe, as cynical political tacticians such as Steve Bannon, Donald Trump’s first chief of staff, were well aware. The catastrophic impact of the Syrian civil war and the appalling depredations of the Islamic State (ISIS) had resulted in millions of refugees with literally no place to escape. Many naturally turned to Europe, where they soon faced a virulent strain of nationalist and xenophobic sentiment ginned up by the opportunistic inheritors of Europe’s horrific experience with unbridled right-wing domination in the form of the Nazis.

The 9/11 attacks in the U.S. and other high-profile terror attacks in Europe provided right-wing demagogues both here and in other Western nations a brief opportunity to raise their game; but in the U.S. the fiasco of the Iraq War and the gross fumbling of the economy under the administration of George W. Bush effectively neutered that option here by 2008. Europe, however, came out of the Great Recession with even more severe scars than the U.S. (some of them self-imposed by misguided “austerity” measures), and provided a more fertile ground for anti-immigrant fervor, a fervor which was exploited further with the arrival of Syrian, Iraqi, and other displaced refugees.

As explained by Thomas Rogers, writing for the New York Review of Books, the refugee crisis in Europe dwarfed the situation that now exists at the U.S. border, provoking a crisis among members of the EU, as “many countries refused to bear the burden of housing and feeding the new arrivals, producing bitter disagreement among European Union member states.”

Ultimately, Germany took in about 45% of the refugees, numbering 1.2 million people. And immediately, the German far-right, led by the ultra-nationalist “Alternative for Germany” (AfD) party “raced to outdo one another in venal, attention-grabbing rhetoric.” In this country, Donald Trump, who would transform an already xenophobic and racist Republican Party into an even more virulent, anti-immigrant megaphone, called the German decision to admit these refugees a “catastrophic mistake.”

As Rogers points out, however, this fearmongering by the right turned out to be wrong:

Now, more than five years after the refugee crisis, the apocalyptic predictions have not materialized. According to numbers released last summer, the migrants from that period have integrated faster than previous refugee influxes. Approximately half of them have jobs, and another 50,000 are taking part in apprenticeship programs. The federal education minister has stated that more than 10,000 are enrolled in university. Three quarters of them now live in their own apartment or house and feel “welcome” or “very welcome” in Germany. The financial cost to the German government of taking in the migrants—including housing, food, and education—is likely to be recovered, in taxes, earlier than many had predicted.

The assimilation of what amounted to 1.5% of Germany’s population has not been without problems; Rogers notes that nearly a quarter of a million may not qualify for refugee status, many thousands are illiterate and unable to learn the German language, and a “disproportionate number of the newcomers are working jobs with few prospects for advancement, raising concerns that they may remain trapped in vulnerable economic conditions for the foreseeable future.” However the majority of these former refugees have largely found acceptable work in both the major cities and rural areas.

The primary reason Germany could successfully integrate such a large number of refugees is that it put its government to work on solving the problem, by increasing the staffing of agencies tasked with the asylum process, coordinated placement of these people “based on population and wealth” of various regions, and improving aid in language training and access to social services. The government has also partnered with the private sector to encourage the assimilation of these refugees through a program described as “Willkommenskultur,” or “welcome culture.”

Still, as Rogers points out, to some degree (though clearly less than in the U.S.) these new German residents find themselves targeted by right-wing groups for harassment. Some employers have even gone so far as to deliberately separate these new German residents from “right-wing employees.” There are also problems inherent in a system which is slow to grant these people legal status, i.e., a “path to citizenship” once touted by both major political parties in this country but now seemingly permanently disfavored by Republicans. Ultimately, though, the distinction between the German approach and that of the U.S. is one of attitude. The Germans have welcomed these migrant refugees because they recognize that their productivity—and particularly their taxes—will provide value over time to strengthen a German social safety net threatened by an aging, retiring population.

That is the reason that the vast majority of these refugees enjoy, as Rogers notes, “the continued support for migrants among ordinary Germans.”  Although far-right parties have enjoyed a resurgence in Germany, their political system is pluralistic enough that the xenophobia and hatred spewed by AfD (Germany’s closest analogue to what the American Republican Party has become) cannot command anything close to a majority of the popular vote (AfD garnered 13% of the vote in Germany’s last election).

Put more simply, the Germans chose to face their fear and see through it. In this country it is virtually impossible to find a news report which even acknowledges, let alone credits, immigrants for what they actually do for us: the many jobs which Americans simply will not perform, such as elder care, agricultural work, in house-cleaning, construction, hospitality and food service industries. It is never mentioned that the entire service economies of states like Texas and Arizona would collapse without the labor performed by undocumented immigrants, and the fruit and vegetables we routinely expect from California and elsewhere would not be arriving at our supermarkets.

Likewise because of the prevalence of the Republican Party—a party now ideologically to the right of Europe’s most xenophobic, racist and nationalist parties—it is almost unheard of to speak of immigrants as anything other than a “problem” to be solved, rather than an opportunity to expand the inherent wealth of this nation, increase its tax base, or God forbid, contribute to its cultural diversity.That doesn’t mean “open borders” or allowing unfettered immigration; it means expending the resources necessary and treating people not as pariahs but as an investment in the nation.

The refugees at our southern border are neither a “crisis” nor a threat. They are simply the latest bogeyman in a long line of fearmongering from a Republican Party that has shown itself with nothing to offer Americans besides cynical and bogus appeals to their worst instincts.