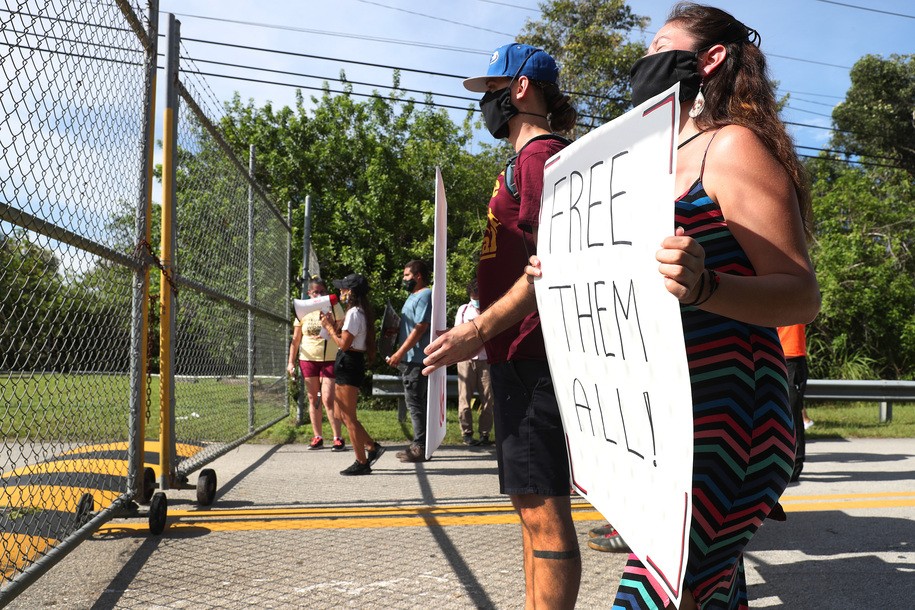 The number of people locked up in Immigration and Customs Enforcement (ICE) detention is right now at its lowest in two decades. That’s a good thing. But due to very lucrative agreements, private prisons contracted by the federal government to detain immigrants are getting paid for thousands of empty beds anyway. “At the median rate of $75 per bed, the estimated daily cost to taxpayers for these empty beds is $1.34 million per day,” NPR reports.

But the solution here isn’t to fill these empty beds back up. Nope, no way. Instead, advocates say that this lower capacity shows that the federal government has every ability to steer away from the use of mass detention. “Critics say this isn’t just about money but about the morality of putting immigrants behind bars for civil violations,” the report said. “Many ICE detainees have not been convicted of any crimes.”

As many as 80% of immigrants detained by ICE are held by private prison companies like GEO Group and CoreCivic, and because of guaranteed minimums in their contracts, they get paid whether many beds are filled or not. “In 47 facilities with guaranteed minimums, there have only been about 11,100 full beds on average each day this fiscal year,” NPR reported. “That would leave taxpayers paying for about 17,900 empty beds.”

ICE currently has about 11,000 people in detention, due to a combination of novel coronavirus pandemic limits and new guidelines from the Biden administration. But as advocates point out, if ICE can go from a record 55,000 people to 11,000 people, it can keep going lower. If it can keep going lower when it comes to mass immigration detention, it can also end the use of private immigration prisons altogether.

“I think that’s a real question for the administration,” Detention Watch Network executive director Silky Shah said in the report. “Do they want to continue to detain people because of what the Trump administration put in place? Or do they want to actually move towards the more morally appropriate position of actually not detaining tons of people.” The group released a devastating report last year finding that ICE actually worsened the pandemic by refusing to release larger numbers of detained people.

Government watchdog reports have as recently as this month detailed abusive and harmful conditions at private immigration prisons operated by the likes of GEO Group. In Arizona, an investigation by the U.S. Environmental Protection Agency found that the company violated the law by misusing a toxic pesticide that sickened immigrants detained at one facility in southern California and left them with nosebleeds, burning eyes, and breathing issues, the Los Angeles Times reported.

Arizona Congressman Raúl Grijalva last month reintroduced legislation that would ban federal contracts with private prison profiteers, as well as end immigrant family detention. While President Joe Biden issued an executive order phasing out the government’s use of private prisons, it didn’t apply to private immigration prisons, a critical omission that affects thousands. Advocates have since urged the president to include ICE facilities in his order.

“ICE detention is designed to dehumanize and to profit off of predominantly Black, Brown and Indigenous people,” said Laura Rivera, an immigration attorney and director of the SPLC’s Southeast Immigrant Freedom Initiative. “And it’s clear that private prison companies have created perverse incentives to incarcerate as many immigrants as possible, for as long as possible. What’s more, ICE’s history of impunity has allowed the private prison companies ICE contracts with no escape accountability and public oversight. This is an irredeemable, profit-driven racket that the Biden-Harris administration must address.”