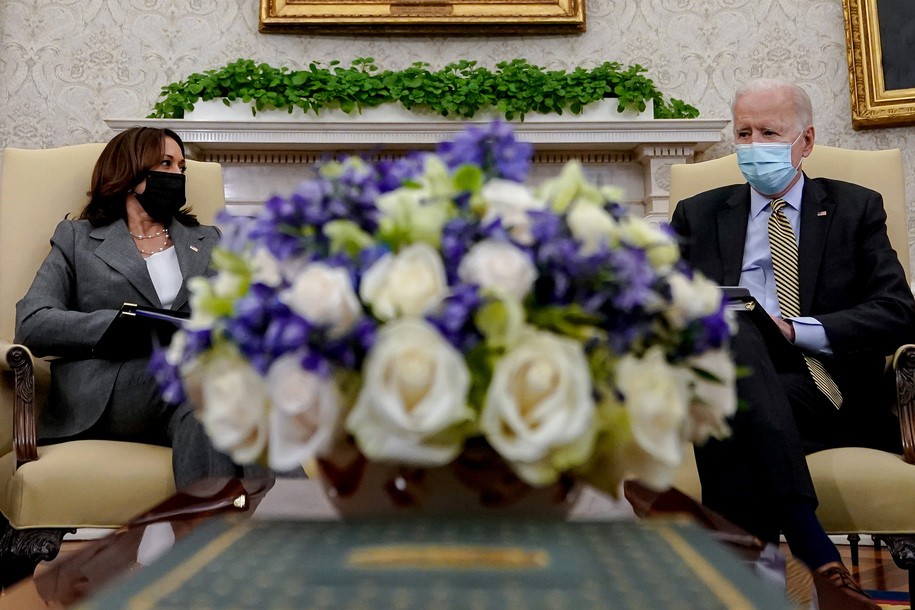 President Joe Biden on Friday released an initial budget request to Congress that will seek funds to address his administration’s new priorities within the Department of Homeland Security (DHS). These funds range from a backlog of asylum applications to caring for unaccompanied children to higher educational barriers facing undocumented young immigrants protected by the Deferred Action for Childhood Arrivals (DACA) program, as well as funds to investigate white supremacist beliefs within federal immigration agencies.

The request “is basically a preview of the full budget request coming in May,” tweeted American Immigration Council’s Aaron Reichlin-Melnick. “First, Biden’s budget proposes an overall $52 billion DHS budget, which means no cuts to the overall budget. One highlight? The budget calls for funding for a ‘humane and efficient immigration system.’ Very different from Trump’s enforcement focus.”

Biden’s request to lawmakers will include $345 million “to address naturalization and asylum backlogs” at U.S. Citizenship and Immigration Services (USCIS). Recall last year that the previous administration allowed the agency to approach the brink of having to furlough 70% of its staff due to supposed budget issues. That move would have left the self-funded agency with a “skeleton crew” and forced the nation’s legal immigration system “to a halt,” one former Obama adviser told Forbes at the time.

Biden will also request more than $4 billion for the Office of Refugee Resettlement (ORR), an agency under Health and Human Services. “This funding level would rebuild the Nation’s refugee resettlement infrastructure and support the resettling of up to 125,000 refugees in 2022, which would represent the highest number of refugees admitted to the United States in 30 years,” the White House said.

While Biden has pledged to raise refugee admissions from a record low set by the previous administration, he has not yet actually signed the necessary paperwork, leaving thousands of refugees in limbo and officials and advocates perplexed, CNN reported. “The nine resettlement agencies, along with Refugee Council USA, urged Biden to sign off on the higher cap Friday, calling it ‘imperative,’ according to a letter addressed to the President and shared with CNN.”

ORR also shelters unaccompanied minors, and the administration said the request “reflects a commitment to ensuring unaccompanied immigrant children are unified with relatives and sponsors as safely and quickly as possible and to providing these children with care and services that align with child welfare best practices while they are in ORR’s custody. Such services would include expanded access to counsel to help children navigate complex immigration court proceedings.” CBS News reports that “[t]o reduce U.S.-bound migration from Central America, the State Department would have $861 million to finance efforts to mitigate corruption, violence and poverty in the region.”

“In addition, the discretionary request redresses past wrongs by providing resources for critical supportive services—including trauma and mental health services—to children cruelly separated from their families under the previous administration,” the White House continued.

“The request submitted to Congress does not include any funds for wall or barrier construction along the U.S.-Mexico border, which Mr. Biden halted on Inauguration Day,” CBS News reported. “In fact, the plan calls for unused border wall construction funds allocated in 2021 to be cancelled.” Laiken Jordahl, an environmental activist who has been documenting the massive damaged caused by both the wall and its construction, called it “big news.” He said: “[n]ow @POTUS must keep his promise to cancel all existing wall contracts & work to heal all Trump destroyed.”

And speaking of the former occupant of the Oval Office, the Biden administration also requests funds to ”ensure that DHS workforce complaints, including those related to white supremacy or ideological and non-ideological beliefs, are investigated expeditiously.” Anti-immigrant hate groups had more than a direct line to the Oval Office, they had someone in there in the form of former White House aide Stephen Miller. “Since stepping into this position, he has been the driving force behind many of the administration’s draconian immigration policies,” the Southern Poverty Law Center said. “These policies demonstrate the significant influence that anti-immigrant hate groups have had on Miller.”

“The topline proposal does not, however, offer details on how much of the $52 billion the White House is seeking for ICE detention or enforcement operations,” the #DefundHate campaign said in a statement received by Daily Kos. “Real solutions must be based on our values of dignity, freedom, and humanity for all. Time and time again we have seen that bigger budgets for ICE and CBP do not result in better conditions, but rather expose that these agencies are fundamentally flawed. All eyes are on President Biden to do what is right. It’s past time to cut funding to ICE and CBP and protect all immigrant communities.” Read the full Biden administration request here.