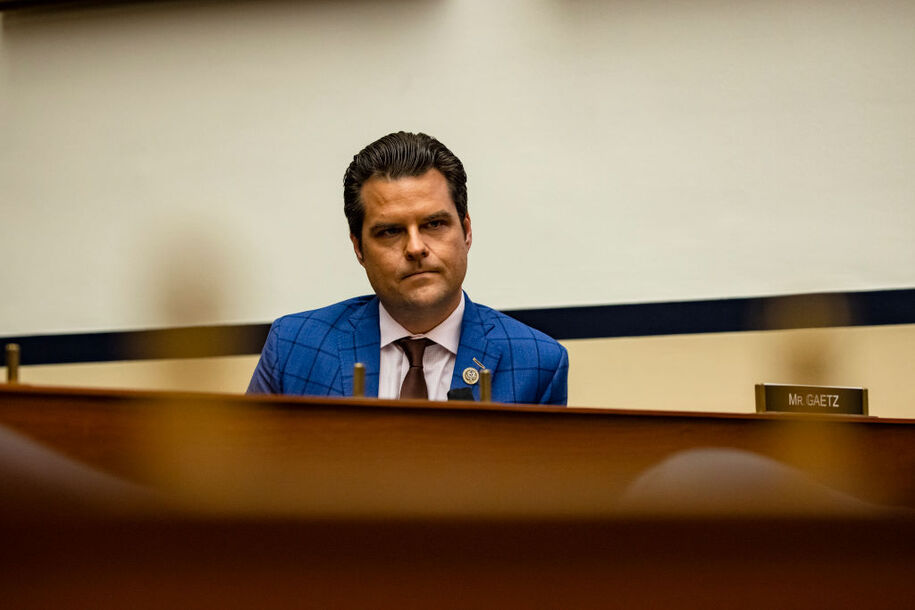 Rep. Matt Gaetz really shouldn’t have time to analyze the media interviews of Transportation Secretary Pete Buttigieg. But apparently, where there’s a will to deflect, there’s a way. Averting focus from what NPR called “a recent flurry of accusations” from illegal drug use to sexual misconduct, the Florida Republican tweeted not about the impending House Ethics Committee investigation he’s facing but about Buttigieg correctly concluding that systemic racism didn’t exclude the U.S. transportation system.

In an exclusive interview last week for the Black news and opinion site theGrio, Buttigieg said the president’s $2 trillion jobs and infrastructure plan focuses on roads and infrastructure in Black communities because those are the very communities purposefully shut out of desirable areas through transportation planning. “Often this wasn’t just an act of neglect. Often, this was a conscious choice,” Buttigieg said. “There is racism physically built into some of our highways, and that’s why the jobs plan has specifically committed to reconnect some of the communities that were divided by these dollars.”

Gaetz’s response was a tweet on Saturday claiming that the former South Bend, Ind. mayor didn’t know what he was talking about despite numerous sources supporting his assertion. “Mayor Pete well aware that he didn’t get black votes in the 2020 primary……..so now highways are racist???” Gaetz tweeted. He added on Sunday an answer to his question: “Highways are not racist.” Yes, in fact, they are.

Businessman Chris Ledford highlighted one example on Twitter in architect Robert Moses, who was trending much of the day on Sunday. He “famously built the bridges across the parkways connecting New York City to Long Island beaches too low for city buses to pass underneath so black people would have a hard time getting to them,” Ledford said.

If you knew a thing about Mayor Daley & the Dan Ryan Expressway; St. Louis/Hwy. 40 & Mill Creek; Robert Moses & NYC; or any # of other examples, you wouldn’t tweet such asinine things. https://t.co/o8l4Onw6Rx

He said Moses created the South Bronx by “plowing the Cross Bronx Expressway through established neighborhoods” and he tried to do the same thing in Greenwich Village. “Mayors cowered in his presence because he could not be fired from his many jobs & had his own massive revenue stream as chair of the TriBorough Bridge Authority,” Keefe tweeted.

Let me explain further that I decided to become a journalist at age 14. I was a news photographer, a reporter, a TV anchor. Later in my career, I was inspired to become an investigator, to hold the powerful accountable, to unearth systemic an institutional failures.

Filmmaker King Williams said in a Twitter thread that Moses, known as “The Power Broker,” held 12 different government titles at the same time. “He was:

5) also is a modern archetype of the ‘pro-business’ politician,” Williams tweeted.

with the stroke of a pen Robert Moses helped create the desolation that plagued the south bronx for GENERATIONS by LITERALLY building an expressway through it. https://t.co/YLlNOyRZxs

In keeping with the racist history, Gaetz didn’t even have the decency to credit the Black journalist whose interview with Buttigieg gave him the timely distraction. Gaetz instead included in his tweet a link to a Washington Examiner article describing Buttigieg’s interview with journalist April Ryan.

In the interview, Ryan asked Buttigieg where he sees dollars for construction going under President Joe Biden’s jobs plan. The transportation secretary explained that billions of dollars intended for construction would be divided equitably. “Sometimes you hear folks say, well, look, we tried to find a Black business to bid on this project, but they just weren’t out there,” Buttigieg told theGrio. “Well, if that’s actually true, we got to take responsibility for why they’re not out there and build more businesses up that maybe exist but they haven’t been certified.

“Maybe they haven’t been big enough to get the bonding or go through these hoops to even have a shot. They’re bidding on a federal project. We’ve got to work on all of that.”

Biden’s plan includes $20 billion to “reconnect” isolated communities overlooked in transportation projects and $40 billion to upgrade research infrastructure, half of which will be reserved for Historically Black Colleges and Universities and other Minority Serving Institutions.

The plan even identifies a specific Black community—Amy Stelly’s Tremé neighborhood in New Orleans—which has a highway cutting directly through it, The Washington Post reported. “Nobody thinks you can get rid of a highway,” she told the Post. Biden’s plan does. “I’m floored,” she said.