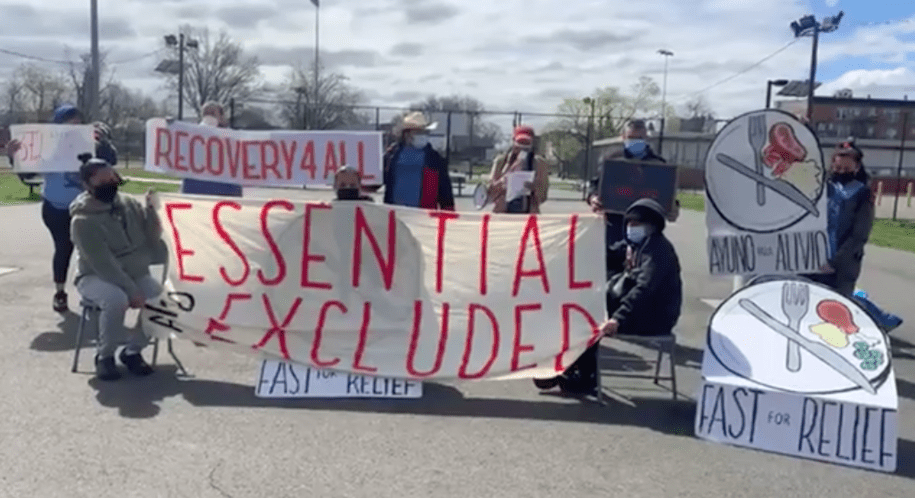 Karina Silvotti, an essential worker in New Jersey, said she’s “worried night and day” about what would happen if she gets sick while on the job as a cashier at a grocery store. Karina lacks legal status, so she’s ineligible for federal relief despite paying into the system through her tax dollars. Those fears only escalated when her husband lost his construction work job during the pandemic.

“I’m not alone,” she writes on NJ.com. “A half-million immigrants in New Jersey—about half of whom are essential workers who have done the work to clean, cook and prepare our food during the pandemic—are excluded from all aid.” Silvotti is now among a number of essential workers in the state who have launched fasts and hunger strikes to demand state leaders finally act on relief.

Fasters and hunger strikers like Silvotti, Pedro Buitrago, and others in the state are hoping to duplicate the recent success of other hunger strikers, workers, and advocates in New York, where lawmakers last week reached an agreement on a historic $2.1 billion in pandemic relief for excluded workers, including undocumented immigrants. Hunger strikers there broke their fast after going 23 days without food.

🍽 MUST WATCH: It’s Day 4️⃣ of #Fast4Relief Hear @MaketheRoadNJ member, Águeda, heartfelt ask to @GovMurphy @NJSenatePres @SpeakerCoughlin to provide relief for those she is fasting for. As a small biz owner in Elizabeth & COVID survivor, she is taking action for a #Recovery4All pic.twitter.com/D1opZhzmAR

“Over Thanksgiving, when we wanted to have a meal together, it was difficult to have enough food to go around,” Silvotti wrote. “Presents were scarce for Christmas. We were scrambling just to pay the rent and pay for my medication, which I need to take every day.” She goes on to say that as part of her job, she “fed so many during the pandemic, but when my family was suffering, no one provided for us.”

Silvotti writes that workers and their advocates have already held dozens of rallies across the state and met with both local and federal legislators. “But still, a year later, we have nothing.”

“This week, I’m joining a fast lead by immigrant essential workers like me to demand relief,” she continues. “We can’t go on like this—now, for more than a year. You could say that I’ve been hungry for a year—and I’m making this sacrifice this week because I want to show our state what we are willing to give to have our humanity, our work and our dignity recognized.”

Our brave fasters are on Day 🖐🏽 of #Fast4Relief Carla, @MaketheRoadNJ member from Passaic, lost her job during the pandemic and is fasting to make sure #EssentialandExcluded workers are heard. “We are not asking for handouts. We are fighting for our rights as immigrants.” pic.twitter.com/OYvTkBeR4f

Dozens of others in the state, like Buitrago, have also been in ongoing hunger strikes. “Hunger doesn’t wait. Rent doesn’t wait,” he recently told NJ.com. “And if people who are here legally are in so much trouble they need help from the government, why wouldn’t we need the help too? We don’t know who to ask anymore and what road to take.” In its recent op-ed, The Star-Ledger Editorial Board urged state leaders like Gov. Phil Murphy to act. The editorial board notes Murphy “is sympathetic.” But sympathy doesn’t pay the bills.

“These immigrants did the essential work when it was needed most,” the editorial board said. “They were on the front lines at stores and restaurants and construction sites and hospitals, and their labor helped save lives while most of us sheltered in place, while facing exposure, illness, and indifference for their sacrifice if they got sick, lost their jobs, or lost their lives. It’s payback time.”

Want to help excluded workers in New Jersey? Click below and use this tool from advocacy group Make the Road New Jersey to send state leaders a message to act on relief now.

We are essential workers who put food on your plates & packages at your doorsteps. We have gone more than 1⃣ year w/o relief because we were left behind by any form of COVID aid due to our immigration status. 💥💥 Join our fight for a #Recovery4All https://t.co/9bULnTSOIj pic.twitter.com/5jYfeYKvHO