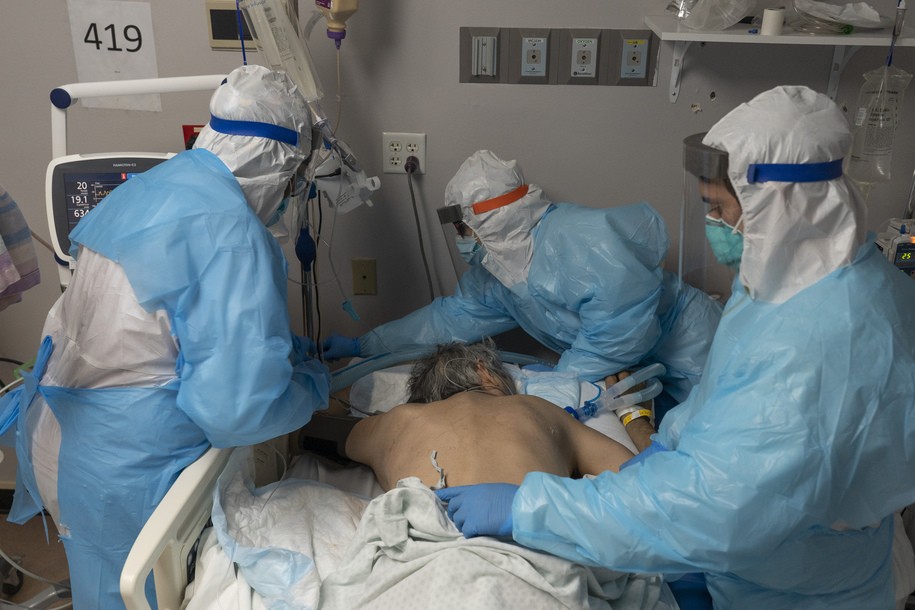 Not that it should come as a surprise to anyone, but the findings of a county-by-county breakdown conducted by The New York Times confirms that, on average, the counties with the lowest percentage of people willing to be vaccinated against COVID-19 are those counties with the highest number of Trump voters.

Worse, the numbers of people actually being vaccinated are tracking in the same direction, with people refusing to be vaccinated, even in those pro-Trump areas where vaccine supplies are plentiful.

As The Times reports:

The New York Times examined survey and vaccine administration data for nearly every U.S. county and found that both willingness to receive a vaccine and actual vaccination rates to date were lower, on average, in counties where a majority of residents voted to re-elect former President Donald J. Trump in 2020.

In rural, mostly pro-Trump counties in particular, what the media charitably describe as “vaccine hesitancy” has resulted in many counties experiencing an oversupply of the vaccine. The Times describes county health departments with freezers filled with unused vaccine doses, phone calls to cancel volunteers willing to administer the vaccine, due to lack of interest among area residents; and empty drive-through facilities optimistically constructed by hospitals to deliver as many vaccines as possible, as quickly as possible. Health officials in these same counties report they have become “weary” of hearing from local residents that the COVID-19 pandemic is just a hoax, or no worse than the “flu.”
Of course, this isn’t vaccine “hesitancy” at all. It’s vaccine obstinacy, and it’s vaccine ignorance, the predictable fallout of a year’s worth of disinformation and denial about the seriousness of this virus, beamed incessantly into red-state Americans’ heads by Donald Trump, almost all Republican elected officials, and their right-wing media mouthpieces, led most visibly by Fox News. As The Times explains, the result of this consistent, damaging narrative is that nearly half of all registered Republicans say they will refuse the vaccine. The figure for Democrats, by contrast, is one in 20.
The Times reports that health officials in these Republican counties are now struggling to cope with that fallout.

“I just never in a million years ever expected my field of work to become less medical and more political,” said Hailey Bloom, a registered Republican and the public information officer for the health department that covers Natrona County, Wyo., which Mr. Trump won by a wide margin last year.

This phenomenon of refusing the vaccine, according to The Times, is more prevalent among lower-income, non college-educated Republicans, a demographic that might be expected to be susceptible to a campaign designed to discredit medicine and science in favor of their own prejudices. But in wealthier, more educated red counties, Republicans are also refusing to take the vaccine in higher numbers than their Democratic counterparts, “even after accounting for income, race and age demographics, population density and a county’s infection and death rate.”

Estimates of the number of “vaccine hesitant” Americans were obtained from nationwide surveys conducted in March by the Department of Health and Human Services, and based on the number of individuals who responded that they would either “definitely” or “probably” not take the vaccine. And while a certain percentage of these responses were assumed to be deliberately false, reflecting a political bias, data reflecting the actual number of vaccinations continues to support a similar divide between Democrats and Republicans, at both the county and state levels. The Times also suggests that the real vaccination numbers may actually be closer to the polling numbers, based on the way the vaccines are being rolled out, namely to older individuals first. However “hesitant” they are, older Republicans are nonetheless more likely to accept the vaccine than younger ones.

The rate of full vaccination for older adults in Republican-leaning counties was 5 percent lower than the national average, the Times analysis found, but the rate for younger adults was 18 percent below average. It is an indication that the partisan divide in vaccinations may actually grow wider as younger people become eligible for the vaccine nationwide.

Republican House members who represent these voters are making the situation worse. Many still refuse the vaccine themselves, or if they do receive it, they refuse to admit or discuss it. As Paul Kane, writing for The Washington Post, explains, as the most visible political presence in their districts, they certainly have the power to influence people’s decisions on such a life-and-death matter.

But Republican lawmakers are reluctant to talk about being vaccinated.

According to estimates from GOP leaders, at least half of the 212 House Republicans received shots.

Yet just 53 Republicans would publicly acknowledge being vaccinated when CNN did an expansive survey of the House; 13 Republicans declined to get the shots, and the remaining GOP lawmakers would not comment.

Put simply, Republican elected officials have made the political calculation that not talking about being vaccinated is better for them politically, even if it means their constituents follow their example by not getting vaccinated. There is no other reasonable explanation for this nearly-collective Republican silence.

Just pause for a second and imagine what kind of people would make that calculation. You have a virus that has already killed over a half million people. You’ve been vaccinated, but you’re afraid that admitting so will hurt your career … because your constituents have literally been duped into vaccine denial by Donald Trump. So rather than do the right thing, you sit quietly and say nothing, allowing your constituents to risk getting sick, or even dying.

That takes malevolent disregard to a whole new level, doesn’t it?

This data has disturbing implications for all of us, including those of us who are getting vaccinated. The failure to vaccinate enough people in this country greatly increases the likelihood of variants, as the virus has more opportunities, and time, to mutate. That’s bad enough, but at least vaccinated folks can take some comfort in the knowledge that science is working on the problem.

But for those Trump voters who won’t take the vaccine because of something Donald Trump said, because of something he tweeted, because of something they read on Facebook, or because their own congressional representative refuses to admit he or she has been vaccinated, the future is actually pretty bleak. Many of the current vaccines have already been proven to protect against new variants of the virus, but for those who’ve never even received a dose, that fact isn’t going to make a bit of difference. They will remain uniquely susceptible to COVID-19—and whatever else comes along.

Kevin Cracknell, an R.N. in heavily pro-Trump Potter County Pennsylvania, fears a continuous onslaught of infections if his county if it doesn’t get past its currently dismal 15% rate of vaccinations. “It’s like no other virus I’ve seen in my life,” he told The Times. “The damage it does to the lungs.”

That any political party would willingly allow this to happen to its own voters would seem to be inconceivable. But that’s exactly what the Republican Party is doing.