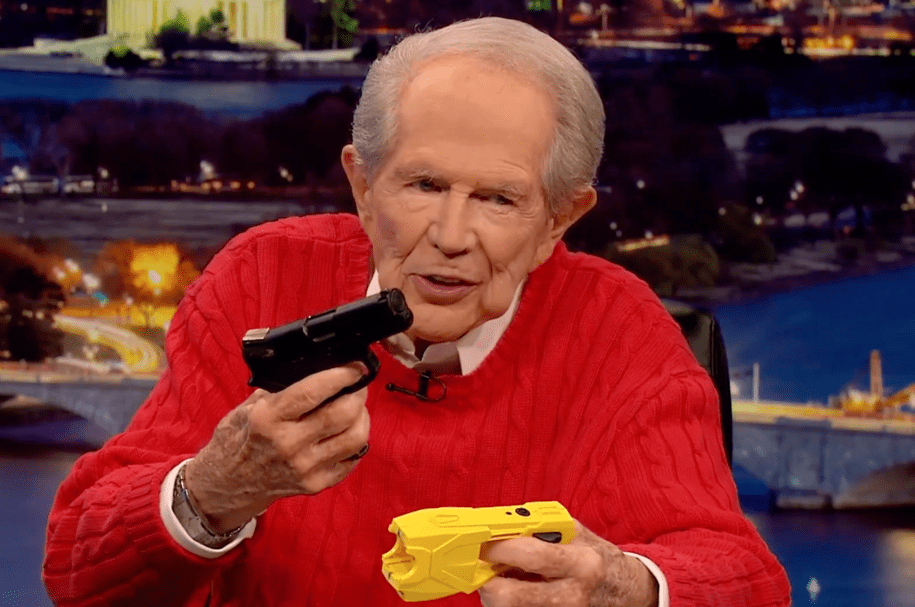 Obviously, I’m no fan of Pat Robertson, and it’s a rare occasion indeed when I agree with him. After all, he’s basically a workaday evangelical Nutter Butter, and evangelicals gave us the prank gift of Donald Trump. It was sort of like giving us all ugly Christmas sweaters as a joke, except they weren’t joking … and the sweaters were highly flammable … and yet somehow still contained asbestos … and weren’t “ugly” so much as Hieronymus Bosch-like grotesqueries that kept us awake at night as they hung menacingly in our closets, ready to choke the life out of us and end Christmas (nay, joy itself) forever.

So when Robertson starts sounding reasonable, I automatically check my surroundings to see what timeline I’m in. Maybe it’s a timeline where Trump was never actually president and Hillary Clinton is serving her second term after they finally checked Ted Cruz’s garden shed for bodies, thus abruptly ending his campaign.

But, no. We’re still in this reality, and Pat is still Pat. That said, he’s come around to stating the obvious. Discussing the police killing of Daunte Wright on The 700 Club Thursday, Pat questioned how anyone could ever mistake a taser for a gun, and he and co-host Terry Meeuwsen made some pretty good points, frankly.

Salon’s Zachary Petrizzo caught the clip. Let’s all offer up some gratitude that it’s not our job to watch The 700 Club.

When the police are starting to lose the approval of Pat Robertson, you know things are bad. pic.twitter.com/Pu7tw6aoDC

MEEUWSEN: “I think a lot of people are thinking like I was that … both the gun and the Taser would be put on your dominant side, but it’s not that way …”

ROBERTSON: “They have to cross, they have them on different …”

MEEUWSEN: “… so you actually have to reach across yourself …”

ROBERTSON: “You feel the difference. … As I say they’re not making Tasers in this yellow color anymore [sic], in black, they’re making them yellow. Now how she made the difference when she shot that poor guy to death, say, this is what I thought was my Taser, and if you can’t tell the difference in the field [unintelligible, because he’s Pat Robertson]. Anyhow, she deserves, but, you know, I am pro-police, folks. I think we need the police, we need their service, and they do a good job, but if they don’t stop this onslaught—they cannot do this. You know, the police in Virginia picked up a lieutenant in the Army and began to give him trouble, and our state police are highly trained, but why they don’t stop this—and this thing that’s going on in Minnesota, but Derek Chauvin, they ought to put him under the jail. He has caused so much trouble by kneeling on the [neck] of George Floyd. … It’s just terrible what’s happening, and the police, why don’t they open their eyes? … They’ve got to stop this stuff.”

Robertson went on to say that police departments employ too many “underpaid clowns,” and that’s why we’re seeing all these (alleged) murders. Frankly, I sometimes think kids’ birthday party clowns would do a much better job than the cops we currently have. Maybe we should try that.

So I don’t know if Robertson’s brain is glitching, making him some kind of Bizarro World Pat Robertson, or if he’s the evangelical kookaburra in the coal mine who is auguring a much more progressive tilt among others of his kind (ha ha, nope). But I do know that these killings have become so common and egregious that even dopey, bigoted fossils like Pat can see what’s happening.