‘Do you speak English?’ Minnesota cops add insult to injury when they brutalize journalists of color 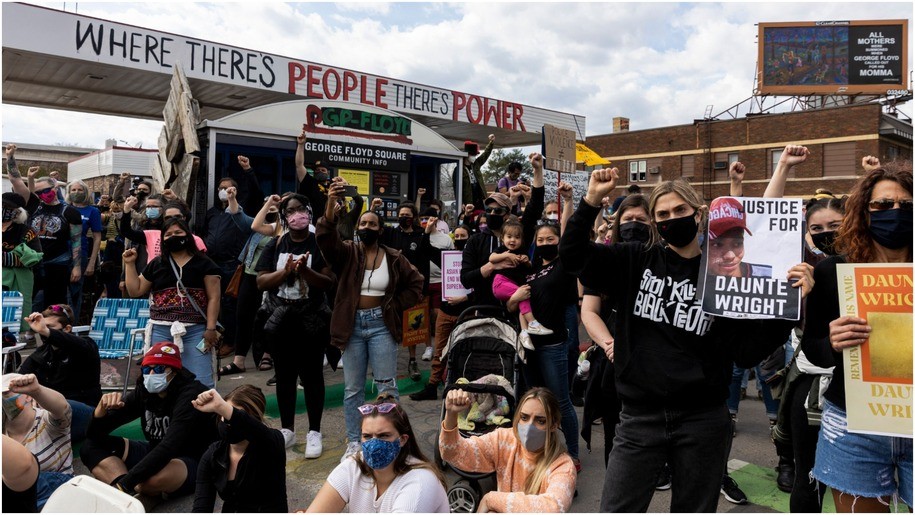 As onlookers, some hopeful some skeptical, await a verdict in the murder trial of former Minneapolis cop Derek Chauvin, outside forces in Minnesota are working just as hard as defense attorneys to peel back the liberties of people of color in multiple ways. Police intimidation, legislation, and sheer brutality are just a few. In one realm, a Republican state congressman drafted legislation that threatens to strip away access to student loans and rent assistance from protesters convicted of a crime: remember a crime could be breaking a last-hour city curfew implemented after protests even began.

Yet and still, in another realm, journalists and people of color are simply handcuffed and brutalized by cops using those curfews and other last-minute orders to carry out a racist and hateful agenda. Demonstrators in Minneapolis who protested in honor of both George Floyd and Duane Wright were arrested, and journalists of color were handcuffed all the same, no matter their titles. Joshua Rashaad McFadden is a visual artist and photographer for The New York Times, and Carolyn Sung is a CNN producer. But their accomplishments, their duty to the public to report the truth, didn’t matter to cops.

“When ⁦@joshua_rashaad, a Black photographer working for @nytimes⁩, showed officers his press credentials they didn’t believe him & struck him & his cameras. This is an infuriating reality for Black journalists covering protests,” New York Times reporter John Eligon tweeted on Monday.

“To be clear, the police have been wildly inappropriate in Minneapolis area attempting to intimidate & assault all journalists,” he added in another tweet. “It’s especially difficult for Black journalists. All this boasting about land of the free & home of the brave & this is where we are in 2021.”

McFadden told the Times police surrounded a car he was in while he tried to leave protests on Tuesday and hit his car windows with batons. At one point, they even forced the photographer out of his car, beat his legs and hit his camera lens, he said. “It was definitely scary — I’ve never been in a situation like that with so many police officers hitting me, hitting my equipment,” the journalist told the Times. He described the situation as “extremely frustrating” and said it took another photographer backing him up for police to believe he was a credentialed member of the media.

In another case involving a New York Times photojournalist on Monday, Brooklyn Center police reportedly left a burning red ring around the face of a reporter covering protests when an officer sprayed a chemical agent from about four feet away from the journalist. And in Minneapolis, a state police captain recognized a journalist, grabbed him behind a police line and took his phone, according to a letter from several media outlets documenting the brutality. “When the journalist asked ‘why,’ the officer said: “‘Because that’s our strategy right now,'” media officials said in the letter.

CNN anchor Brian Stelter tweeted the letter on Sunday addressing Gov. Tim Walz, Commissioner John Harrington, and officials from the State Patrol and Department of Corrections. Stelter spotlighted an incident of police brutality involving Sung. Journalists said in the letter she was accused of failing to comply with a dispersal order and “thrown to the ground” in a violent arrest while trying to leave a protest Tuesday night. “Despite repeatedly hearing Sung identify herself as a member of the press and tell the troopers that the zip ties were too tight on her wrists, one trooper yelled at Sung, ‘Do you speak English?'” journalists said in the letter. Sung, whose primary language is English, was taken to Hennepin County Jail, where she was subjected to an invasive pat-down that meant a female officer’s hands down her pants and in her bra. The producer was forced to strip, fingerprinted, and made to wear an orange uniform in an arrest that took more than two hours, journalists said in the letter.

CNN producer Carolyn Sung was wrongfully arrested by Minnesota state troopers on Tuesday night. This letter from a group of media outlets describes how she was mistreated and held for more than two hours pic.twitter.com/2OqXWrN55G

Minnesota Gov. Tim Walz made a statement on Sunday in response to the many reports of journalists being targeted by police. “Apologies are not enough; it just cannot happen,” he said. “I think we all need to recognize the assault on media across the world and even in our country over the last few years is chilling,” Mr. Walz told a local CBS affiliate. “We cannot function as a democracy if they’re not there.”

In addition to the cruelty the journalists faced, if journalists like Sung and McFadden were Minnesota residents convicted of the offenses they were accused of, proposed legislation sponsored by Minnesota Sen. David Osmek would further aid in stripping them of their constitutional rights.

Osmek used this language in the bill originally reported by The Minnesota Daily:

“A person convicted of a criminal offense related to the person’s illegal conduct at a protest, demonstration, rally, civil unrest, or march is ineligible for any type of state loan, grant, or assistance, including but not limited to college student loans and grants, rent and mortgage assistance, supplemental nutrition assistance, unemployment benefits and other employment assistance, Minnesota supplemental aid programs, business grants, medical assistance, general assistance, and energy assistance.”

It is one of 220 bills drafted across the country with the aim of restricting the right of Americans to peaceful assembly, according to a database maintained by the International Center for Not-for-Profit Law. Of the bills and orders, 28 have already been enacted in Arkansas, Indiana, Kansas, Kentucky, Louisiana, Mississippi, Missouri, North Dakota, Ohio, Oklahoma, South Dakota, Tennessee, Texas, Utah, West Virginia, and Wisconsin. Many of the enacted bills attach felony charges and fines to protesting near critical infrastructure or redefine protesting as inciting a riot. A South Dakota bill redefines “riot” as “any intentional use of force or violence by three or more persons, acting together and without authority of law, to cause any injury to any person or any damage to property.” The new felony offense could come with up to five years in prison and $10,000 in fines, the law organization reported.

In a similar legislative move, Florida Gov. Ron DeSantis signed a new bill into law on Monday to dissuade protesters by deeming protesting a felony offense in some cases and allowing law enforcement officials to hold demonstrators until their first appearance in court, NBC South Florida reported. Micah Kubic, executive director of the ACLU of Florida, responded with the following statement:

“Let’s be clear: this is not an anti-riot bill, regardless of what supporters claim. It is a bill that criminalizes peaceful protest, and the impact HB1 will have on Floridians cannot be disputed. Each and every provision harkens back to Jim Crow. Constitutional lawyers and scholars have called the bill overbroad, vague, and warned it will chill free speech. Protesters could be arrested and charged with a felony if others at a protest or gathering became violent or disorderly, even if they themselves didn’t.”

Kubic later added: “Every single Floridian should be outraged by this blatant attempt to erode our First Amendment right to peacefully assemble. It is outrageous and blatantly unconstitutional.” Worse yet, Republican lawmakers are trying to ensure the violations happen throughout the country.

RELATED: Same Republicans peeling back rights of Black voters want them treated as gangs when they protest