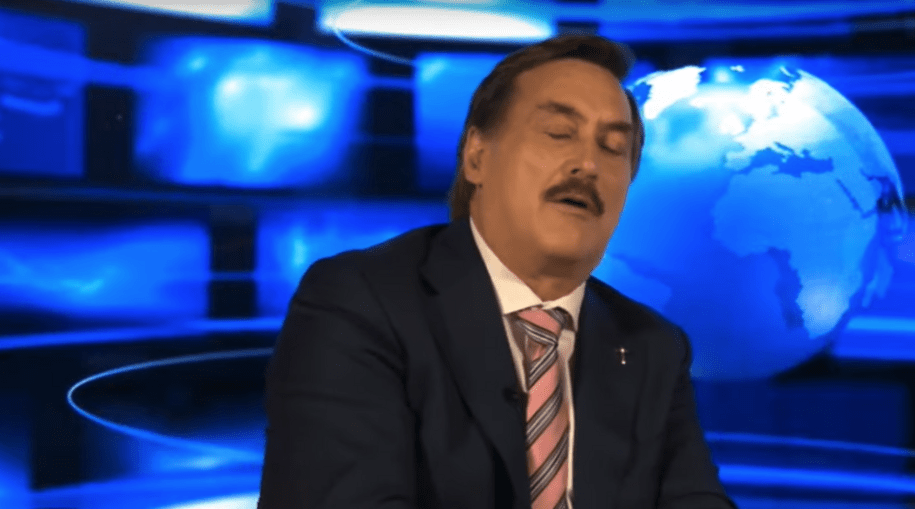 MyPillow CEO Mike Lindell has been having a rough go of it. Hitching your huckster caboose to the Trump-train and riding it off the tracks into the land of baseless election fraud claims has led to big losses for the conservative former business fraud-settler. His most recent move is the promise of launching his own social media platform called FRANK. This is the website social media thingy Lindell has been promoting for the past couple of weeks; the “free speech” platform with a list of censored words and things you cannot talk about. True story.

On Monday, Lindell attempted to hold a 48-hour “FRANK-a-thon” event to support this launch. The event is streaming live on YouTube and last I looked, about 30 people were watching it. He launched it with the news that he was countersuing Dominion, which is suing him for defamation. If you thought watching a two-minute segment of Lindell was 119 seconds too long, wait until you get a load of five minutes!

Salon writer Zachary Petrizzo has been live tweeting this train wreck of a situation, which included the platform being completely unavailable at launch. But a highlight came a couple hours into the event while Lindell was interviewing a COVID-19 skeptic who has also been “canceled” by “cancel culture.” In the middle of the interview, Lindell looked at his phone and seemed to believe he had a special guest: twice impeached, one term, buried under lawsuits former president Donald Trump! What a get! Well … get ready for the best thing on the internet today.

While Lindell leaned over, groveling into his phone, we all get to hear what sounds like Trump saying, “Hello everyone.” Lighting up like a true heel, Lindell ebullient tells his FRANK-a-thon audience: “We have the president here, the real president everyone. Hello Mr. President.” Very quickly, it becomes clear that the caller is someone promoting their own website and using some foul language. Lindell quickly hangs up his phone and tells his audience that like his website, this is all a part of the infiltration of the amorphous powers that be trying to take down his “free speech” platform. (The one that promotes only speech that Lindell likes.)

Mike Lindell was just duped into thinking Trump was calling into the program. pic.twitter.com/VUMy1etNA3

This couldn’t happen to a nicer guy.