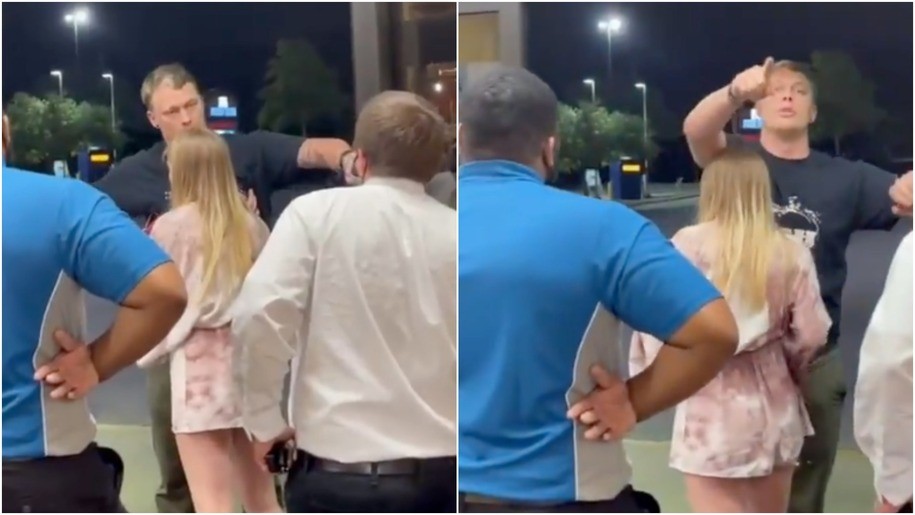 A former drill sergeant leader in the U.S. Army was caught on camera in a racist rant proclaiming “Black lives don’t f—ing matter.” The slight that sent John Miles—initially identified by local newspaper Sumter Item—into the fit of rage was reportedly a grocery store clerk refusing to sell alcohol to him. “John Walter Miles, 27, of Sumter, was shopping with his girlfriend when the disturbance happened,” the Sumter Police Department said in a statement on Facebook Thursday. “Based on information gathered in the case, Miles became irate after a clerk refused to sell alcohol to the couple.
“Miles is charged with aggravated breach of peace and trespassing. He was booked at the Sumter County Sheriff’s Office Detention Center. An investigation is continuing.”
Facebook Content

The incident captured on the social media app TikTok happened after 10:15 PM on April 9 at a Food Lion in South Carolina. Miles could be seen in the video facing off with a store employee, a person recording him, and another unidentified official on the scene. His girlfriend positioned herself in front of Miles, seemingly trying to calm him down. It didn’t work. “Guess what?” he asked. “All lives f—-ing matter. Black lives don’t f—-ing matter.” He urged the person recording to make sure she got it, then continued with his rant.

“Take this on your f—–g recording,” Miles said. “Black lives matter is the most racist f—ing thing we’ve ever f—ing seen. All right, all lives matter.” At one point, the automatic store doors Miles was standing in between started to close, and he forced them back open and started to walk toward the person recording.

After his lengthy speech, which police officers said happened while Miles was under the influence of alcohol, Miles claimed that he wasn’t racist. “So all of you Black f–ks, okay, guess what? I got a god–n Black kid in god–n Georgia. I’m not a racist motherf—er,” Miles said.

Saw this on TikTok last night. John Miles of the @USArmy pic.twitter.com/qZ5nCtEauk

Leslie Ann Sully, a spokesperson for the Fort Jackson U.S. Army installation and training center in South Carolina, told Daily Kos in an emailed statement that Fort Jackson “is aware of the video on TikTok and the person in question is no longer in the Army.”

“He was already out of the Army at the time of this incident,” Sully said.

The video follows heightened media attention to racism and excessive force allegations tied to race after the death of George Floyd, a Black father killed when a white Minneapolis cop kneeled on his neck for more than nine minutes. That cop, Derek Chauvin, was convicted of murder on Tuesday, but at the time of the incident involving Miles, the trial was still underway.

Brig. Gen. Milford Beagle Jr. added in a statement on Facebook: “This type of behavior is not consistent with our Army Values and will not be condoned. We have begun our own investigation and are working with the local authorities.”