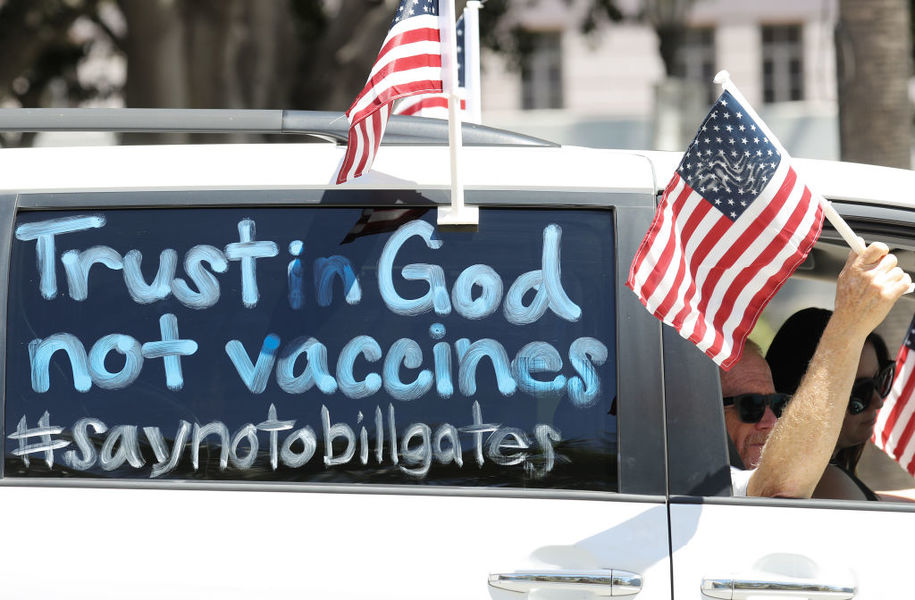 The millions of Trump voters who have thus far refused to be vaccinated against COVID-19 want us to know that we’re going about it all wrong if we want them to get the shot.

They’re tired of being “bullied,” they say. Besides, as one says, they haven’t gotten sick (yet) despite being “out and about” the entire pandemic. There’s just too much information out there to trust anyone, another says. Most of them are going to get themselves a fake vaccination card, anyway. And if you ever want the slightest, barest chance of them getting that COVID-19 vaccine, whatever you do, don’t mention Dr. Anthony Fauci.

If they take that vaccine at all, it will only be after the country falls over itself, bending backward to persuade them. And even then? They’re probably not going to take it anyway. As conservative Jennifer Rubin, writing for The Washington Post, observes, “The number of those who do not want the vaccine (roughly 20%) has been immovable since January, suggesting these people—which includes as much as 40% of Republicans—are impervious to reason and facts.”

Perhaps, then, it’s time we stop catering to them.

After Donald Trump was elected in 2016, there was a lot of finger-pointing—much of it, such as the “economic anxiety” trope, horribly off the mark—the product of a media tendency to find rationality where there really is none to be found. Adam Serwer, writing for The Atlantic, came closer to reality in his landmark 2018 essay, “The Cruelty is the Point.” But there was another prominent feature of these millions of Americans who decided to waste their sacred right of franchise on someone as utterly unqualified as Trump: a plain, heedless lack of any interest or concern for the rest of us.

As observed by The Washington Post’s Charles Lane in early 2016, before most in the media gave Trump a chance in hell to actually win, his campaign was seen as a chance for some of the most self-absorbed and ignorant people in our country to send a message. A message that ensured they’d receive the attention they knew they were due. They’d burn it all down for no better reason than to watch the flames.

Incoherent though it may be, there is no denying the power of the animus propelling what can only be called the Trump movement; as O’Reilly says, “they want someone to blow that system to hell.”

These are the same people who now believe the 2020 election was stolen because they can’t wrap their minds around the fact that a majority of Americans could possibly disagree with them. They’re the people who cheered when an incoherent mob led by white supremacists sacked the U.S. Capitol on Jan. 6. They’re wrapped up in their own self-importance, and irredeemably hooked on their Fox News intravenous grievance feeding tube. So it was just a small step to dismiss the worst public health crisis to hit this country in over a century as a “hoax,” and then to dismiss the vaccine as a conspiracy. Of course, they were encouraged and empowered in this by Donald Trump, one of the more successful con artists in history and the worst, if not the first, of his breed ever to occupy the Oval Office.

And now they’re digging in. They aren’t going to get that hoax vaccine—ever. It’s now become a point of pride among them. It may be an ignorant point, and most of us rightly would call it selfish and self-destructive, but that’s where they’ve chosen to make their stand.

Although more than half of U.S. adults have received at least one dose of coronavirus vaccine, more than 40 percent of Republicans have consistently told pollsters they’re not planning to be vaccinated — a group that could threaten efforts to tamp down the virus’s spread, public health officials fear.

Excuses for refusing the vaccine are ubiquitous on the internet and social media. For some it’s a harbinger of totalitarianism; for others it’s tantamount to some billionaire’s master plan to inflict either genocide or social control, depending on who you talk to. For religious zealots, it’s the mark of the Beast in the book of Revelations. But do 35 million Republicans actually ascribe to these conspiracy theories? Or is there something a little more basic that’s driving them?

Republican pollster Frank Luntz conducted a focus group of Trump-voting vaccine “skeptics” to try to fathom what was driving their obstinacy. What he found was that the latest excuse among many of them is an amazing newly minted distrust of corporate motives, evidenced by the Pfizer CEO Albert Bourla’s recent concession that booster shots may be required to ensure the vaccine’s effectiveness.

Presumably this person has never received a flu shot, which people get every year.

When reminded that Trump himself had been vaccinated, most members of the focus group shrugged that off. “I’m very thankful to Donald Trump, but all his efforts to make it happen don’t have anything to do with its continued or long-term efficacy,” one said. Left unsaid was the fact that this person, even after Trump’s prolonged, highly publicized months-long campaign to create and distribute these vaccines, wasn’t going to get jabbed anyway. Now it appears he’s simply latched on to the excuse of having to get a booster to further justify his denial.

One “bullied” woman complained of “being humiliated, basically” by the media, presumably by challenges to her anti-vaccine sentiments. The same vaccine-denying woman declared she saw no reason to change her position until the “media” grew more to her liking.

This is all very telling. But even more telling is one particular response from people assured of their continued anonymity.

The focus group revealed another unexpected development: Most participants said they would want a fake vaccination card that would allow them to claim they had received shots, after Luntz granted them anonymity to speak honestly.

The same group told Luntz they would use fake vaccine cards to attend concerts, baseball games, and other events where they might need to be vaccinated.

In her op-ed in the Post, Rubin, reviewing the same data, comes to one conclusion: “Given the existence of such self-destructive, selfish and potentially deceitful people, secure vaccine passports are warranted.”

At some point, only the willfully ignorant and destructive will remain unvaccinated. Once that happens, employers, retail establishments, entertainment venues, public buildings, public transportation, colleges and (when vaccines are approved for children) K-12 schools should insist that people present a secure form of proof of vaccination before entering.

Other initially “vaccine-hesitant” groups—notably Black Americans—have come to recognize the safety and value of these vaccines, particularly after receiving the reassurance of trusted medical professionals, and in light of the way the COVID-19 pandemic has disproportionately ravaged their communities.

The Biden administration is acutely aware of the problem. On April 5, the administration announced a mammoth advertising campaign supported by 275 organizations in an effort to combat “vaccine hesitancy” among those groups most likely to refuse the vaccine. The advertisements have been running all month, with a cast of supporters that, as The New York Times reports, include “health professionals, scientists, community organizations, faith leaders, businesses, rural stakeholders, civil rights organizations, sports leagues and athletes.” Still, one study has predicted that within two to four weeks, enthusiasm for the vaccine will reach a “tipping point” where demand for the vaccine is outstripped by the supply. After that point, the effort to vaccinate the nation will become significantly more challenging as the focus shifts to the “holdouts.”

And this is where we come back to the original mindset of these Trump voters. Nowhere in Luntz’s focus group is the slightest hint or acknowledgment that they risk infecting others with their behavior. Forget about herd immunity, forget even about their own health—these people obviously don’t even care what happens to their neighbors and friends, let alone society at large.

Luntz correctly notes that Trump allowed this type of mentality to fester by downplaying and politicizing the pandemic. He suggests that based on these responses, physicians should try to incorporate questions about vaccination status into regular health examinations of these people, but warns that hectoring and ridicule heaped on these folks by “some Democrats” may end up backfiring. Republican officials, present during the focus group sessions, tried to use political messages (such as expressing support for Donald Trump) to convince participants to take the vaccine. These appeals, as Diamond’s article observes, left them largely unmoved.

Ultimately, it appears that this vaccine refusal phenomenon is little more than a red herring, an extension of the same selfishness these people exhibited when they voted for Trump in the first place. For some of them, it may feel like their own personal revenge on the country for Trump losing the election, just like 2016 was their personal revenge for the election of a Black president—twice.

Whatever their claimed motives are, those who refuse to get vaccinated don’t deserve a pony, and they don’t deserve to be coddled for their ignorance or their obstinacy. Thanks to Trump and Fox News, they don’t believe there are any personal health consequences to the virus. And they certainly don’t care about how it might impact anyone else. The only thing they might care about is if their continued refusal caused some real inconvenience in their own lives, and they’re already planning a workaround. That doesn’t mean that the government should force them to get vaccinated. It means, as Rubin points out, they shouldn’t be rewarded for their obstinacy by being allowed to enjoy all the same privileges for which we’ve all waited over a year.

There is no right to remain a breeding ground for dangerous coronavirus variants or a threat to the small number of people still susceptible to the virus despite their vaccinations (known as breakthrough infections). The country is approaching the point when it should stop catering to those bent on being a danger to themselves and others. We have all sacrificed too much for too long to indulge reckless conduct.

The efforts being made by the administration and private interests to get people vaccinated continue to be heroic, boosting enthusiasm for the vaccine among many groups. Incentives such as providing the vaccine during routine medical appointments and having employers arrange for on-site vaccinations draw favorable reactions from significant percentages of the holdouts. Those efforts, and others, should continue.