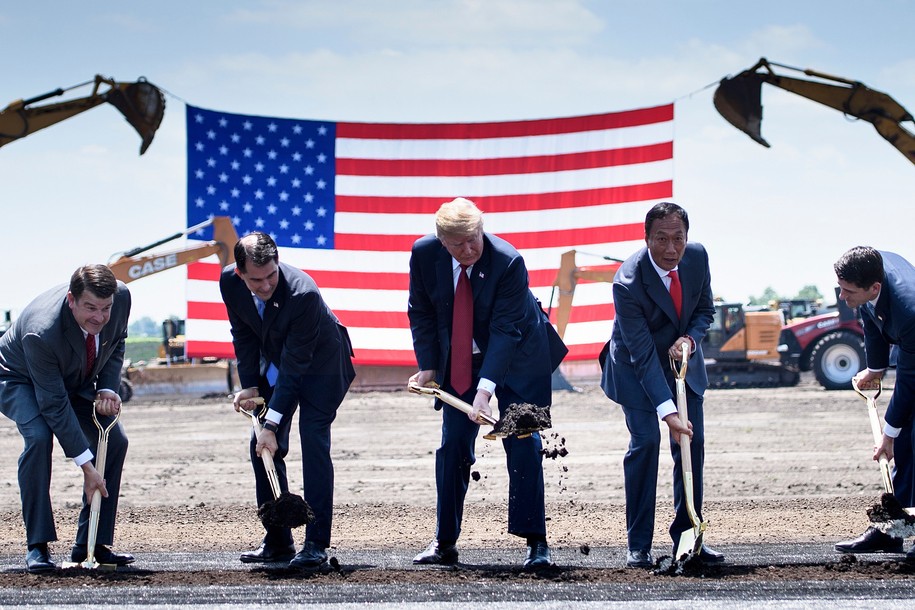 In the summer of 2017, the newly elected Donald Trump and Wisconsin’s soon-to-be-former governor Scott Walker announced the big deal that only Republican leadership could strike: Foxconn was coming to build manufacturing infrastructure in the Badger state! The promise to the American public was that this would mean more than 13,000 new jobs building LCD screens. The moment anyone took even the most cursory glance at the details of this mega-deal, it became instantly clear that it was bad news for the state of Wisconsin. With billions in corporate tax breaks and environmental regulations waived, estimates predicted that Wisconsin would be mired in 25-years worth of debt.

By the end of the summer of 2019, it became clear that the deal was not going to play out even close to how it had been presented to citizens. The promised 13,000 jobs had dwindled to something around 1,000 jobs. The big LCD manufacturing plant touted by Trump, Walker, and Foxconn’s CEO Terry Gou never materialized. Wisconsin and Foxconn found themselves in a long renegotiation of the deal that neither of them wanted. Foxconn realized that while they were being offered billions in tax subsidies, the deal wasn’t the best business move for the company, and it wanted to try and squeeze out millions in tax payouts, while providing next to nothing. Wisconsin, hoping to save something from Scott Walker’s disastrous dealings, was hoping to at least come away with some working presence of the company in the state.

This disastrous boondoggle has dragged on into 2021, but a deal has reportedly been struck. Hold onto your seats, as it turns out that Donald Trump, Scott Walker, and the Republican Party lied to workers.

The Wall Street Journal reports that “Foxconn is scaling back plans” of investing $10 billion into the Badger state. How much will they be “scaling back?” Oh, no less than nine-billion, two-hundred-twenty-eight million dollars back. CNN and the WSJ report that the Wisconsin Economic Development Corp. and Foxconn had signed a “revised incentive deal outlining a $672 million investment from Foxconn that will create fewer than 1,500 jobs.”

One of the reasons this took so long to happen was that when Gov. Scott Walker was defeated by Democratic challenger Tony Evers in 2018, Foxconn was still trying to pretend that while they weren’t sure what they were going to manufacture, if they were going to manufacture anything at all, they still wanted those billions in Republican tax giveaways, and continued to promise that they could figure out a way to reach the 13,000 employment numbers needed to be met by 2032. Gov. Evers and others put more and more pressure on FoxConn and the Wisconsin Economic Development Corp. to renegotiate the deal—something easily within the Wisconsin Economic Development Corp.’s power as Foxconn had already been reneging on the details of the original deal.

The new deal reportedly stipulates that if Foxconn can invest $672 million (that’s a “m” not a “b”) and create 1,454 jobs by 2025, they will qualify for $80 million in incentives. Gov. Evers says this new deal will save Wisconsin taxpayers “a total of $2.77 billion compared to the previous contract, maintain accountability measures requiring job creation to receive incentives, and protect hundreds of millions of dollars in local and state infrastructure investments made in support of the project.” Evers explained that the tax incentives in this new deal match the incentive deals offered to all companies coming to the state.

Senior economist Tim Bartik at the WE Upjohn Institute for Employment Research told CNN that the original deal’s incentive package would have paid out “conservatively” more than $200,000 per job created by Foxconn. “Typically for a new company, incentives are close to $50,000 per job. This new package is close to that.”

But while this news brings back some form of equilibrium to the state, the damage done by Walker and friends’ ill-advised publicity and money grab, remains. The site that was cleared and created for the original deal is reportedly “bigger than Central Park, with nearly 100 homes and small farms bulldozed to make way for Foxconn.”